A Column in The Washington Post Claimed Donald Trump 'Could Be the Most Honest President,' and Now Trump Is Quoting It 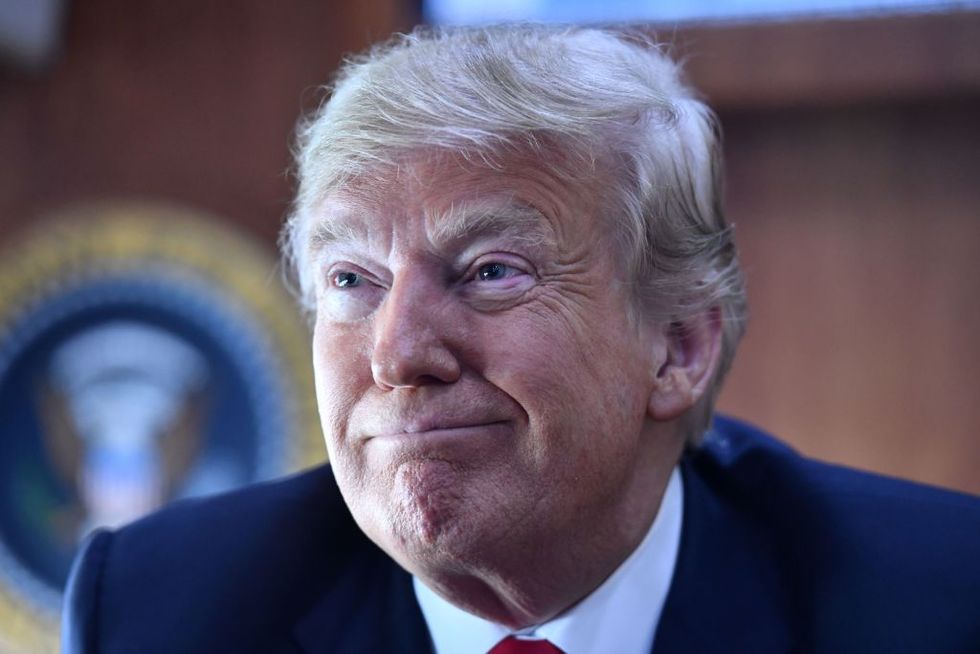 US President Donald Trump sits on Air Force One before a "Make America Great Again" rally in Topeka, Kansas, on October 6, 2018. (Photo by NICHOLAS KAMM/AFP/Getty Images)

Washington Post columnist Mark Thiessen wrote that President Donald Trump "may be remembered as the most honest president in American history," but his profile on the president isn't exactly flattering.

That hasn't stopped Trump from quoting the article, following a pattern of bragging whenever positive articles about him go to print.

“Trump could be the most honest president in modern history. When you look at the real barometer of presidential tr… https://t.co/uU1sR8gLon
— Donald J. Trump (@Donald J. Trump) 1539775821.0

It was George Conway, a noted Trump critic who is also the husband of presidential counselor Kellyanne Conway, who pointed out that in the sentence directly after the one Trump quoted, Thiessen wrote: "Don’t get me wrong, Trump lies all the time."

Thiessen notes, for example, that although Trump claims that he “enacted the biggest tax cuts and reforms in American history," these reforms were, in fact, the eighth largest on record. And despite Trump's insistence that “our economy is the strongest it’s ever been in the history of our country," its not exactly true. "In part, it’s a New York thing — everything is the biggest and the best," Thiessen writes.

Many took umbrage with the column––which, while not exactly flattering, is rather apologetic in its defense of the president, whom Thiessen admits "takes liberties with the truth" but has nonetheless "compiled a remarkable record of presidential promise," including "historic increases in defense spending," and "renegotiating NAFTA and the U.S.-Korea Free Trade Agreement." ("Where Trump has failed to keep promises, such as building the wall or repealing Obamacare, it has not been for a lack of trying," Thiessen wrote.)

@realDonaldTrump Say this in front of the UN next time, it will get a bigger laugh than your last appearance.
— Corinne Potter (@Corinne Potter) 1539786484.0

@realDonaldTrump This tweet of yours is a bit like the @normmacdonald comedy bit, where he makes the case that Tige… https://t.co/kGzM7SomFq
— Chad Greve (@Chad Greve) 1539788248.0

The Washington Post recently estimated that Trump has made more than 5,000 false or misleading claims since taking office.

"That’s an average of 8.3 Trumpian claims a day, but in the past nine days — since our last update — the president has averaged 32 claims a day," the paper reported on September 13. The paper also observed that on September 7, Trump "publicly made 125 false or misleading statements — in a period of time that totaled only about 120 minutes. It was a new single-day high."

Trump had once criticized Thiessen. In 2015, he referred to him in a tweet as "a failed Bush speechwriter" and "A third rate talent."

.@marcthiessen is a failed Bush speechwriter whose work was so bad that he has never been able to make a comeback. A third rate talent!
— Donald J. Trump (@Donald J. Trump) 1444961546.0

It's true that Trump has delivered in quite a few respects. But whether the promises he's kept are beneficial to the country is a different matter.

Trump has often blamed Democrats for issues regarding the GOP tax plan even though the Republican Party has control of Congress. He once claimed that “the only people” who don’t care for the tax proposal are those who “don’t understand” it and the “Obstructionist Democrats.”

His comment came on the heels of a Quinnipiac University poll which found that 53 percent of U.S. voters disapproved of the Republican tax plan. That poll found that 64 percent of Americans believed that the plan, if passed, would benefit only the nation’s wealthiest citizens, while only 24 percent think the middle class would benefit. Just 5 percent believe the plan would benefit those in the lowest income bracket.

And last year, a troubling report from the nonpartisan Congressional Budget Office (CBO) revealed that the plan “gives substantial tax cuts and benefits to Americans earning more than $100,000 a year”––hitting the nation’s poorest citizens particularly hard––and that the legislation would “add an increase in the deficit of $1,414 billion over the next 10 years.”