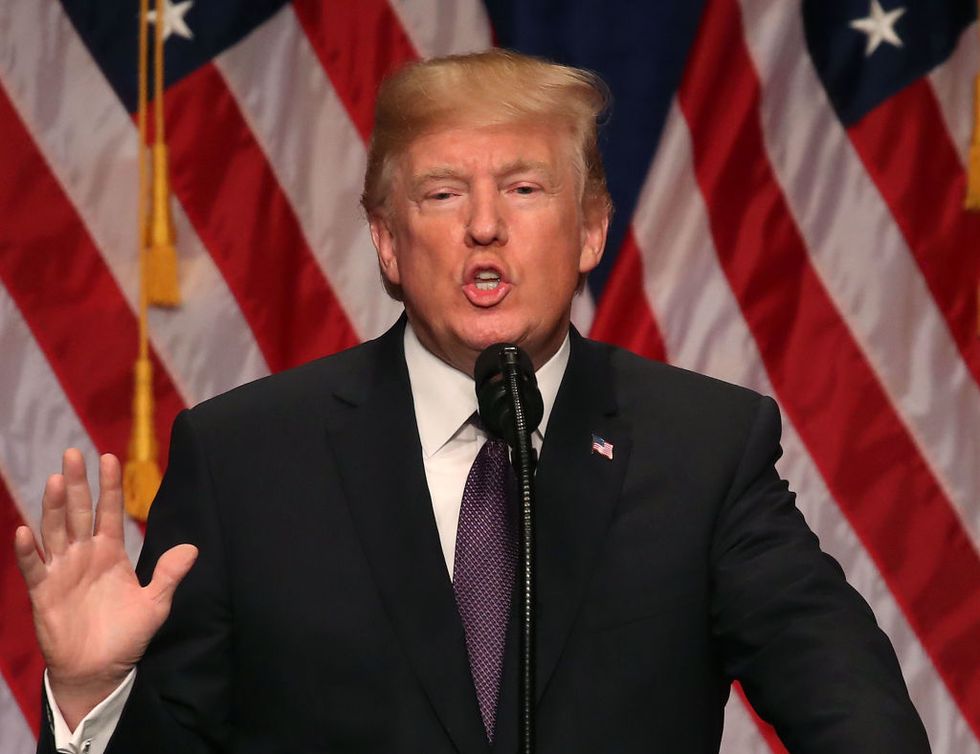 WASHINGTON, DC - DECEMBER 18: U.S. President Donald Trump delivers a speech at the Ronald Reagan Building December 18, 2017 in Washington, DC. The president was expected to outline a new strategy for U.S. foreign policy through the release of the periodic National Security Strategy, a document that aims to outline major national security concerns and the administration's plans to deal with them. (Mark Wilson/Getty Images)

59 percent of American voters say in a Quinnipiac University poll released yesterday that President Donald Trump's job performance is poor, citing his moral character deficits. Trump received low marks despite the 63 percent of those surveyed who said the economy is "excellent" or "good." Even so, more people credited former President Barack Obama (45 percent, including 29 percent of Republicans) than Trump (29 percent) for that success.

The president's grades on most character traits are as follows:

Those who participated in the survey gave Trump negative ratings for the way he has handled several key issues:

Even more damning: Fifty percent of American voters, including 59 percent of women and 41 percent of men, say Trump should resign because of the sexual assault allegations against him. Democrats (85 - 12 percent) have been the most vocal about calling for Trump's resignation. Independents are more finely split (52 - 44 percent) while the overwhelming majority of Republicans 92 - 7 percent say the president should not resign.

Still, the poll notes, voters are divided 44 - 44 percent "on whether they approve of how the Democratic Party is handling the issue of sexual harassment and sexual assault in politics" (which is an improvement on the negative 30 - 52 percent approval rating December 6). By contrast, voters disapprove 65 - 23 percent of how the Republican Party is handling sexual harassment and sexual assault in politics, and Republicans only approve by a "lackluster" 46 - 37 percent.

The survey results also show that most people (66 - 30 percent) believe Trump does not respect women as much as he respects men. Those numbers include 73 - 25 percent among women and 59 - 36 percent among men.

"Confidence in the economy is eclipsed by profound doubts about the president's level headedness, honesty, empathy for fellow Americans and handling of foreign policy," said Tim Malloy, assistant director of the Quinnipiac University Poll. "A big bag of coal under the Mar-a-Lago tree from a voting public that has little confidence in the president."

Quinnipiac University surveyed 1,230 voters nationwide from December 13 - 18 with a margin of error of +/- 3.3 percentage points, including the design effect. Live interviewers called landlines and cell phones.

The Quinnipiac University poll comes on the heels of a USA Today editorial which issued a scathing rebuke of the president, accusing him of impugning the dignity of the Oval Office.

The editorial board eviscerated Trump as “not fit to clean the toilets in Obama’s presidential library or to shine George W. Bush’s shoes” after he attacked Senator Kirsten Gillibrand when she called on him to resign. Many criticized the president's words as sexually suggestive and demeaning, though the White House denied there was anything suggestive about the post.

Lightweight Senator Kirsten Gillibrand, a total flunky for Chuck Schumer and someone who would come to my office “b… https://t.co/L8fAyMgZ8M
— Donald J. Trump (@Donald J. Trump) 1513083815.0

A new NBC News/Wall Street Journal poll has even more disappointing news for the president and his supporters: Just 36 percent of Americans say they would vote for Trump in 2020, while half indicate that they’ll definitely or probably support his Democratic general election opponent.

Just 18 percent of those surveyed believe that they will "definitely" support Trump if he runs in the next presidential election; another 18 percent were less decisive, saying that they’ll "probably" choose him. But, NBC notes, "a significant chunk — 38 percent — say they’re dead set on voting against the GOP commander-in-chief, with an additional 14 percent saying that they’ll probably vote for the Democrat on the ballot."

Additionally, some of Trump’s key coalition groups have shown a drop in their support since the 2016 election. For example, according to exit polls, 66 percent of white voters without a college degree backed Trump over Hillary Clinton, but just 47 percent now say that they will definitely or probably support him in 2020. The decline is similar among rural voters; 61 percent of rural voters supported Trump in 2016, while just 43 percent say they’re confident they’ll be in his corner in three years.

As Trump’s first year in office comes to a close, three-in-ten Americans overall say that the country is better off than it was when he became president, while 45 percent say it is in worse shape. Another 24 percent say that the state of the nation is about the same as when Trump took office.