Trump Supporting CEO Just Savaged Trump for His Economic Policies, And Yep, He May Have to Move His Factory to Mexico 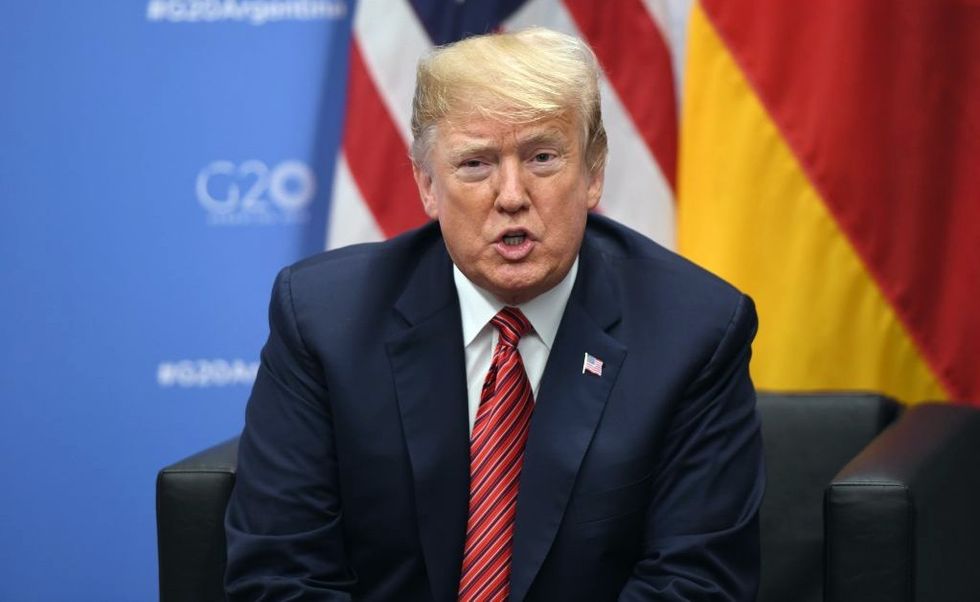 US President Donald Trump speaks during a bilateral meeting with Germany's Chancellor Angela Merkel, on the sidelines of the G20 Leaders' Summit in Buenos Aires, on December 01, 2018. (Photo by SAUL LOEB/AFP/Getty Images)

Pat LeBlanc, the chairman of EBW Electronics, is a Republican who voted for Donald Trump in the 2016 presidential election. Two years later, he says he feels "betrayed" and that his factory may have to move to Mexico because of the president's tariffs, which will likely slice his 2019 profits in half.

“It’s killing us,” he said. “I just feel so betrayed. If we fail because the company is being harmed by the government, that just makes me sick.”

These comments are a striking about-face from remarks LeBlanc made in 2013. At the time, EBW was ranked as one of the fastest growing companies in the Midwest.

“Yeah, we’re adding jobs and we’re growing faster than anyone else,” told The Holland Sentinel at the time. “Getting into LEDs is what really propelled us. And we’re not moving to Mexico.”

Cory Steeby, EBW’s president, says the tariffs on steel and aluminum imports were “a tax that comes right off the bottom line,” and that moving to Mexico appears to be the only way to avoid them.

“It totally incentivizes you to move out of the United States and build either in Canada or Mexico,” Steeby said. “These are active conversations right now.”

People weren't exactly sympathetic. The president did campaign on imposing tariffs despite the warnings of countless economists who predicted imposing them would drastically affect U.S. manufacturing plants.

This is kind of bewildering. A Trump supporter feeling "betrayed" by his tariffs. Didn't he explicitly campaign on… https://t.co/XjRqTuhqja
— Bryan Hickman (@Bryan Hickman) 1546875092.0

The president was criticized last week for failing to understand how tariffs operate after he claimed that tariffs have "absolutely hurt China"––his primary target.

Trump says "nobody understands how well our economy is doing," then immediately shows he doesn't get how tariffs wo… https://t.co/s8wJyYNDto
— Aaron Rupar (@Aaron Rupar) 1546796596.0

The president remains steadfast in his belief that tariffs are necessary to address the signs of what he believes to be an era of waning American influence on international markets.

In March, shortly before confirming that the U.S. would impose tariffs on aluminum and steel, Trump attracted criticism for claiming that trade wars “are good, and easy to win.”

“When a country (USA) is losing many billions of dollars on trade with virtually every country it does business with, trade wars are good, and easy to win,” he wrote at the time. “Example, when we are down $100 billion with a certain country and they get cute, don’t trade anymore-we win big. It’s easy!”

The president appeared to ignore much of the controversy surrounding his announcement. Instead, he doubled down on his belief that “We must protect our country and our workers.”

Later, he seemed to offer justifications for his decision, writing: “When a country Taxes our products coming in at, say, 50%, and we Tax the same product coming into our country at ZERO, not fair or smart. We will soon be starting RECIPROCAL TAXES so that we will charge the same thing as they charge us. $800 Billion Trade Deficit-have no choice!”

Trump’s tweets came as the U.S. and China sparred tensely after Trump announced an additional $200 billion in tariffs on Chinese goods, in an attempt to get businesses to use less Chinese-produced goods and opt for goods made in the U.S. or by allies with whom the country has less precarious trade relationships.

Trump’s tariffs also focus on intermediary goods, or parts, which many small-to-medium-sized U.S. businesses use to make finished products. Consequently, the increased cost of parts place businesses into positions where they must either raise prices on their goods and pass the cost on to the consumer, reduce their workforce, or shutter U.S. operations and move overseas to avoid tariffs altogether.