Take that back to InfoWars where it belongs. 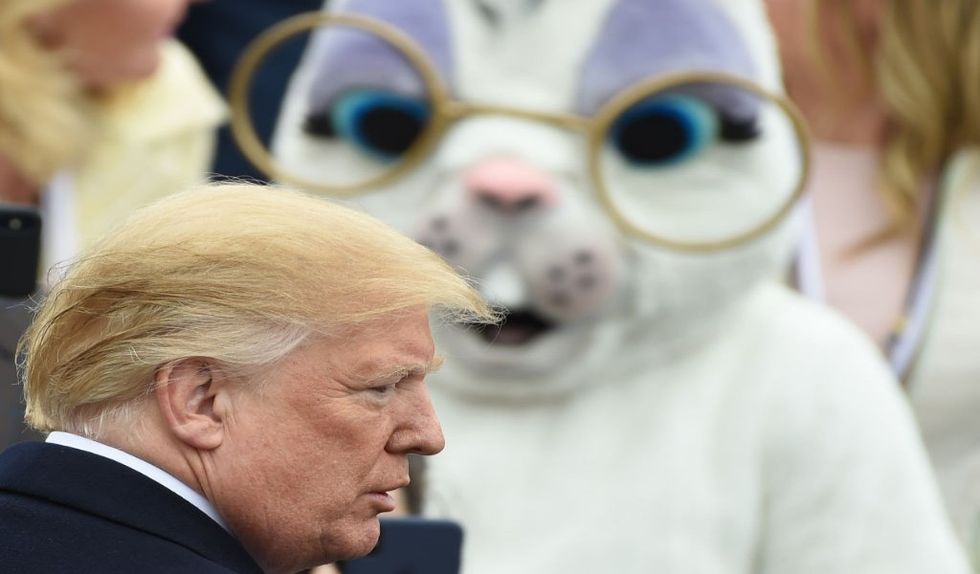 US President Donald Trump looks on near the Easter Bunny during Easter celebrations at the White House in Washington, DC, on April 2, 2018. (Photo credit should read Andrew Caballero-Reynolds/AFP/Getty Images)

During a tax reform discussion in West Virginia Thursday, President Donald Trump repeated an unfounded claim he has made many times: millions of people voted illegally in the 2016 election. The president failed to provide any evidence for his claim each time.

This time the president called out the state of California. Trump lost in California in 2016 and maintains a contentious relationship with the state.

"In many places the same person in California votes many times," Trump stated.

And Trump was correct. He is being called a conspiracy theorist.

California Democratic Secretary of State Alex Padilla responded to Trump's latest attack on the state,  dismissing the President as "a conspiracy theorist."

His dishonesty and his rants dishonor the thousands of local elections officials and volunteers who work hard to administer our elections with integrity," the statement said. "Trump was even forced to dissolve his sham election commission, which was a waste of taxpayer dollars and failed to provide a shred of evidence to support his voter fraud lies."

In 2016, Trump won the Electoral College but lost the popular vote.

At the time, and ever since, rather than conceding his opponent gained more votes, Trump claimed he won "if you deduct the millions of people who voted illegally."

In a political commentary, CNN White House reporter Stephen Collinson said "Donald Trump often acts like a President touting a solution in search of a problem."

Whether it's because of his own conspiratorial mindset, a desire to keep political loyalists engaged or a lack of interest in dry policy details, Trump frequently acts to address an idiosyncratic version of reality. ...Trump has often waded in to tackle what he bills as a national emergency that few other people see.

A collection of research, provided by the Brennan Center for Justice at New York University Law School, found no evidence for Trump's claim of widespread voter fraud in the United States. Study after study, commission after commission, yielded the same results for years and continue to.

"The president has continued to claim voter fraud was a problem in the 2016 election," states the Brennan Center for Justice report.

But a look at the facts makes clear fraud is vanishingly rare, and does not happen on a scale even close to that necessary to “rig” an election.

The White House provided no evidence of widespread voter fraud when they made their claims. But after Trump's repeated statements about his loss in the popular election being the result of massive voter fraud directed only at himself, as Republicans maintained control of the House and Senate, a commission to investigate the issue was created last year.

On May 11, 2017, Trump signed an executive order creating the “Presidential Advisory Commission on Election Integrity.”

Vice President Mike Pence was chair, and Kansas Secretary of State Kris Kobach — one of the nation’s leading promoters of the myth of voter fraud and laws restricting access to voting — was vice chair. Trump stacked the deck with people from leading conservative organizations like Hans von Spakovsky of the Heritage Foundation and J. Christian Adams of the Public Interest Legal Foundation.

The commission, unable to find any evidence of massive or even minor voter fraud large enough to account for Trump's popular vote loss, shut down in early January 2018. Trump tweeted the system "rigged" for not finding any evidence to back his claims explaining his loss.

People didn't quite agree with the president's assessment.

@realDonaldTrump They refused because it was a fraudulent commission looking for info to further suppress the vote… https://t.co/BptMJDopEI
— dawn h (@dawn h) 1515075624.0