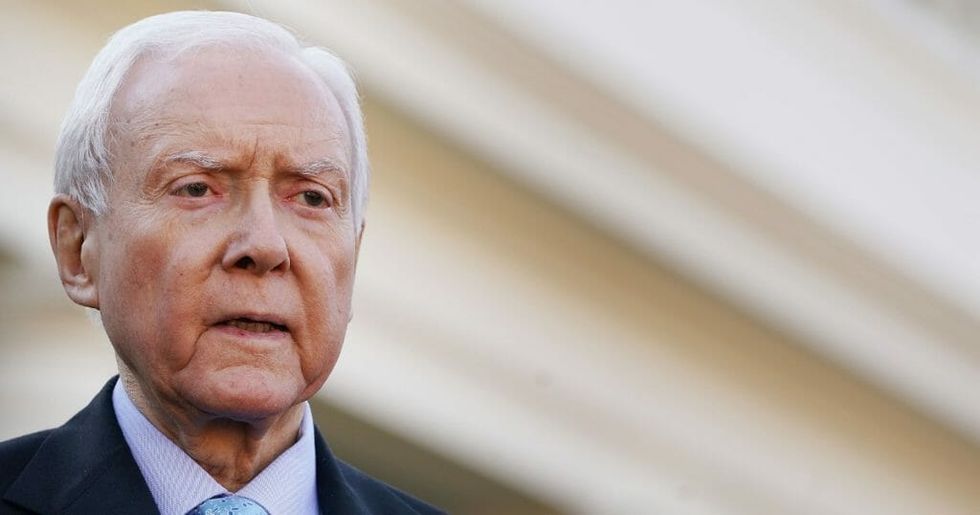 Senator Orrin Hatch (R-UT) made an insensitive and seemingly tone-deaf comment about Dr. Christine Blasey Ford during a break following her first round of testimony before the Senate Judiciary Committee.

Hatch was approached by reporters as he exited the hearing room.

"And have you found Dr. Ford credible?" Hatch was asked.

"Well, it's too early to say. I don’t find her un-credible," Hatch told reporters.

"I think she’s a very attractive, good witness, and that it's way early."

Clarification was requested by CNN's Elizabeth Landers: "What do you mean by 'attractive,' sir?"

A spokesman for the Utah Republican said Hatch used the word "attractive" to "describe personalities, not appearances."

Ford has been testifying before the Committee about her allegations that Supreme Court nominee Brett Kavanaugh attempted to rape her at a house party while the two were in high school.

Outrage flooded social media over Hatch's comments. Why would he use the word "attractive" to describe a victim of sexual assault?

@kaitlancollins @ElizLanders And there you have it. Misogyny alive and well even in the seriousness of this discuss… https://t.co/W11AeudtiK
— flavicann (@flavicann) 1538068043.0

@ABC So @OrrinHatch does this mean if she wasn't attractive you wouldn't believe her? This woman is telling the truth! #NoKavanaughSCOTUS
— Blue No Matter Who (@Blue No Matter Who) 1538070676.0

"Stepping on a rake" is a fitting analogy.

Hatch's lack of empathy for victims of sexual misconduct echo from 1991, when Anita Hill accused Clarence Thomas of sexual harassment before his confirmation hearings. He was later confirmed to the Court. Hatch was on the Senate Judiciary Committee for that hearing as well.

"And there's no question in my mind she was coached by special interest groups," he told the Deseret News in an interview. "Her story's too contrived. It's so slick it doesn't compute."

He accused Hill of stealing from other instances of sexual assault and using them to frame her narrative. This included a sexual harassment case in Kansas and an excerpt from the book, The Exorcist.

"They didn't think we would find those references," Hatch said of Hill and her supporters. "She didn't bring those instances up when she was interviewed by the FBI. But she brought them up with the committee. It's too contrived, too slick. The language was so unusual she would have had to remember it when the FBI interviewed her."

Hatch also insinuated that the charges against Thomas were part of a conspiracy to smear his name.

"They wanted to turn whites against this man. It was a reverse Willie Horton," Hatch said.

"She followed him from job to job. How could she do that if he was guilty of that gruesome, sexual harassment? the Senator asked. "He's gone through four confirmation hearings. Why would she wait to bring up her allegations until now?"

"How would any intelligent male who would want to date a woman say things like she alleges?" Hatch said. "And she claims he was trying to seduce her with language like that."

Hatch added: "All the people who really know Judge Thomas believe him. I've known him for 11 years, and I don't believe he is capable of that kind of harassment."

"I think he will be confirmed," Hatch predicted. "But we still have a tough fight ahead, and another day of hearings tomorrow."

The Senate Judiciary Committee is scheduled to vote on Kavanaugh tomorrow.