North Korea Just Slammed the U.S. Over Denuclearization Talks After Meeting With Trump's Secretary of State 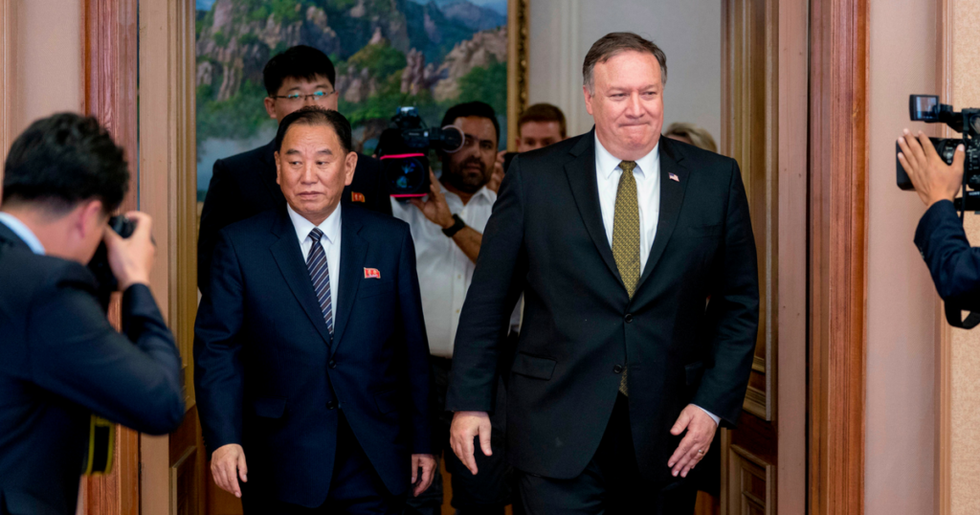 North Korea has responded to U.S. Secretary of State Mike Pompeo's latest visit to the nuclear-armed country, describing American attempts to get the country to denuclearize as "regrettable," "gangster-like" and "cancerous" in a statement released by Korea Central News Agency on Saturday.

The state-run news agency said the United States pressed "the same cancerous" issues that have been brought up in past meetings and that pressure from the U.S. to give up its nuclear weapons was a breach of the agreement signed by the two nations in Singapore last month.

President Donald Trump tweeted Monday morning he has "confidence" Kim Jong Un "will honor the contract" and "even more importantly, our handshake," although no specific details on denuclearization were agreed upon and the agreement the two leaders signed was not binding.

Trump also suggested that China may be "exerting negative pressure" on North Korea in response to the budding trade war he started by imposing tariffs on imported Chinese goods.

"We agreed to the denuclearization of North Korea."

“The U.S. side came up only with its unilateral and gangster-like demand for denuclearization,” the statement said. “The issues the U.S. side insisted on during the talks were the same cancerous ones that the past U.S. administrations had insisted on."

"We expected the US to bring constructive measures to build confidence in accordance with the spirit of the US-NK Summit," KCNA said. "However, the attitude of the US in the first high-level talks held on the 6th and 7th were indeed regrettable."

Pompeo did not meet with leader Kim Jong Un during his three-day visit last week. KCNA said that even though Kim still believes in Trump's desire to negotiate, Pompeo's visit pushed tensions to a “dangerous” stage that could “rattle our willingness for denuclearization.”

On Sunday, Pompeo dismissed the North Korean's characterizations of his trip, telling Japanese and South Korean officials that his talks with North Korean leadership had been productive. Pompeo insisted that North Korea has maintained their commitment to work toward denuclearization, including an eventual surrender of its nuclear weapons.

Proving once again that only fools rush in, Trump forced a summit for cheap headlines. In the process, he gave legi… https://t.co/DpWiqWUfmH
— Joe Scarborough (@Joe Scarborough) 1531008565.0

"We had detailed, substantive conversations about the next steps toward a fully verified and complete denuclearization," he said. "People are going to make stray comments after meetings. If I paid attention to what the press said, I'd go nuts. I am determined to achieve the commitment that President Trump made, and I'm counting on chairman Kim to be determined to follow through on the commitment that he made."

There will be a verification connected to the complete denuclearization, that's what President Trump and Chairman Kim both agreed to.

Pompeo added on Sunday night that "President Trump believes your country can replicate this path -- it's yours if you'll seize the moment. The miracle can be yours," citing Vietnam's "incredible rise" in recent decades as a result of sustaining a relationship with the United States.

“They’re upping the ante for what they want, and downplaying what we want,” Bill Richardson, the former New Mexico governor who has negotiated with North Korea, said on Sunday. This is typical. They’re very skilled at sending messages. And their message is that this negotiation is not going to be easy. And it’s going to be very costly. So you’d better be prepared to deliver.”

“Pompeo appears to have presented the North Koreans with some demands and requirements for real moves toward denuclearization, as opposed to the symbolic steps and empty language Pyongyang has been using so far. He deserves credit for doing so,” Revere wrote in an email.

“But in doing so, he has elicited North Korean ire, and he has now seen the reality of North Korea’s game plan and intentions that many of us have been describing for some time,” Revere added. “Welcome to our world, Mr. Secretary.”