Colin Kaepernick Just Unveiled His Full Length Nike Ad, and the Internet Has a Lot of Feelings 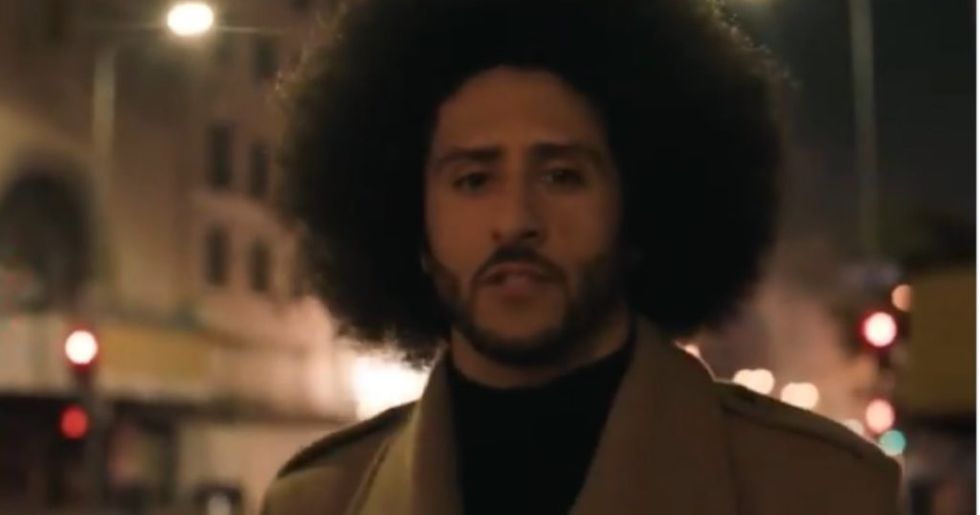 Former NFL star Colin Kaepernick revealed his new ad with Nike on Wednesday after the athlete entered into an agreement to be the face of the 30th anniversary of the company's "Just Do It" campaign.

In the ad, Kaepernick's voice complements footage of young athletes, some with disabilities, striving to be the best performers they can be.

"If they laugh at what you think you can do, good, stay the way," the ad begins. "Because what non-believers fail to understand is that calling a dream crazy is not an insult. It's a compliment."

The ad journeys through footage of athletes of all ages, races, abilities, and genders, with Kaepernick encouraging viewers to strive to be the best in the world at what they are doing.

"Be the fastest ever," Kaepernick says. "Don't settle for homecoming queen or linebacker. Do both."

Don't believe you have to be like anybody to be somebody.

The ad then pivots to professional sports, citing LeBron James' dedication of a school, before cutting to Kaepernick.

"Believe in something, even if it means sacrificing everything," Kaepernick says. "So don't ask if your dreams are crazy. Ask if they're crazy enough."

Kaepernick starred in the inspiring ad after sacrificing his career as an NFL quarterback while protesting police brutality against people of color. He famously "took a knee" during an NFL game in 2016, sparking a national debate over free speech and whether NFL players should be forced to stand during the national anthem.

On Tuesday, President Donald Trump said Nike was sending a "terrible message" by signing with Kaepernick.

Trump did acknowledge, however, that there are legitimate arguments on both sides of the debate.

"In another way, it is what this country is all about," Trump conceded, "that you have certain freedoms to do things that other people think you shouldn't do, but I personally am on a different side of it."

Reactions to the ad were mixed on social media. Many praised Nike and Kaepernick for standing up for free speech and social justice.

Even a veteran chimed in to support Kaepernick.

Since the ad aired, scores of Nike customers, mostly white conservatives, have been destroying their Nike products in protest.

These acts of self-defeating defiance, however, likely won't sway Nike at all.

Others criticized Kaepernick's claims of "sacrifice," noting that he is still getting paid a lot of money and gets to keep his fame.

Kaepernick has, in fact, donated time and money to underprivileged communities.

Most people, though, were supportive of the campaign.

@Kaepernick7 @Nike I just followed @Nike because of their support of @Kaepernick7 ! If you understand what this i… https://t.co/6qTQgRbzkN
— Darlene Morse (@Darlene Morse) 1536074741.0

There is a tinge of hypocrisy to those boycotting Nike, too.

Nike's ad is a powerful reminder that embracing diversity strengthens all of us and that everyone deserves the opportunity to succeed.