Shooter in New Zealand Attacks Revealed He Was Inspired by U.S. Mass Shooters and Supports Donald Trump in One Very Disturbing Way 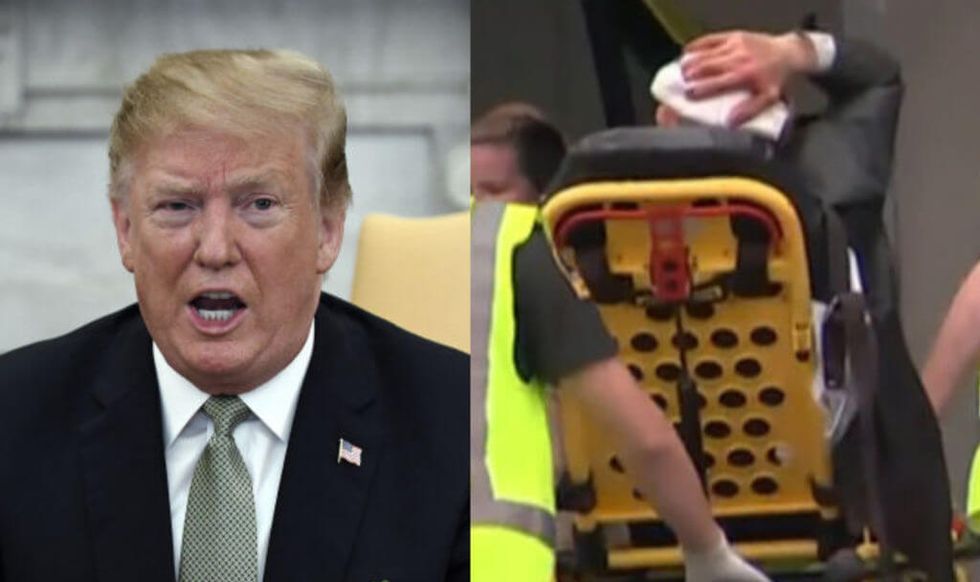 The terrorist that massacred at least 49 people in New Zealand admired President Donald Trump's white nationalist and anti-Muslim rhetoric, according to a manifesto the Australian national published online before the attack.

The individual, clad in military gear and whose vehicle was rigged with explosives, stormed into two mosques in Christchurch, New Zealand's largest city, and opened fire on unsuspecting Muslim worshipers. He live-streamed the attack and his attempted escape on Facebook.

The assailant wrote in his manifesto that he supports Trump "as a symbol of renewed white identity and common purpose," although "as a policymaker and leader? Dear god no.” He added that his other inspiration was Dylann Roof, the white supremacist who in 2015 murdered nine black worshipers in Charleston, South Carolina church.

Meanwhile, Trump offered his "warmest sympathy" and "best wishes" to the survivors and families of the victims "in the Mosques."

My warmest sympathy and best wishes goes out to the people of New Zealand after the horrible massacre in the Mosque… https://t.co/aS3y2KQGCP
— Donald J. Trump (@Donald J. Trump) 1552650078.0

The president's paltry response was not well-received.

@realDonaldTrump Even in the face of mass murder, you are unwilling to condemn white supremacy. The shooter, your f… https://t.co/yTtx7GZOtC
— Mia Farrow (@Mia Farrow) 1552661151.0

What a legacy Trump has crafted for himself, stemming in part from his ban on Muslims entering the United States.

@realDonaldTrump As the President of the United States, one of your first acts was to ban Muslims. Your hateful, an… https://t.co/VOA2OWukjO
— Mia Farrow (@Mia Farrow) 1552659148.0

@realDonaldTrump The hatred you stoke against Muslims, against immigrants, against the press, against ‘others’- yo… https://t.co/YKZ6bSIdvA
— Mia Farrow (@Mia Farrow) 1552656022.0

True to form, right after offering "best wishes," Trump launched a fresh attack on the FBI and American intelligence agencies.

“'New evidence that the Obama era team of the FBI, DOJ & CIA were working together to Spy on (and take out) President Trump, all the way back in 2015,' Trump said, quoting Fox News. A transcript of Peter Strzok’s testimony is devastating. Hopefully the Mueller Report will be covering this. @OANN @foxandfriends"

Despite a unanimous vote in the House on Thursday supporting a full release of Special Counsel Robert Mueller's anticipated Russia report, Trump called on the report to be quashed.

"THIS SHOULD NEVER HAPPEN TO A PRESIDENT AGAIN," he tweeted.

Trump managed one rushed tweet for New Zealand among a blizzard of panicky posts about himself.

@realDonaldTrump Jesus, Donald, dozens of people were killed in a terror attack in New Zealand and this is what you… https://t.co/3TNRty1gQ9
— Amanda Jetté Knox (@Amanda Jetté Knox) 1552661086.0

@realDonaldTrump Your "best wishes" to another senseless human massacre invoking your name in the manifesto didn't… https://t.co/brsYvql3v2
— Bros4America (@Bros4America) 1552663784.0