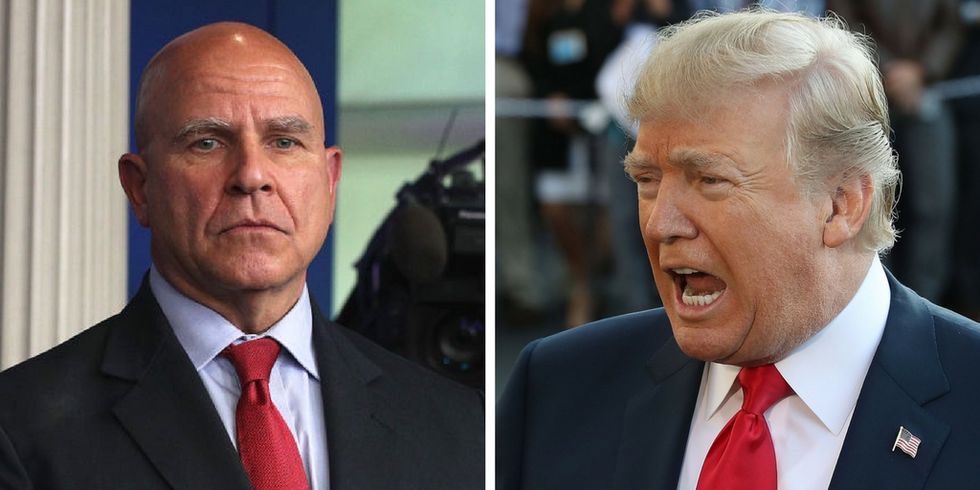 It was reported last month that back in July, following a meeting in which President Donald Trump was briefed on nuclear weapon assessments worldwide, Secretary of State Rex Tillerson referred to the president as a "moron." Now "idiot" and "dope" can be added to the list of disparaging descriptions Trump's own cabinet members use to describe his inferior intellect, this time voiced by National Security Adviser Herbert Raymond ("H. R.") McMaster.

According to a report by BuzzFeed News' Joe Bernstein, multiples anonymous sources have knowledge of McMaster mocking "President Trump’s intelligence at a private dinner with a powerful tech CEO."

Over a July dinner with Oracle CEO Safra Catz — who has been mentioned as a candidate for several potential administration jobs — McMaster bluntly trashed his boss, said the sources, four of whom told BuzzFeed News they heard about the exchange directly from Catz. The top national security official dismissed the president variously as an “idiot” and a “dope” with the intelligence of a “kindergartner,” the sources said.

The National Security Council's official statement is in line with the White House.

“Actual participants in the dinner deny that General McMaster made any of the comments attributed to him by anonymous sources. Those false comments represent the diametric opposite of General McMaster's actual views,” said Michael Anton, a spokesman for the National Security Council.

Unlike Trump's lack of military experience, McMaster is a three star general in the United States Army, as well as a respected military author with a Ph.D. from the University of North Carolina. He has yet to release a statement of his own.

The dinner took place on July 18 at a Washington, D.C. restaurant, and Bernstein's sources claim the conversation ranged fare beyond geopolitics. Allegedly, McMaster criticized and disparaged not only Trump, but also Tillerson, Secretary of Defense James Mattis, former White House chief strategist Steve Bannon, and President Trump’s son-in-law and senior adviser Jared Kushner, who McMaster believes has no business being in the White House.

One of his unnamed sources claims Oracle's Catz said the conversation was "inappropriate" and "jaw-dropping."

Tillerson and McMaster would not be the only two in Trump's administration concerned about his temperament and intellectual ability to handle the job of the Oval Office. Last month the New York Times reported that Republican Senator Bob Corker and a group of senior administration officials are working together to keep Trump under control.

“I know for a fact that every single day at the White House, it’s a situation of trying to contain him,” Senator Corker said in a telephone interview with the New York Times. He added that he is not alone in his party.