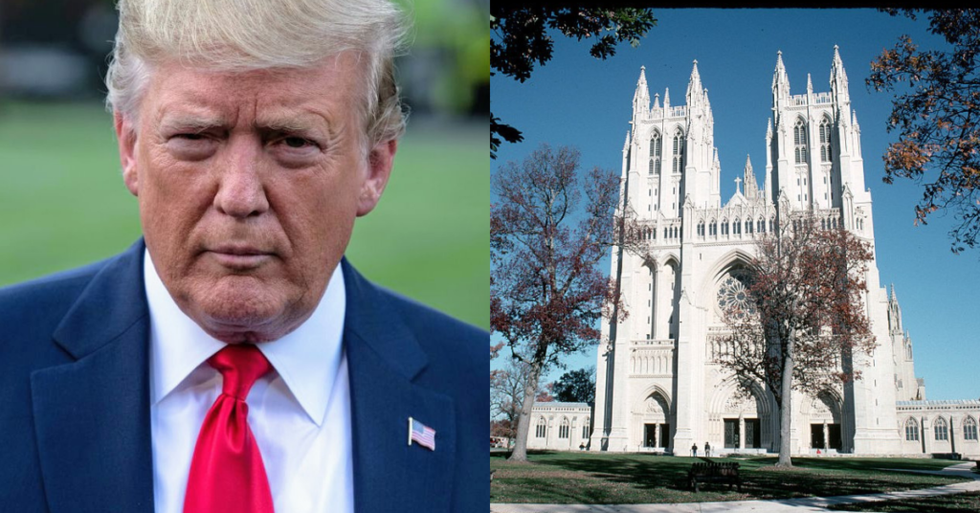 On Tuesday, July 30, 2019, the clergy of the Washington National Cathedral had had enough. And they asked when others in the United States would too.

The National Cathedral issued a rare public statement titled "Have We No Decency? A Response to President Trump."

"The escalation of racialized rhetoric from the President of the United States has evoked responses from all sides of the political spectrum."

"On one side, African American leaders have led the way in rightfully expressing outrage. On the other, those aligned with the President seek to downplay the racial overtones of his attacks, or remain silent."

The leaders then asked a pressing question:

"As faith leaders who serve at Washington National Cathedral—the sacred space where America gathers at moments of national significance—we feel compelled to ask: After two years of President Trump’s words and actions, when will Americans have enough?"

The clergy then likened the present to Mccarthyism where:

"McCarthy had free rein to say and do whatever he wished. With unbridled speech, he stoked the fears of an anxious nation with lies; destroyed the careers of countless Americans; and bullied into submissive silence anyone who dared criticize him."

In regard to our present circumstances, they stated:

"We have come to accept a level of insult and abuse in political discourse that violates each person’s sacred identity as a child of God."

"We have come to accept as normal a steady stream of language and accusations coming from the highest office in the land that plays to racist elements in society."

"Not only did he insult a leader in the fight for racial justice and equality for all persons; not only did he savage the nations from which immigrants to this country have come; but now he has condemned the residents of an entire American city. Where will he go from here?"

"Make no mistake about it, words matter. And, Mr. Trump’s words are dangerous."

The statement condemned President Trump for issuing a call to action among White supremacists.

"These words are more than a 'dog-whistle'."

"When such violent dehumanizing words come from the President of the United States, they are a clarion call, and give cover, to White supremacists who consider people of color a sub-human 'infestation' in America."

"They serve as a call to action from those people to keep America great by ridding it of such infestation. Violent words lead to violent actions."

"When does silence become complicity? What will it take for us all to say, with one voice, that we have had enough? The question is less about the President’s sense of decency, but of ours."

"As leaders of faith who believe in the sacredness of every single human being, the time for silence is over."

"We must boldly stand witness against the bigotry, hatred, intolerance, and xenophobia that is hurled at us, especially when it comes from the highest offices of this nation. We must say that this will not be tolerated."

"To stay silent in the face of such rhetoric is for us to tacitly condone the violence of these words. We are compelled to take every opportunity to oppose the indecency and dehumanization that is racism, whether it comes to us through words or actions."

"We prayed for [President Trump] and his young Administration to have 'wisdom and grace in the exercise of their duties that they may serve all people of this nation, and promote the dignity and freedom of every person'."

"That remains our prayer today for us all."

The Cathedral clergy's stern rebuke of those who remain complicit resonated with others.

The Washington National Cathedral, church of presidents, takes on the President. Everything about this is extraordi… https://t.co/GQjgqTcJhV
— Susan Glasser (@Susan Glasser) 1564577742.0

When faith leaders condemn Trump’s words, we should take notice. But when those faith leaders oversee the Washingto… https://t.co/HoMjZsH5y9
— Chris Lu (@Chris Lu) 1564526712.0

The National Cathedral, which welcomes all religions and backgrounds, has now shared that value with our country. https://t.co/SJVjxLGfNm
— Chris Matthews (@Chris Matthews) 1564586193.0

"Washington National Cathedral holds a unique place at the intersection of sacred and civic life."

"As the Cathedral of the Episcopal Diocese of Washington, we strive to serve God and our neighbors as agents of reconciliation, a trusted voice of moral leadership and a sacred space where the country gathers during moments of national significance."

To learn more about the architecture and history of the Washington National Cathedral, the PBS documentary is available here.