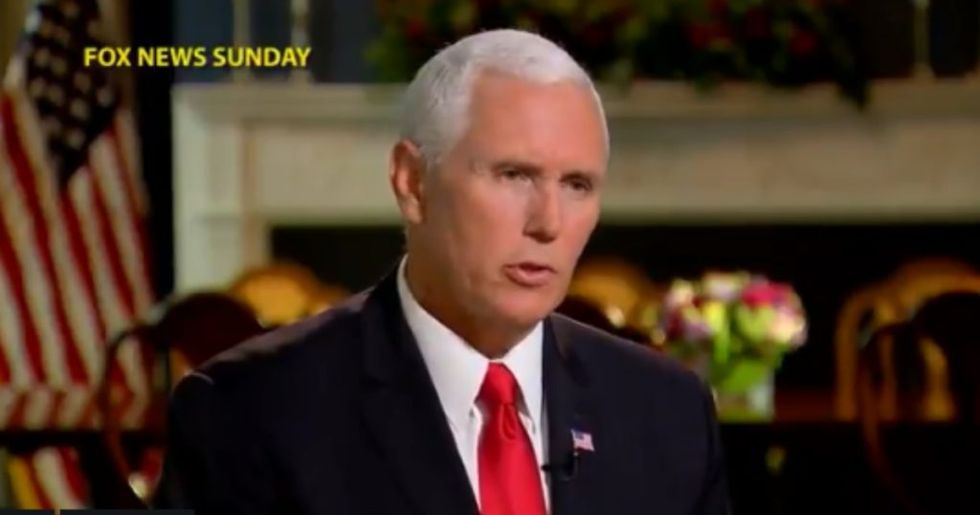 Vice President Mike Pence on Sunday said it was "very disappointing" to see former President Barack Obama hitting the campaign trail for Democrats ahead of the midterm elections.

"It was very disappointing to see President Obama break with the tradition of former presidents, and become so political," Pence told Chris Wallace on Fox News Sunday. "The American people in 2016 rejected the policy and direction of Barack Obama when they elected President Donald Trump."

Former Republican strategist Steve Schmidt, who left the GOP because of President Donald Trump, fired back at Pence, calling him the country's "most titanic fraud and quisling" and asking "what it would take for Trump to disappoint."

Actor Bradley Whitford, who starred in Aaron Sorkin's political epic The West Wing, took a jab at the administration's policy of separating children from their parents at the U.S.-Mexican border.

"Imagine how disappointed Jesus is to have people who call themselves Christians tearing children away from their mothers," Whitford wrote.

Aw.... Imagine how disappointed Jesus is to have people who call themselves Christians tearing children away from t… https://t.co/VLWe87sEFk
— Bradley Whitford (@Bradley Whitford) 1536522053.0

@WhitfordBradley Putting kids in cages, promoting racism and inequality, taking from the poor to give to the rich,… https://t.co/R8DL4yiRSw
— Frostreads (@Frostreads) 1536522596.0

@WhitfordBradley I was wondering how, "Jesus Pleaser" (@LastWeekTonight ), was living with himself doing something… https://t.co/iHDfiUdmjm
— Nick Campagna (@Nick Campagna) 1536535950.0

There were some poignant zingers lobbed at Pence too.

The blowback kept on coming.

Obama was recently voted the "best president in our lifetime."

Disappointing is having a president who is "racist, sexist, dishonest, divisive and corrupt," coupled with the "@GOP failing to hold him accountable."

Much of the country has been disappointed since November 8, 2016.

Let's not forget who won the popular vote.

@FoxNewsSunday @VP The majority did not reject the policies of President Obama, as you might recall
— Brian (@Brian) 1536456533.0

Obama has the right to say what he wants.

Unlike his predecessor George W. Bush, who has maintained a low profile since leaving office, Obama is getting involved in his party's effort to retake Congress. On Friday, the 44th president torched Trump and the Republican Party for their brand of divisive, nativist politics, though Trump was not mentioned by name.

"None of this is conservative," Obama told an auditorium of students at the University of Illinois at Urbana-Champaign. “I don’t mean to pretend I’m channeling Abraham Lincoln now, but that’s not what he had in mind, I think, when he helped form the Republican Party. It’s not conservative. It sure isn’t normal. It’s radical. It’s a vision that says the protection of our power and those who back us is all that matters even when it hurts the country.”

@FoxNewsSunday @VP I’m very grateful for @BarackObama ‘s straightforward words. They reenergized HOPE in those of u… https://t.co/SEhGETXt6Y
— Heal the World (@Heal the World) 1536483416.0

"It did not start with Donald Trump," Obama said. "He is a symptom, not the cause. He’s just capitalizing on resentments that politicians have been fanning for years, a fear and anger that’s rooted in our past, but it’s also born out of the enormous upheavals that have taken place in your brief lifetimes."

When asked what he thought of Obama's speech, Trump said he "fell asleep."

"I’m sorry, I watched it, but I fell asleep," Trump said. "I found he’s very good, very good for sleeping."