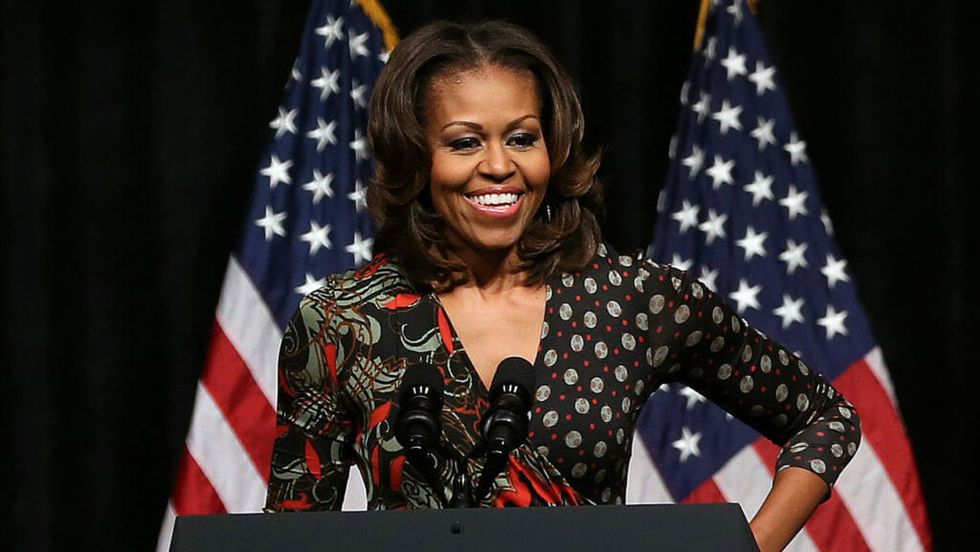 WASHINGTON, DC - NOVEMBER 12: First lady Michelle Obama speaks to students about higher education during an event at the Bell Multicultural High School, November 12, 2013 in Washington, DC. The first lady told students to commit to their education so that they can create a better future for themselves and their country. (Photo by Mark Wilson/Getty Images)

Former First Lady Michelle Obama had strong words for women who voted for President Donald Trump during a question-and-answer session with author Roxane Gay at Inbound, a marketing conference in Boston that has attracted a slew of distinguished speakers this week.

“Any woman who voted against Hillary Clinton voted against their own voice,” Obama told the audience. “It doesn’t say as much about Hillary, and everybody’s trying to worry about what it means for Hillary and no, no, no, what does this mean for us, as women? That we look at those two candidates, as women, and many of us said, ‘He’s better for me. His voice is more true to me.’ To me that just says, you don’t like your voice. You like the thing you’re told to like.”

Despite her criticisms, Obama maintained that she and her husband, former President Barack Obama, want Trump to be successful as president. "When you’ve been in that position, you have a different perspective," she said. But she did counter critics of the Affordable Care Act, which Republicans have tried––unsuccessfully––to repeal: “The Affordable Care Act isn’t Barack’s legacy. It’s the country’s legacy. We've chosen to be supportive of this administration. There was an entire party that didn't support my husband."

Obama announced she's writing a book about believing in our most authentic selves. The book, she said, will include stories from her childhood. "How did that little girl get to be here? How many of us have sat in a classroom somewhere and watched a man go on and on and on?” she asked the women in the audience. "We've been socialized to sit there and be quiet. We think in our heads 'maybe I'm wrong.' We have to be perfect."

Obama made headlines last year after she publicly endorsed Hillary Clinton and took Donald Trump to task in her address at the Democratic National Convention. Though Obama never mentioned Trump by name, she emphasized the importance of not allowing a certain “bully” to become President.

“Barack [Obama] and I think about every day as we try to guide and protect our girls through the challenges of this unusual life in the spotlight,” she said at the time. “How we urge them to ignore those who question their father’s citizenship or faith. How we insist that the hateful language they hear from public figures on TV does not represent the true spirit of this country. How we explain that once someone is cruel or acts like a bully, you don’t stoop to their level. No, our motto is, ‘when they go low, we go high.’ With every word we utter, with every action we take, we know our kids are watching us.”