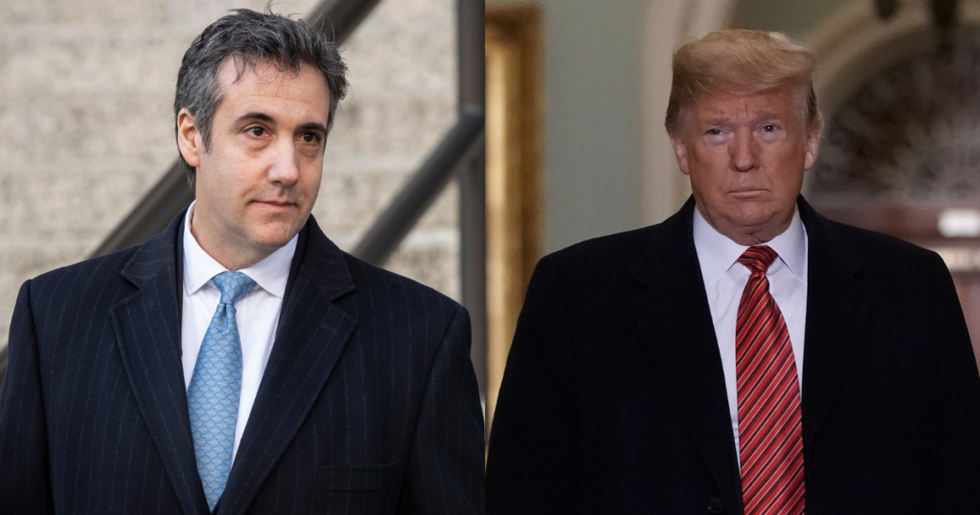 President Donald Trump lashed out on Twitter against his former attorney Michael Cohen on Friday morning, accusing Cohen of lying about having never asked for a presidential pardon.

Cohen swore under oath before the House Oversight Committee that he never sought a pardon from Trump. Days later, reports emerged which question the accuracy of Cohen's testimony.

Trump's tweet sparked a tit-for-tat between the two men. Cohen responded by calling Trump a liar and hammering the president on his treatment of the two women whose silence Cohen bought at the behest of his boss a few weeks before the 2016 election.

"Just another set of lies by @POTUS @realdonaldtrump," wrote Cohen. "Mr. President...let me remind you that today is #InternationalWomensDay. You may want use today to apologize for your own #lies and #DirtyDeeds to women like Karen McDougal and [Stormy Daniels]."

Cohen's willingness to throw Trump under the bus is the mid-season entertainment we need.

Cohen worked with Trump for more than a decade. We are not going to forget that it was Cohen's job to lie for Trump and act as his "fixer" for the better part of ten years.

@realDonaldTrump Not sure it's such a great idea for you to offer up this line that Cohen asked you for a pardon...… https://t.co/oWmlEMHDau
— David Rothkopf (@David Rothkopf) 1552061605.0

Sure, Cohen certainly regrets getting caught, but he is doing his darnedest to make things right.

The resistance needs all the help it can get.

@MichaelCohen212 @POTUS @realDonaldTrump And his previous wives ... along with all the other women he's harassed and/or assaulted.
— Jerry Sukys (@Jerry Sukys) 1552063177.0

The Atlantic's Natasha Bertrand made an important observation as the legal waters become murkier:

"Cohen said the last time he spoke to Trump was 'within 2 months' of the April FBI raid—and that the conversation is 'actually something that's being investigated right now by the Southern District of New York.' Meanwhile, Trump just admitted to speaking to Cohen about pardons."

Cohen said the last time he spoke to Trump was "within 2 months" of the April FBI raid—and that the conversation is… https://t.co/R12Bp7HvmO
— Natasha Bertrand (@Natasha Bertrand) 1552066385.0

Indeed, on April 28, 2018, Trump said it was a "stupid question" if he had offered Cohen a pardon but did not explicitly deny that any conversations took place. If there were talks, dangling a pardon could amount to obstruction of justice.

Cohen's legal counsel Lanny Davis said earlier this week that members on Trump's legal team "dangled" pardons for Cohen, so Cohen had one of his attorneys at the time, Stephen Ryan, ask about it.

“They had been dangling it for a while, and it was a constant refrain,” Davis said. “So Michael had his attorney reach out to Rudolph W. Giuliani.”

Giuliani, Trump's TV lawyer, refused to say whether Trump had teased the possibility of pardoning Cohen.

“I can’t confirm or deny whether I had a conversation with any of the attorneys because it’s attorney-client privilege, but what I can say is that I’ve said the same thing to everyone, privately and publicly, which is that the president is not considering pardons at this time," Giuliani said on Wednesday. “If Michael Cohen waives attorney-client privilege on this question, I’d be happy to say more, but he may not want to do that and have me do that.”

Since last week, Cohen has testified before Congress four times, answering questions and providing evidence of his role in decades of criminal schemes involving Trump and his businesses. Included in those offenses are the now infamous hush money payments - campaign violations to which Cohen pleaded guilty and implicated Trump - to Karen McDougal and Stormy Daniels (Stephanie Clifford).

Cohen will begin serving a three year prison sentence in May as part of a plea deal he struck last year with prosecutors in New York.