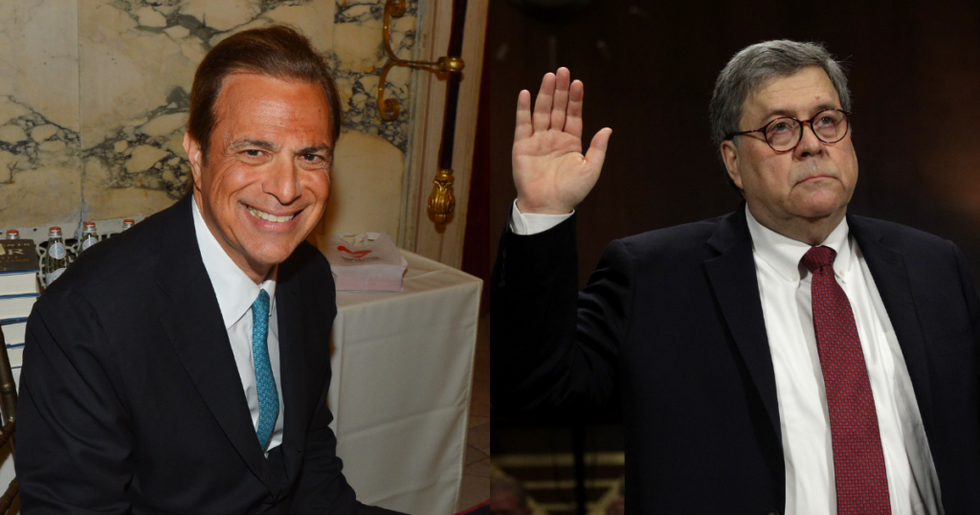 As the pressure mounts on Attorney General William Barr to account for his mishandling of Special Counsel Robert Mueller's report on Russian election tampering and obstruction of justice by President Donald Trump, presidential historian Michael Beschloss on Wednesday fired a warning shot at Barr.

In a tweet, Beschloss reminded Barr, and the world, what happened to John Mitchell, Richard Nixon's attorney general, at the apex of the Watergate scandal.

"Nixon’s Attorney General, John Mitchell, was convicted and went to prison for perjury, conspiracy and obstruction of justice," Beschloss tweeted.

Eleven months later, Mitchell was convicted on five counts and received sentences "from 20 months to five years on the conspiracy and obstruction counts, to run concurrently; to be followed by three concurrent terms of 10 months to three years for the three counts of lying under oath, for a total of 30 months as a minimum, after which Mr. Mitchell would be eligible for parole, and eight years as a maximum," the New York Times reported at the time.

Barr may face a similar fate. Democrats in Congress have begun demanding that Barr resign or face impeachment after a letter from Mueller to Barr was released on Tuesday.

In it, Mueller “expressed a frustration over the lack of context” in Barr's summary of Russian election interference, contacts between Russians and members of Trump's campaign, and Trump's efforts to sabotage the investigation.

Barr's four-page memo to Congress was fuzzy, Mueller wrote, because it downplayed the significance of the evidence Mueller collected, specifically on whether Trump obstructed justice.

"The summary letter the Department sent to Congress and released to the public late in the afternoon of March 24 did not fully capture the context, nature, and substance of this office’s work and conclusions,” Mueller said.

Barr took it upon himself to clear Trump of any wrongdoing, however, Mueller was clear in his report that Trump is not innocent and that he can and should face impeachment and/or criminal charges upon leaving office.

“If we had confidence after a thorough investigation of the facts that the president clearly did not commit obstruction of justice, we would so state,” Mueller wrote. “Based on the facts and the applicable legal standards, however, we are unable to reach that judgment.”

Instead, Barr made a surprising excuse for Trump. The president, he said, was upset about the investigation, and his alleged attempts to thwart the probe should be viewed as emotional and without criminal intent.

“There is substantial evidence to show that the president was frustrated and angered by a sincere belief that the investigation was undermining his presidency, propelled by his political opponents, and fueled by illegal leaks,” he said.

But the fact that Mueller had informed Barr of his misgivings about how the report was presented to the public conflicts with testimony Barr gave to the Senate last month.

Mueller's letter is proof that Barr was not being truthful, and Beschloss's hat tip to the past has struck a nerve.

People are demanding that the rule of law be upheld.

@BeschlossDC Thank you Mr. Beschloss for reminding us of history, when the rule of law was respected by both partie… https://t.co/zXgl4e52yL
— MrsLakey (@MrsLakey) 1556671660.0

Barr, facing additional grilling from Congress on Wednesday, maintains that there was "no underlying criminal conduct" by Trump because of Trump's belief the investigation was a ploy by his political enemies.

If your head is spinning, you are far from alone.

A live stream of the hearing is available here.