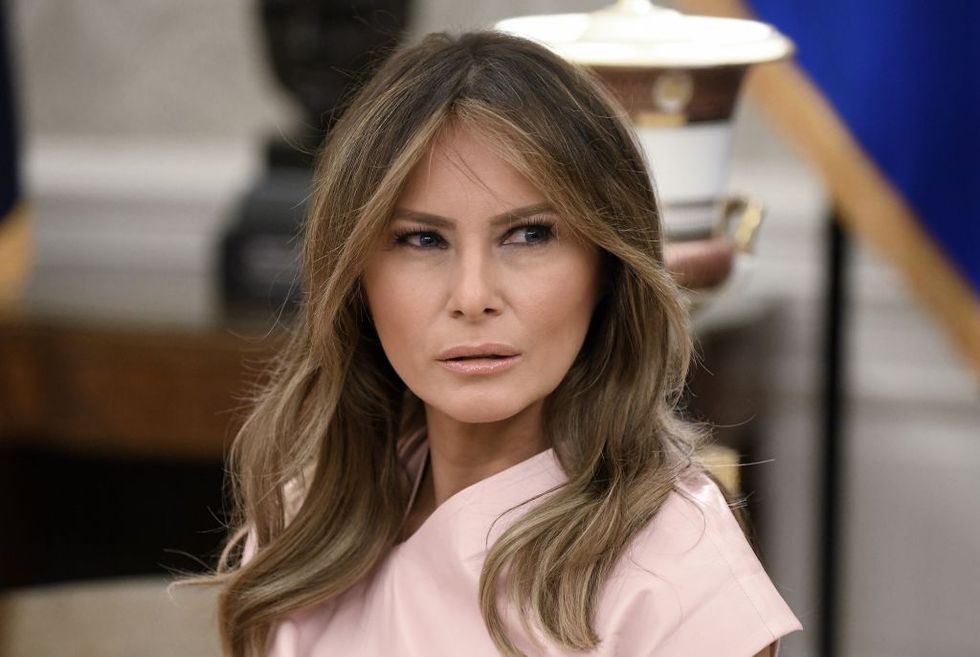 WASHINGTON, DC - JUNE 25: (AFP OUT) First lady Melania Trump attends a meeting with King Abdullah II and Queen Rania of Jordan in the Oval Office of the White House on June 25, 2018 in Washington, DC. (Photo by Olivier Douliery-Pool/Getty Images)

First Lady Melania Trump has an exclusive photo licensing deal with Getty Images for use in “positive stories only."

Mrs. Trump licensed 187 photos to Getty Images as part of a royalty deal reportedly earned between $100,000 and $1 million in royalties from Getty in 2017.

NEW: Getty Images paid Melania Trump a cut of the $$$ it made licensing photos of her taken before she was FLOTUS,… https://t.co/kBilBKn2Ed
— Christina Wilkie (@Christina Wilkie) 1530550551.0

NBC notes that, according to President Donald Trump's most recent financial disclosure, the First Lady "earned at least $100,000 from Getty Images for the use of any of a series of 187 photos of the first family shot between 2010 and 2016 by Belgian photographer Regine Mahaux."

While it's not unusual for celebrities to earn royalties from photos of themselves, the outlet observes, "it's very unusual for the wife of a currently serving elected official." Federal officials are only required to give an income range in their filings, and both Getty Images and the White House have declined to provide more specific figures. Both also declined to provide a list of where the images appeared.

The arrangement is not necessarily illegal. Getty did not disclose that royalties would be paid to the Trumps, and NBC News noted that most first ladies donate proceeds from book deals or similar arrangements to charity. However, the president's refusal to release his tax returns makes it impossible to know whether his wife followed suit.

NBC News found at least a dozen organizations that had paid to use Mahaux's restricted images of the Trumps in 2017, which meant the first family benefited from the deal indirectly.

Places where Mahaux's images have appeared include:

The news quickly opened up the First Lady to a slew of criticism.

1/3 This NBC News's report about Melania Trump and Getty Images is interesting, but it lacks a key point: Regine Ma… https://t.co/Y46mZvegB0
— olivierclaurent (@olivierclaurent) 1530555956.0

2/3 I wouldn't be surprised if Melania Trump shared the copyright for these images with the photographer, explainin… https://t.co/h3oomltRfP
— olivierclaurent (@olivierclaurent) 1530555956.0

I've long railed against Getty, often referring to them as GettyMart since they are, for all intents and purposes,… https://t.co/olWiGEiEiE
— Todd Bigelow Photo (@Todd Bigelow Photo) 1530551920.0

A White House spokesperson directed NBC News to the president's financial disclosure forms. Mahaux herself declined to answer questions from the outlet, only saying that "everything is legal."

NBC News found that other entities had used the images before the president took office, but no income from the Getty licensing deal is listed in financial disclosures prior to 2017. But Mahaux's images appeared in other rather prominent places:

In August 2016, Mahaux's portrait of then-candidate Trump and his wife was featured in the official Republican National Convention guide book that was given to each delegate. Campaign finance records show the money to pay for the guide came from political donations to the Republican National Committee.

The program was produced by Great Lakes Publishing, which said it got the image from a committee involved in arranging the convention. Jeff Larson, a political consultant who ran that committee, said, "We didn't pay any royalties that I know of for that photo."

NBC's Nightly News included the images in a Nightly News segment on Melania Trump that aired July 18, 2016, during the Republican National Convention.

The French edition of Vanity Fair put one of the pictures on the cover of its August 2016 issue.

Fox News used the photos in a variety of news segments in 2016. Greta Van Susteren's show "On the Record" included two portraits of Melania Trump during an interview Van Susteren did with the future first lady. In November 2016, after Trump's upset election win, the first episode of the Fox News show "OBJECTified," hosted by TMZ founder Harvey Levin, depicted the life and rise of Donald Trump. The episode included two of the images taken by Mahaux.

A Fox News Channel spokesperson said in a statement that the Mahaux photos used by Fox "were provided by the Trump campaign and Melania Trump's office, who told us they had full ownership and rights to the photos."

Several news organizations––including Yahoo News, The Houston Chronicle, The San Francisco Chronicle, and The San Antonio Express-News––have removed the images from their websites in response to NBC News's findings.

"We were not aware of this specific arrangement with Getty nor was our editorial influenced by it. We have removed the image from Yahoo Lifestyle," Yahoo said in a statement.