Donald Trump's Response to John McCain's Death Has Been Remarkably Petty, But Turns Out McCain Got In One Parting Shot 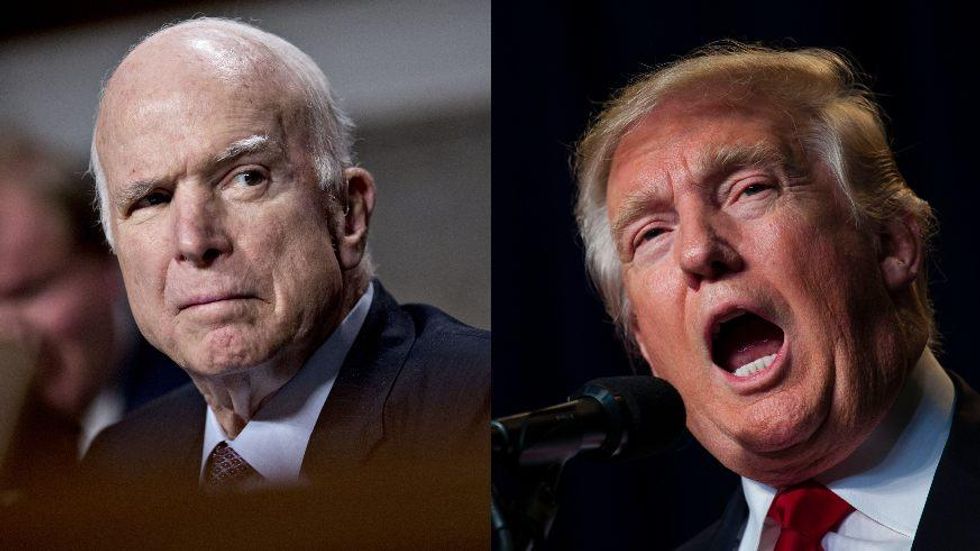 The late Senator John McCain (R-AZ) ordered that President Donald Trump not be invited to his funeral, and his family intends to respect his wishes, requesting former Presidents Barack Obama and George W. Bush to deliver eulogies. The senator, who died Saturday after his family announced he would cease treatment for glioblastoma, will lie in state in both the Arizona Capitol and the U.S. Capitol rotunda before the funeral service in Washington National Cathedral and burial in Annapolis, Maryland.

The news of McCain's final wishes comes after Trump reportedly vetoed an official White House statement which would have emphasized McCain's status as an American hero, lauding both his time in the military and his long tenure in Washington. The president shut this idea down, choosing to post a tweet instead. The tweet did not mention any of McCain's achievements and was widely criticized as insensitive. Trump had not acknowledged McCain's rapidly declining health prior to that tweet.

The White House has come under fire this morning now that the American flag is no longer at half-staff in honor of McCain. The flag-lowering, which lasted less than 48 hours, breaks from precedent that it is lowered until burial.

Flags at the White House were lowered to half staff this weekend for the passing of John McCain but this morning th… https://t.co/PTQY1kfEVp
— Karen Travers (@Karen Travers) 1535365223.0

Camera shot facing south over the White House - you can see the flag at the WH at full staff while the flags surrou… https://t.co/4uWjaTFD3y
— Karen Travers (@Karen Travers) 1535372008.0

The decision not to invite Trump to his own funeral is a significant parting shot from McCain, whose relationship with the president was often contentious.

As if that weren't enough, Monday afternoon saw the release of Senator McCain's "farewell statement" in which McCain took one final swipe at the president:

"Do not despair of our present difficulties but believe always in the promise and greatness of America."

The two men sparred from the moment Trump, then a presidential candidate, infamously said that McCain, a veteran of the armed forces who was a prisoner-of-war in Vietnam, was “not a war hero.”

“He was a war hero because he was captured. I like people who weren’t captured,” Trump said at the time. McCain, in response, mocked Trump’s multiple draft deferments, pointing to wealthy Americans who were able to get out of being drafted into service. McCain has been awarded the Silver Star, the Bronze Star, the Legion of Merit, a Purple Heart and the Distinguished Flying Cross for his military service.

As CNN points out:

Tributes for McCain and the lauding of his courage, honor, decency, character, and readiness to reexamine his own mistakes will unfold at a time when Trump is facing an unflattering public debate about his own personality and behavior. The guilty plea by the President's former personal lawyer Michael Cohen and conviction of former campaign chairman Paul Manafort last week deepened the political and legal storm raging around the White House -- but still did not push most Republican leaders to criticize Trump.

In that context, the ceremonies marking McCain's passing seem sure to become more than a lament for a departed political giant. They are likely to become a debate about political morality and the comportment and principles expected of public figures in an already polarized political age that has been further roiled by Trump's disruptive influence.

To many, the knowledge that McCain had effectively barred the president from his own funeral spoke volumes about the current, vehemently partisan battleground in Congress and the juxtaposition between a man who, starting from his days in military service, served his country honorably and another man who, considering the near-daily revelations from Special Counsel Robert Mueller's Russia investigation, could very well be remembered as a traitor to the republic could not be more clear.

Trump is going to do something deplorable to try to take attention away from John McCain’s funeral. Congrats @gop… https://t.co/1WGpJMcJir
— Roland Scahill (@Roland Scahill) 1535331610.0

The fact that John McCain asked for President Obama to give a eulogy at his funeral and for Donald Trump to not attend really says it all.
— Denizcan James (@Denizcan James) 1535247747.0

John McCain, while planning his own funeral, made sure that the sitting President of the United States wasn’t invit… https://t.co/Z2wd0cKFMr
— Mat Molina (@Mat Molina) 1535373203.0

In recent months, Trump had found other ways to spur McCain. A couple of weeks ago, Trump made headlines after he signed a $716 billion defense policy bill named for John McCain but included no mention in his remarks of the Republican senator.

No mention of John McCain by any of the speakers at Trump event to sign act named in honor of McCain. Trump omitt… https://t.co/Bj4RSbd2au
— Jennifer Jacobs (@Jennifer Jacobs) 1534188325.0

CNN later chose to pay tribute to McCain and his family.

“Today, McCain took the high road,” reporter Jake Tapper shared at the time, “and issued a statement saying, ‘I’m humbled that my colleagues in Congress chose to designate this bill in my name. Serving as chairman of the Senate Armed Services Committee and working on behalf of America’s brave service members has been one of the greatest honors of my life’. And since President Trump would not do it, let us here on THE LEAD congratulate Senator John McCain and his family and thank him for his service to the country.”

The White House also found itself engulfed in scandal in the spring when former White House aide Kelly Sadler made disparaging comments about McCain and his cancer diagnosis. Sadler made headlines after she said that Senator McCain’s opposition to Gina Haspel’s nomination for CIA director because “he’s dying anyway.”

The White House, through a spokesperson, did not dispute the remark. The official said, “We respect Senator McCain’s service to our nation, and he and his family are in our prayers during this difficult time.”

Another White House official said Sadler, who is in charge of surrogate communications, meant it as a joke, “but it fell flat.”

Arizona Governor Doug Ducey is working to find McCain's replacement for his vacant Senate seat. Whoever he selects will remain in the seat until the state holds a special election in November 2020. The winner of that election will hold that seat until November 2022.

“We’re most proud to call him a fellow Arizonan," Ducey said in a statement following McCain's death. “Like so many of us, he was not born here, but his spirit, service and fierce independence shaped the state with which he became synonymous.”

This piece has been updated from its original version to reflect the release of Senator McCain's farewell statement.