Lindsey Graham Is Trying Really Hard to Make the William Barr Hearing About Hillary Clinton's E-Mails, Because Of Course He Is 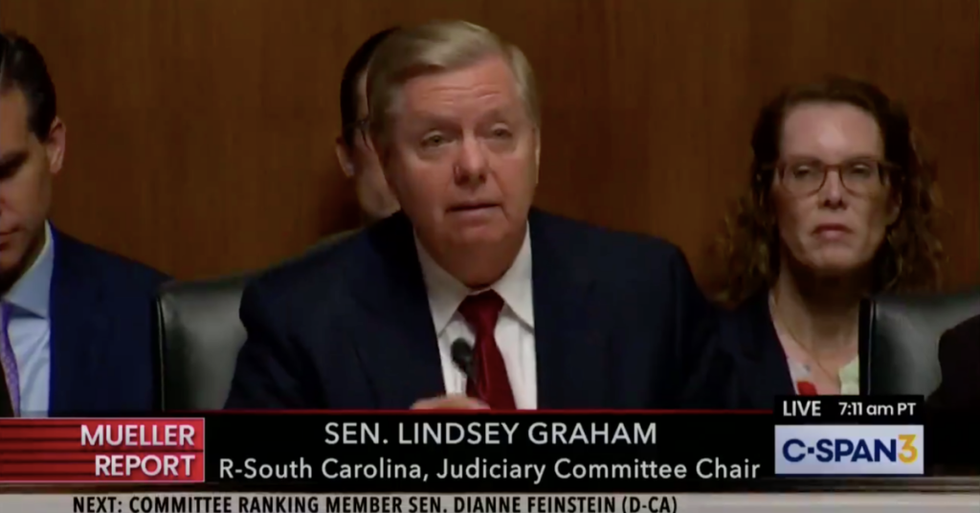 Senator Lindsey Graham (R-S.C.) invoked Hillary Clinton's email controversy during Attorney General William Barr's Senate Judiciary Committee hearing. The moment was an odd one, considering the FBI settled the matter several years ago: Clinton was never prosecuted and Department of Justice’s Office of the Inspector General’s report found no evidence of political bias and supported the FBI and DOJ’s decision not to prosecute her.

But Graham brought Clinton up nevertheless.

"The other campaign was investigated not by Mr. [Robert] Mueller, by people within the Department of Justice," he said. "The accusation against Clinton, Secretary Clinton, was that she set a private server up somewhere in her house and classified information was on it to avoid the disclosure requirements and the transparency requirements required as Secretary of State. So that was investigated."

Graham also alleged that Clinton's team had taken great lengths to dispose of evidence that could implicate her in any wrongdoing, bringing up the BleachBit and hammer-smashing conspiracy theories commonly invoked by Clinton's hard-right critics:

“There was a protective order for the server issued by the House and there was a request by the State Department to preserve all the information on the server. Paul Combetta, after having the protective order, used a software program called BleachBit to wipe this email server clean . . . Eighteen devices possessed by Secretary Clinton she used to do business as secretary. How many of them were turned over to the F.B.I.? None. Two of them could be turned over because Judith Casper took a hammer and destroyed two of them. What happened to her? Nothing.”

None of this had anything to do with Barr's hearing this morning to discuss Special Counsel Robert Mueller’s report about Russian interference, and Graham was harshly criticized for once again casting attention on a case now long closed.

.@LindseyGrahamSC is now going on about the Clinton email case. Not a word about Trump and his gang aiding and abet… https://t.co/wHXypUliWp
— David Corn (@David Corn) 1556720137.0

4) Back to Lindsey Graham. Now he's lying about Hillary Clinton's emails. Is there a trap door under this guy? Because fuck him.
— Palmer Report (@Palmer Report) 1556719977.0

It has now been nearly 30 months since the election and Lindsey Graham is talking about Hillary Clinton's emails. W… https://t.co/gaGEgoaQM5
— Erick Fernandez (@Erick Fernandez) 1556720140.0

Earlier during the hearing, Graham admitted to not having read the entire Mueller report.

"I can't say I've read it all, but I've read most of it," he said, holding up a copy of the redacted report.

Despite not having read the complete Mueller report, Graham seems rather certain that President Donald Trump did not obstruct justice. Earlier this week, Graham, who chairs the Senate Judiciary Committee, said during an appearance on CBS’s “Face the Nation” that he doesn’t care if Trump told former White House counsel Don McGahn to fire the special counsel, insisting he did not obstruct the investigation.

“I don’t care what they talked about. He didn’t do anything. The point is the president did not impede Mueller from doing his investigation,” Graham said. “I don’t care what happened between him and Don McGahn. Here’s what I care about: Was Mueller allowed to do his job? And the answer is yes.”

The special counsel in his report examined several attempts Trump made to obstruct the probe, concluding that he failed, in large part because many in his orbit refused to comply with his orders.

Senator Dianne Feinstein (D-CA) the House Judiciary Committee’s highest-ranking Democrat, says she intends to inquire about the disconnect between Barr’s summary and Mueller’s findings, particularly now that the fact that Mueller pushed Barr twice to release more of his report’s investigative findings, saying Barr’s initial summary “did not fully capture the context, nature, and substance of this Office’s work and conclusions," has become public knowledge.

“Contrary to the declarations of the total and complete exoneration,” Feinstein said, “the special counsel’s report contained substantial evidence of misconduct.”