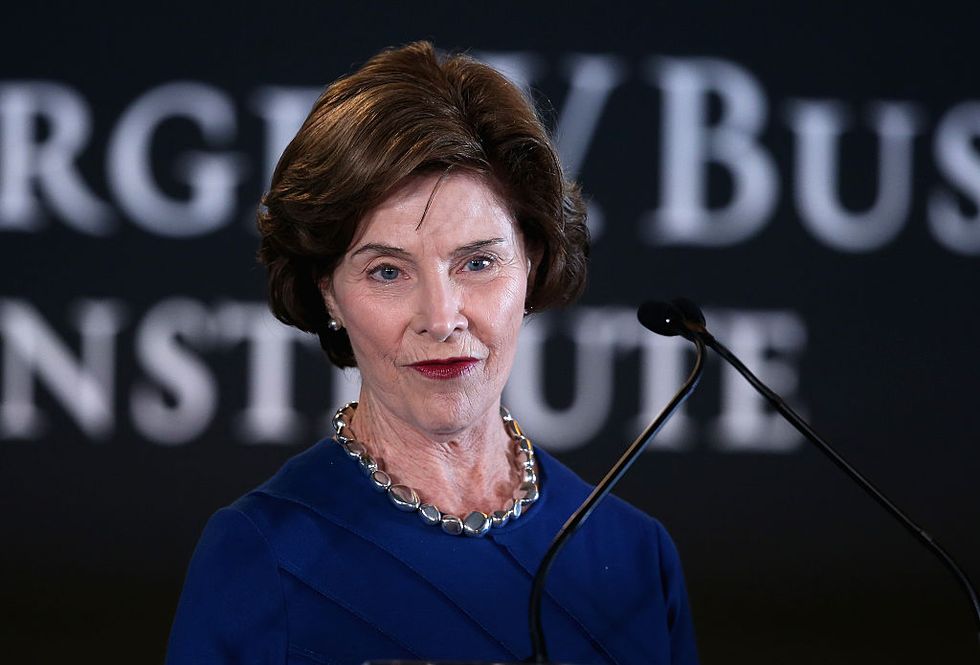 ORLANDO, FL - MAY 08: Laura Bush talks at a Symposium of Invisable Wounds at the Shades of Green resort at Invictus Games Orlando 2016 at ESPN Wide World of Sports on May 8, 2016 in Orlando, Florida. (Photo by Chris Jackson/Getty Images for Invictus Games)

"I live in a border state. I appreciate the need to enforce and protect our international boundaries, but this zero-tolerance policy is cruel. It is immoral. And it breaks my heart," Bush wrote.

Bush compared the separations to the internment of Japanese Americans in World War II, which resulted in the detainment of between 110,000 and 120,000 people of Japanese ancestry:

Our government should not be in the business of warehousing children in converted box stores or making plans to place them in tent cities in the desert outside of El Paso. These images are eerily reminiscent of the Japanese American internment camps of World War II, now considered to have been one of the most shameful episodes in U.S. history. We also know that this treatment inflicts trauma; interned Japanese have been two times as likely to suffer cardiovascular disease or die prematurely than those who were not interned.

The former First Lady observed that the moral character of the United States is at stake, saying "the injustice of zero tolerance is not the answer":

People on all sides agree that our immigration system isn’t working, but the injustice of zero tolerance is not the answer. I moved away from Washington almost a decade ago, but I know there are good people at all levels of government who can do better to fix this.

Bush then cited a report from Colleen Kraft, who heads the American Academy of Pediatrics. Kraft visited a shelter run by the U.S. Office of Refugee Resettlement.

"She reported that while there were beds, toys, crayons, a playground and diaper changes, the people working at the shelter had been instructed not to pick up or touch the children to comfort them," Bush wrote. "Imagine not being able to pick up a child who is not yet out of diapers."

Bush closes her op-ed with a tribute to her mother-in-law, former First Lady Barbara Bush, who died in April at the age of 92. Barbara Bush was able to use her platform to address topical issues like homelessness, AIDS, and teen pregnancy. She also sparked headlines when, during a visit to Grandma's House, a home for children with HIV/AIDS in Washington, she picked up and cradled a dying baby.

As Laura Bush points out:

Back then, at the height of the HIV/AIDS crisis, the disease was a death sentence, and most babies born with it were considered “untouchables.” During her visit, Barbara — who was the first lady at the time — picked up a fussy, dying baby named Donovan and snuggled him against her shoulder to soothe him. My mother-in-law never viewed her embrace of that fragile child as courageous. She simply saw it as the right thing to do in a world that can be arbitrary, unkind and even cruel. She, who after the death of her 3-year-old daughter knew what it was to lose a child, believed that every child is deserving of human kindness, compassion and love.

Bush's clear call for a more compassionate response to the migrant crisis follows much obfuscation from the Trump administration.

Although the Department of Homeland Security announced last week that around 2,000 children have been separated from their families during the six weeks since the policy went into effect, the Homeland Security Secretary has contradicted her agency's own report.

In a tweet last night, Homeland Security Secretary Kirstjen Nielsen claimed that the administration "does not have a policy of separating families at the border."

“It was a simple decision by the administration to have a zero tolerance policy for illegal entry,” he told The New York Times. "Period."

Presidential counselor Kellyanne Conway also defended the policy during an appearance on NBC’s “Meet the Press.” Conway insisted that "nobody" in the administration likes to enforce the zero-tolerance policy.

“Nobody likes seeing babies ripped from their mothers’ arms,” she said. “As a mother, as a Catholic, as somebody who has got a conscience... I will tell you that nobody likes this policy.”