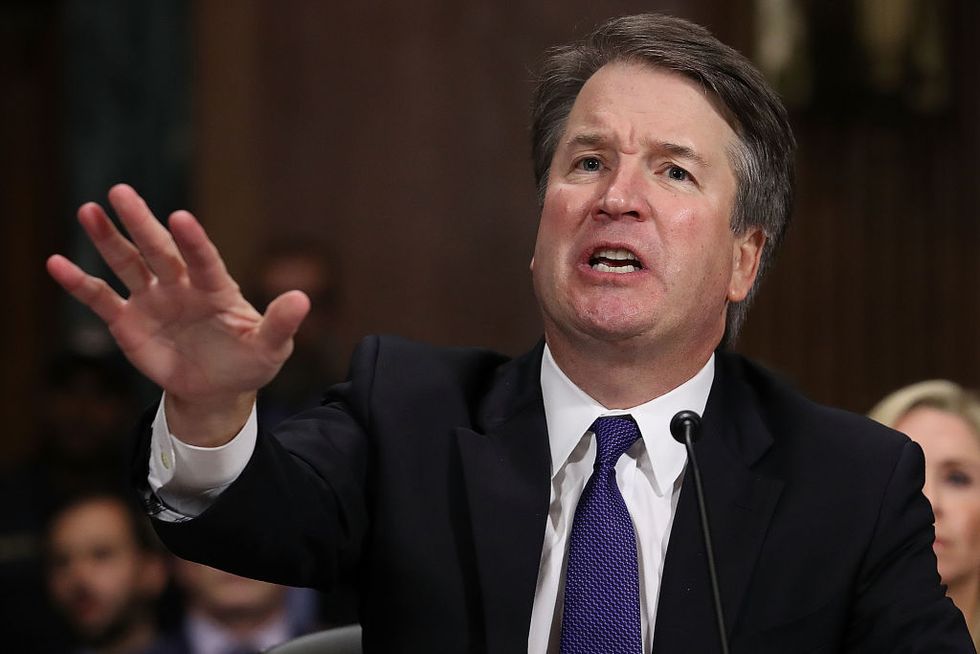 “Kevin Jackson has been terminated as a contributor,” a Fox spokesperson said in a statement. “His comments on today’s hearings were reprehensible and do not reflect the values of FOX News.”

A Fox News spokesperson just let me know that Kevin Jackson "has been terminated as a contributor," adding that "hi… https://t.co/eWuO47UPRN
— Justin Baragona (@Justin Baragona) 1538086469.0

Jackson was tweeting during the Senate Judiciary Committee hearing in which Dr. Ford testified that Kavanaugh sexually assaulted her when they were both in high school. Ford recalled Kavanaugh held her down and grinded his body against her as he tried to remove her bathing suit.

Jackson responded to Dr. Ford's testimony with several sexually demeaning tweets which predominantly attacked her appearance, at one point describing her as "rode hard and put up wet."

Wow, #ChristineFord looks rode hard and put up wet, as we say in the country. Just peeked into this FARCE. #ConfirmKavanaughNow #TeamKJ
— Kevin Jackson (@Kevin Jackson) 1538057718.0

At one point, he claimed that the FBI should investigate "SEX PARTIES" at Dr. Ford's residence:

In a now-deleted tweet, Jackson said of Dr. Ford: "Dang girl, stop opening your legs and OPEN A BOOK!"

But it was his tweets referring to Dr. Ford, Deborah Ramirez, and Julie Swetnick––the three women who have accused Kavanaugh of assault––as "Lying skanks" that prompted the strongest reaction.

I disagree. Feminists are their own worst enemies, and enemy of women. Also, they want men to NEVER be believed. I… https://t.co/vZdv5YUAWc
— Kevin Jackson (@Kevin Jackson) 1538059039.0

Jackson described "leftist women" as "skanky for the most part."

It wasn't challenged, because Leftist women are skanky for the most part. More will be sued and made to pay for t… https://t.co/kF9OrwivV9
— Kevin Jackson (@Kevin Jackson) 1538059137.0

News of the firing spread fast.

Fox News has been embroiled in sexual harassment and assault scandals before. The company's late CEO Roger Ailes and former anchor, Bill O'Reilly, exited the network after accusations against them. Both men denied the allegations.

Although Fox has since moved more women into significant leadership positions––for example, the chief executive officer, chief financial officer, ad sales chief and public relations head are all women––the network has been accused of condoning and perpetrating the exact behavior which compels survivors of sexual assault to remain silent.

Earlier this week, Fox News anchor Tucker Carlson said in a segment with liberal radio host Ethan Bearman that Dr. Ford bears the responsibility of not protecting the other women from sexual assault.

"Sex offenders tend to commit serial sex crimes. Doesn't she have an obligation to tell someone to stop him from doing it if he is a fact a sex criminal? Where's her obligation here? What about the rest of us?" he asked.

He continued: “And I know it’s hard, but why don’t we have a right to know? If there’s a rapist on the loose, if you don’t tell anybody … if Bernie Madoff rips you off and you don’t tell his other investors … you’re part of the problem, are you not?”

of “not being a true victim.”

“I don’t want to cast any doubt on her allegations,” Watters told co-host Greg Gutfeld, “but the way they are dragging this out now it’s become so political, Greg, that it’s gotten away from the actual alleged crime. And now it’s about the process and the nomination of this guy. She’s not doing things– the Democrats aren’t doing things in a way that people would do if she was a true victim.”

If you go out and you say the first thing, you hear Kavanaugh’s name, you call The Washington Post and then you call your congresswoman and then you call Dianne Feinstein and you say you don’t want to come forward because you want to be anonymous but at the same time you take a polygraph test, and when they ask you how did you pay for the polygraph, you don’t say how you paid for it… It’s just way, way too suspicious to what’s going on. I wanted to believe her. I still kind of believe she believes something happened but it doesn’t sit right.”

Although Watters joins the chorus of Republicans, particularly Senate Majority Leader Mitch McConnell, who’ve criticized the way Democrats have handled the allegations, many have pointed out that Dr. Ford did not, from the outset, want her name to become public knowledge.

In truth, Ford had sent a letter to Feinstein and anonymously tipped off the Washington Post back in July, but had requested that her identity remain a secret, citing fears of what publicity might mean for her and her family amid the task of having to rehash the assault in the public eye. Feinstein chose to honor Ford’s request for anonymity. Ford only came forward after The Intercept reported that Feinstein had a letter describing an incident involving Kavanaugh and a woman while they were in high school in her possession and was refusing to share it with her colleagues.