Does she know what their job is? 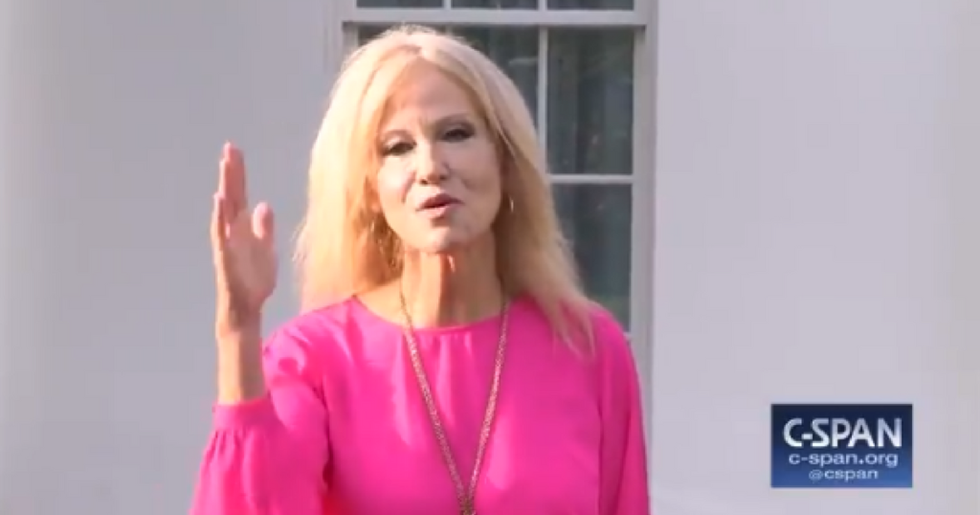 White House Senior Advisor Kellyanne Conway asked the White House Press Corps a perplexing question on Friday as she made her way into work, and it's a doozy.

Conway wanted to know why reporters are "so obsessed" with President Donald Trump, saying she thinks it's "kind of weird" that the public is always "mentioning his name."

"Why is everybody so obsessed with the President of the United States that they can't even begin or finish a sentence without mentioning his name five times," Conway wondered, unironically. "It's kind of weird."

Kellyanne Conway: "Why is everybody so obsessed with the President of the United States that they can't even begin… https://t.co/cUOukycZx6
— CSPAN (@CSPAN) 1534510321.0

After being asked why former CIA Director John Brennan had his security clearance revoked, Conway added that this "obsession" with Trump is "infecting people on the news" who "fancy themselves experts on national security."

The bizarre exchange was preceded by a string of comments from Conway defending the $716 billion defense budget Trump signed into law earlier this week. Conway said Trump is the "most pro-military, pro-veteran president" ever, emphasizing that the budget gives servicemembers the "resources and respect they need."

Conway then accused those who disagree with the handling of America's wars of "disrespecting the flag" and "yelling at our brave men and women in uniform as they walk by."

Philip Bump of the Washington Post responded on Twitter with a perfect analogy to Conway's question about the media's so-called "obsession."

"Standing outside the Super Bowl, the NFL spokesman asks sports reporters why they keep wanting to talk about football," Bump wrote.

Twitter added some of its own thoughts to Bump's comparison.

The media "just want to confirm that the stupidity they heard was what Trump said."

@pbump @crampell They keep talking about him because he is the President and says the stupidest things. They just w… https://t.co/RYk3Po4ybB
— Henry M. Rosenberg (@Henry M. Rosenberg) 1534513027.0

"What a bizarre thing to say." No kidding.

"When spotted striding out of a burning building, Kellyanne asks why everyone is so obsessed with fire safety, arson, and fire trucks. 'What about Infrastructure Week? That’s going on too,' she commented."

@pbump When spotted striding out of a burning building, Kellyanne asks why everyone is so obsessed with fire safety… https://t.co/NJb9Du30gM
— Amanda Stevens (@Amanda Stevens) 1534515209.0

Responses to the C-SPAN clip were brutal.

It's well-known Conway is a fan of invoking "what about Obama" when pressed on Trump.

@cspan Fascinating quote coming from the woman who has dropped the words “what about Obama” into nearly every single sentence since 2015.
— Joe Palmer (@Joe Palmer) 1534510406.0

The biggest eye roll. No one rolls eyes like this.

There is, of course, a very simple answer to Conway's question. It's the job of the White House Press Corps to inquire about the president.