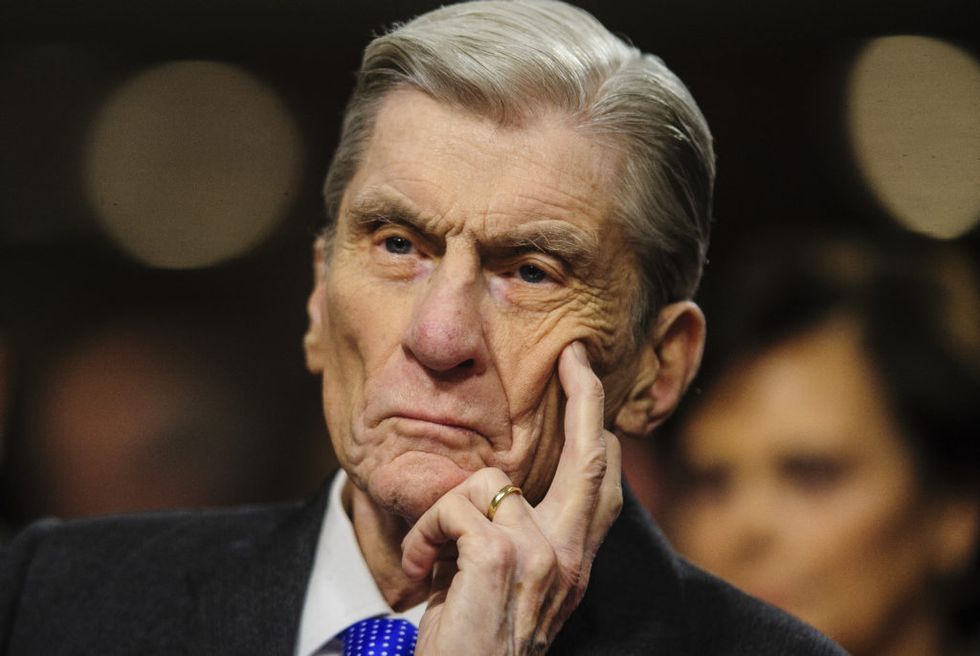 Republicans may be urging liberals to #WalkAway from the Democratic party before midterms, but former Republican Senator John Warner thinks it's Republicans who should be turning that advice toward themselves.

During his 30 years as Senator from Virginia, Warner was staunchly Republican. He favored a ban on same sex marriage. He was a friend of corporations and not of the environment.

He also just endorsed Virginia Democrat Abigail Spanberger in her race against Republican incumbent Dave Brat to represent Virginia's 7th District in the House of Representatives.

In a statement, Warner praised the former intelligence agent's character:

"She brings a strong understanding of the complex world beyond our nation’s shores and how that impacts the economy and jobs right here in central Virginia. Abigail has spent her career serving on the front-line to keep our country safe. If elected as a member of Congress, she needs no 'on the job training' in how to defend our fellow citizens and strengthen our economy and our national security."

Spanberger isn't the only Democrat endorsed by Warner, who also lent his voice to Democrat Leslie Cockburn in her race for the 5th district, as well as Democratic Senator Tim Kaine.

Warner said of the endorsements:

"It goes beyond politics now. I’m a Republican, I’ll finish a Republican as I cruise through my 91st year. But you’ve got to put the nation’s interests and the state’s interests ahead of politics."

@patrickmwilson @RTDNEWS John Warner is conservative, but he is old-school Republican - which is sorely missed thes… https://t.co/sGhlRcPhCz
— Annie (@Annie) 1541176962.0

@kylegriffin1 The @GOP should listed to this good piece of advice, before there’s nobody left voting for them.
— Michelangelo (@Michelangelo) 1541070139.0

What's more, Warner's words have compelled many to share their stories as well.

Many former Republicans came forward with the moment they or those in their lives knew it was time to walk away.

It appears that Warner's decision was mostly informed by the chaos of the Trump administration, which the Republican party has widely embraced. In addition to saying that the president had "no moral compass" and accused him of putting a "tremendous divide in this country," Warner also said:

"It’s a very serious time for the country. I did not support Trump. I’m deeply troubled by the central issues. So much of my life has been devoted to the intelligence work and national security — and I’m just not comfortable with the way he’s handling these national security issues."

It's unclear whether or not Warner's backing will give Democratic Virginians an edge ahead of the midterms, but it does paint a picture of the ways in which Republicans can respond to the current administration.