Joe Biden Just Explained What's At Stake After Anthony Kennedy's Retirement, and His Warning Is Dire

We should all listen. 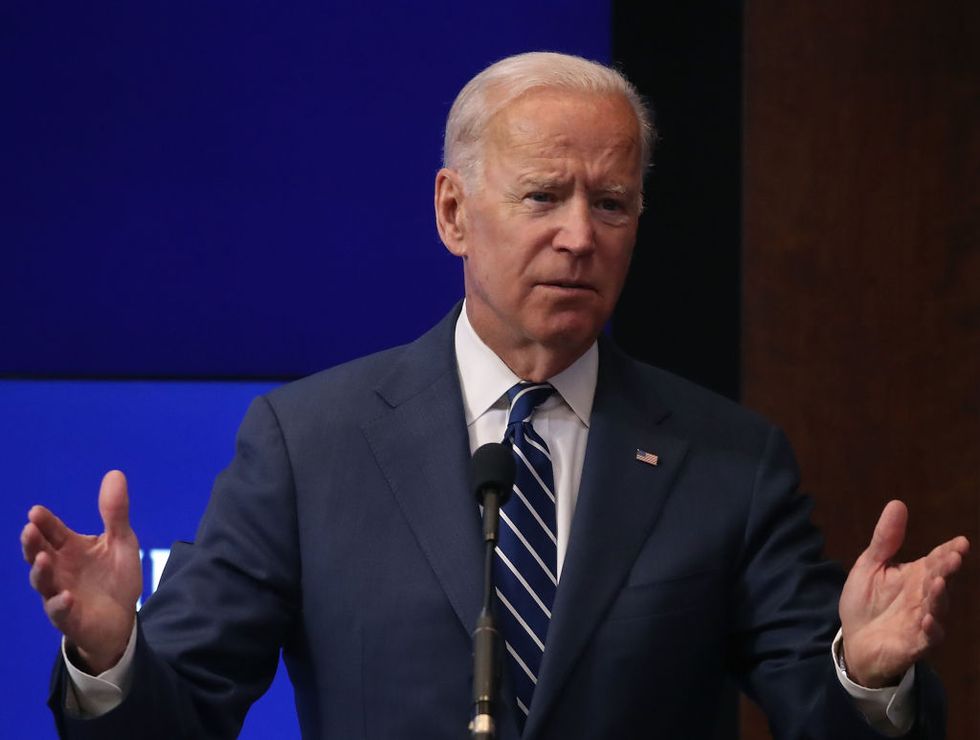 WASHINGTON, DC - MAY 08: Former U.S. Vice President Joe Biden delivers a keynote address regarding the future of the middle class, at the Brookings Institution, on May 8, 2018 in Washington, DC. (Photo by Mark Wilson/Getty Images)

"I said a year ago we’re living through a battle for the soul of this nation," wrote former Vice President Joe Biden as he sounded the alarm for Democrats and progressives to band together and vote in the midterm elections this November.

Biden's message comes just a day after Justice Anthony Kennedy’s sudden announcement that he will retire from the Supreme Court. Many conservatives around the nation have applauded Kennedy's announcement, viewing it as an opportunity for President Donald Trump to codify his legislative agenda.

Biden warned his followers that landmark Supreme Court decisions in the battle for the right to choose (Roe v. Wade) and marriage equality (Obergefell v. Hodges) are in grave danger of being overturned. He also lamented that the president's disinterest in choosing a "consensus candidate" over a hardline conservative who could have the ability to rubber-stamp his proposals.

I wish this President would engage in conversations and nominate a consensus candidate. That’s what we’ve done in t… https://t.co/WDOIF2zWgj
— Joe Biden (@Joe Biden) 1530200880.0

I wish this Senate would force a consensus choice—as we did with Justice Kennedy—it no longer has the will.
— Joe Biden (@Joe Biden) 1530200880.0

Biden opined that hearings or a confirmation for the next Supreme Court justice should not happen before the midterm elections. His suggestion follows a precedent set by Senate Majority Leader Mitch McConnell (R-KY), who infamously refused to hold hearings for Merrick Garland, former President Barack Obama's nomination for the high court.

Biden ended with a call for Americans to show up and vote in droves this November.

Biden is the early favorite to represent the Democrats and try to unseat President Trump in the 2020 election, according to a Harvard CAPS/Harris June poll which found he was the choice of 32 percent of Democrats.

In recent weeks, Biden, one of the Trump administration's most vocal critics, has condemned its "zero tolerance" family separations policy, which kickstarted a humanitarian crisis at our nation's southern border. He has also encouraged Americans to "fight back" against the Justice Department's proposal to gut the healthcare system further by ending protections for pre-existing conditions and called out the president for courting Vladimir Putin despite the common knowledge that Russian operatives interfered in the 2016 presidential election cycle, a fact which has subjected the president and many of his associates under intensive federal investigation.

A policy that separates young children from their parents isn’t a “deterrent”. It’s unconscionable. A policy that… https://t.co/IjWCFZoxRq
— Joe Biden (@Joe Biden) 1529511905.0

Biden's fears over seating a hardline conservative on the bench are not unfounded one: Several legal analysts and political commentators predict that President Trump's pick is likely to be young and staunchly conservative; his appointment of Neil Gorsuch to the bench last year stoked fears that the Court would be subject to a more partisan bent.

Speaking mere hours after Justice Kennedy announced his retirement, Jeffrey Toobin, a staff writer for The New Yorker and CNN’s Senior Legal Analyst, predicted abortion will be illegal in almost half of the country within 18 months.

Responses to Toobin’s tweet were rife with alarm with some likening the death knell of abortion rights to the rise of a society as depicted in Margaret Atwood’s The Handmaid’s Tale, in which women are forced to bear children against their will. Others pointed out that banning abortion would not necessarily get rid of abortion––it would only make the procedure less safe, as history has shown us.

Tobin did elaborate further during an appearance on CNN’s “The Lead with Jake Tapper,” where he was joined by other legal analysts with some observations of their own.

“Any Supreme Court nomination is important, but this one is the most important because it will change the partisan makeup of the court,” he told Jake Tapper. “Anthony Kennedy… was mostly with the conservatives, while on a couple of key issues, most notably abortion rights, he was the vote that was keeping Roe v. Wade the law of the land. That is done. Roe v. Wade is going to be overturned. There is no doubt that the people advising President Bush-uh, President Trump, in making this nomination is to pick someone who will vote to overturn Roe v. Wade.”

The states, Toobin continued, “know this”:

They will start passing right now bills banning abortion altogether, and I guarantee you in the next year, the Supreme Court will have cases that will challenge Roe v. Wade, and I think it is doomed. Abortion will be illegal in a significant chunk of this country within 18 months.

Both President Trump and Senator McConnell have assured their supporters that a new Supreme Court justice should be confirmed by the fall. In response, the pressure has mounted on Republican senators like Susan Collins (ME) and Lisa Murkowski (AK), who have expressed their support for women's reproductive rights, to not confirm a Supreme Court nominee who plans to overturn Roe v. Wade. Collins, in particular, has referred to Roe v. Wade as "settled law."