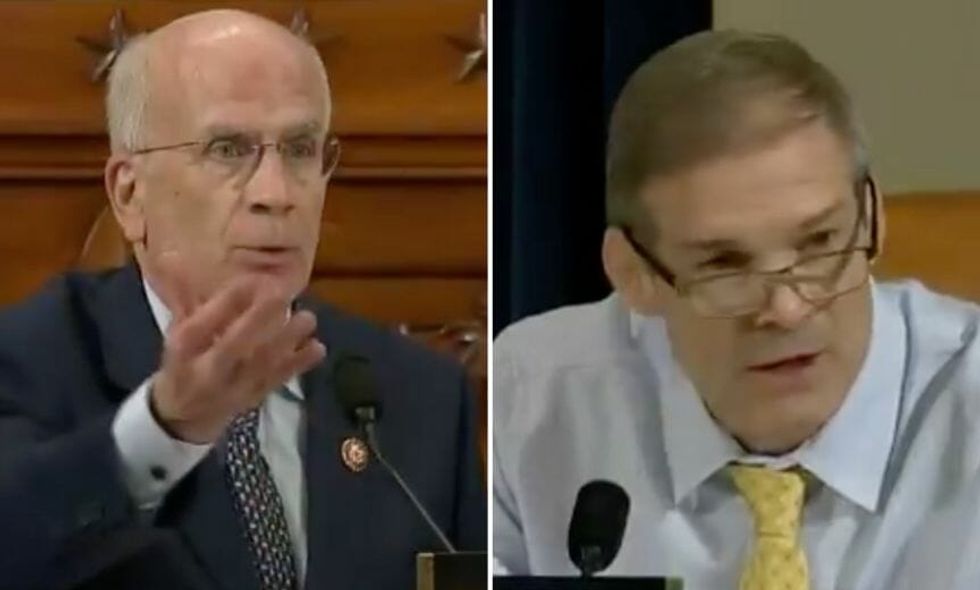 Republicans on the House Intelligence Committee overseeing the first public hearings in the impeachment inquiry against President Donald Trump were scrambling to discredit the effort all together.

Chief among them was Congressman Jim Jordan (R-OH), who was recently added to the Intelligence Committee for his reputation as a Republican attack dog.

Attack, Jordan did. Toward the end of the testimony, Jordan called for the whistleblower, whose complaint spurred the inquiry, to testify, characterizing the whistleblower as "the person that started it all."

Welch pointed out that the anonymous whistleblower didn't start it all, but Trump did by pressuring Ukrainian President Volodymyr Zelensky to investigate his potential 2020 opponent, former Vice President Joe Biden.

"I'd be glad to have the person who started it all to come in and testify. President Trump is welcome to take a seat right there."

The quip drew laughter from the entire room.

Jim Jordan said we should hear from the person who started it all. I agree. @realdonaldtrump, you’re welcome an… https://t.co/ritNTfLVOU
— Rep. Peter Welch (@Rep. Peter Welch) 1573677457.0

While the response may have seemed jocular, the idea behind it was completely valid.

@BuzzFeedNews That crack by Jordan REALLY blew up in his face thanks to Rep. Welch. Jordan earned it & deserved it.… https://t.co/mQweZzUQvB
— Goldensrule (@Goldensrule) 1573676495.0

Ooooh Peter Welch with the Gym Jordan clap back, pointing out that Trump is free to come testify before Congress hi… https://t.co/fYgDUnROYo
— Fiddler (@Fiddler) 1573675873.0

While Democrats largely stuck to the threats Trump's pressure on the Ukrainian President posed to national security and rule of law, Republicans stuck to Jordan's line of defense: Biden is the real criminal, there was no quid pro quo, and the whistleblower isn't credible.

We'll see if that works.