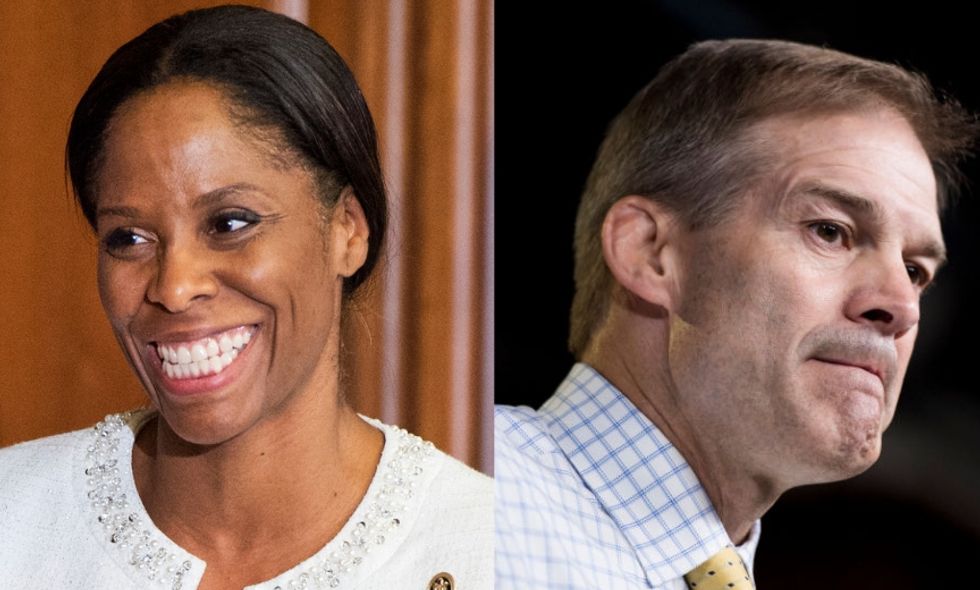 Cohen, Donald Trump's former lawyer, testified in front of the House Oversight Committee that Trump is a racist, a con man, and a cheat, confirming with documents that he was reimbursed for hush payments made to adult film actress Stormy Daniels to conceal an alleged 2006 affair with Trump ahead of the 2016 election.

Republicans on the Oversight committee fell in line to defend Trump by going to extraordinary lengths in assailing Cohen's credibility.

Rep. Stacey Plaskett (D-VI) was having none of it. The Congresswoman gave Rep. Jim Jordan (R-OH) an epic eye roll as he railed against Cohen, and the internet lost its collective mind.

Congressman Jordan embarked on an angry rant about Cohen and then yielded the floor - interrupting moments later to complain that he hadn't been given a copy of Cohen's testimony in advance.

Plaskett looked back while Jordan was pitching his fit and mouthed "Be quiet," turning around with a roll her eyes.

The internet related so hard.

Stacey Plaskett is all of us looking at Jim Jordan, the last person who should address anyone’s character https://t.co/z2fKUVHwYa
— Jemele Hill (@Jemele Hill) 1551284555.0

Y’all should know @StaceyPlaskett is one of the dopest members of Congress.
— Bakari Sellers (@Bakari Sellers) 1551295808.0

Congresswoman Plaskett wasn't pulling any punches. After Republican Congressman Chip Roy complained that the hearing was a waste of time and that he had "more important things to do," Plaskett shot back in her own questioning:

"I’ve got a lot to do as well. I've got houses and schools to help rebuild in the Virgin Islands, expansion of voting rights, educational opportunities, criminal justice reform. Thank God the Democratic majority can walk and chew gum at the same time."

Rep. Plaskett also called out members of congress for witness tampering, citing the intimidating tweet sent by Congressman Matt Gaetz in which he seemingly threatened Cohen.

I don't ever want to get on Stacey Plaskett's bad side - but that eye roll is the best thing we've seen at this hearing.