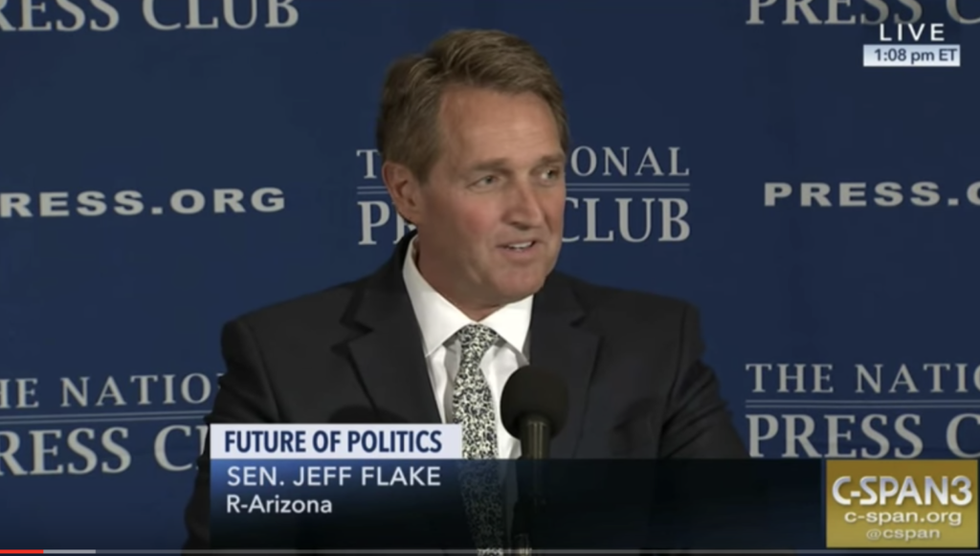 On Thursday, Senator Jeff Flake spoke at the National Press Club and opened up about the Republican Party in the age of Donald Trump.

"If we are going to cloister ourselves in the alternative truth of an erratic leader, if we are going to refuse to live in a world that everyone else lives in ... then my party might not deserve to lead."

He railed against Trump, saying:

"If one voice can do such profound damage to our values and to our civic life, then one voice can also repair the damage, one voice can call us to a higher idea of America, one voice can act as a beacon to help us find ourselves once again after this terrible fever breaks -- and it will break."

Flake announced his retirement from the Senate last year and recently called for a Republican challenger to Trump for the presidency in 2020 and he told Jake Tapper that he had not ruled out running himself, even heading to New Hampshire on Friday.

But these new remarks would seem to indicate he believes a Democrat should win in 2020 to give his party a wake-up call.

As he told Tapper, the Republican Party needs to be reminded of:

Jeff Flake has been unsparing today on Trump and his party, speaking at the National Press Club. “We should know by… https://t.co/UnVKiLewhC
— Manu Raju (@Manu Raju) 1521135654.0