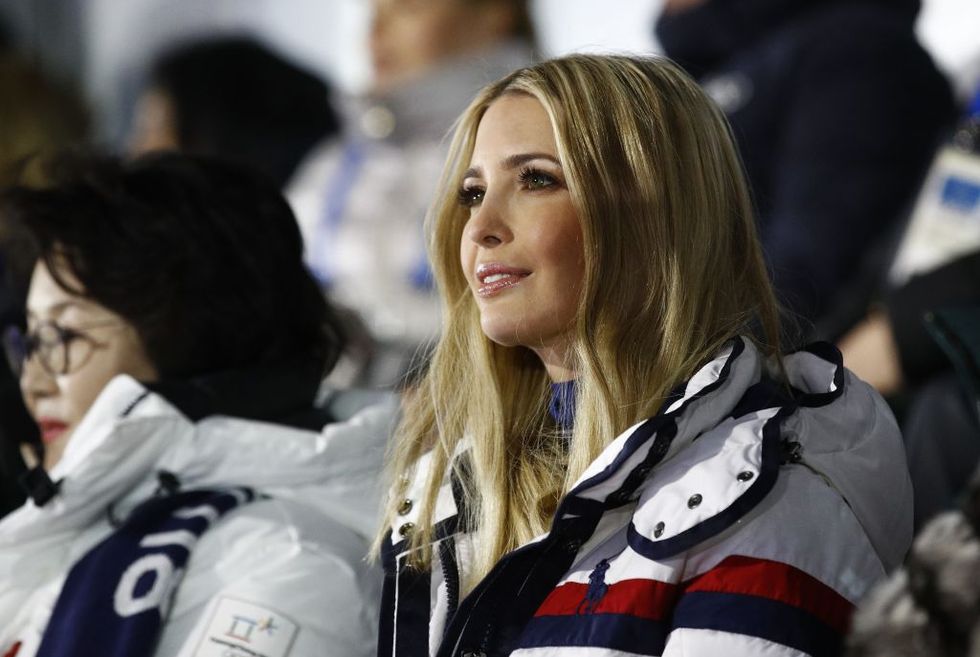 Ivanka Trump said arming teachers is "an option that needs to be discussed" during a new interview with NBC News yesterday.

"Obviously, there would have to be an incredibly high standard for who would be able to bear arms in our school," said Trump, who is the president's daughter and senior adviser, said during the interview which aired during her trip to the closing ceremonies at the 2018 Winter Olympics. "But I think that there is no one solution to creating safety."

Though she did not fully advocate for arming teachers, Trump did not break from her father or his proposal. She said:

"I think that having a teacher who is armed, who cares deeply about her students or his students and who is capable and qualified to bear arms is not a bad idea, but it is an idea that needs to be discussed."

She was immediately met with criticism. Many accused her of not paying attention to the national dialogue.

So, @IvankaTrump says the issue of arming teachers "should be discussed." Ivanka, while you were grabbing an Olymp… https://t.co/Zx7jZ9EYQI
— John Pavlovitz (@John Pavlovitz) 1519616218.0

Ivanka Trump's remarks came after President Donald Trump advocated for arming certain teachers in preparation for a possible mass shooting like the one that occurred on Valentine's Day at Marjory Stoneman Douglas High School in Parkland, Florida, which resulted in the deaths of 17 people.

Many educators have harshly rebuked the proposal, most notably survivors of the Parkland shooting. Sarah Lerner, a teacher at Marjory Stoneman Douglas, weighed in during an appearance on CNN last week.

“I have no desire to own a gun, carry a gun, shoot a gun, touch a gun. I don’t think that my coming to school with a gun would have changed anything. I’m in Building 6, not Building 12, so if I had been on campus with a gun, there would have literally been nothing for me to do,” she said.

When asked if she would have felt safer if she had had a gun, Lerner replied: “No, no, because I don’t need to have a gun to keep me safe. I knew that the SWAT team, the FBI, Broward Sheriff’s office, local police offices were here securing the campus and keeping us safe. That made me feel safe. If I had had a gun in my classroom with fifteen students, I wouldn’t have used it. I didn’t see the shooter. I heard the shots when I went outside, but having a gun would do me no good. If anything, if I had a gun on campus, it would have been locked in my closet, and if somebody had come in the room, in the time it would take me to get my keys and open the closet, I’d be dead.”

Lerner also took aim at the president’s assurances that only 20 percent of educators at any given school would be armed.

“The president said those of us willing to be armed would get some kind of a bonus. I’m not even given adequate money to buy supplies for my classroom, but now if I choose to carry a gun, a gun will be provided for me and I will be given a bonus?”

She continued: “I would rather see all that money go to having more security personnel on my campus, giving me more money on my paycheck. I don’t need a gun! Give me the money instead.”

In response to the president’s suggestion, English teachers Olivia Bertels and Brittany Wheaton coined the hashtag #ArmMeWith on Instagram, to call attention to more pertinent needs––like the need for more school supplies––while slamming the suggestion that arming teachers would actually keep schools safe.

“The vast majority of school personnel are uninterested in carrying a weapon into a building full of hundreds or thousands of children each day,” Bertels said. “Those desires are not being reflected in the tone-deaf suggestions being made by lawmakers as a solution to America’s gun problem.”

“Teachers already shoulder a huge burden when it comes to educating properly, due to lack of funding, support and resources and making sure their students are taken care of emotionally,” Wheaton told CNN.

Teachers around the nation responded.

I don’t need to be armed with a gun but rather #ArmMeWith •legislature that puts our children’s lives before your g… https://t.co/BzjlMOjgko
— Natalie Flaten (@Natalie Flaten) 1519219607.0

Over the weekend, the president doubled down on his proposal, despite reinvigorated calls for gun control legislation in the aftermath of the shooting. "If they go into a school, a gun-free zone is like target practice for these guys,” he said on Fox News’ Justice with Judge Jeanine. He added that armed educators would receive annual training and a yearly bonus, but that he leaves the decision "up to the states."