We Now Know How the Trump Administration Plans to Reunite Migrant Children With Their Families, and Yeah, They Have No Idea Who Their Parents Are 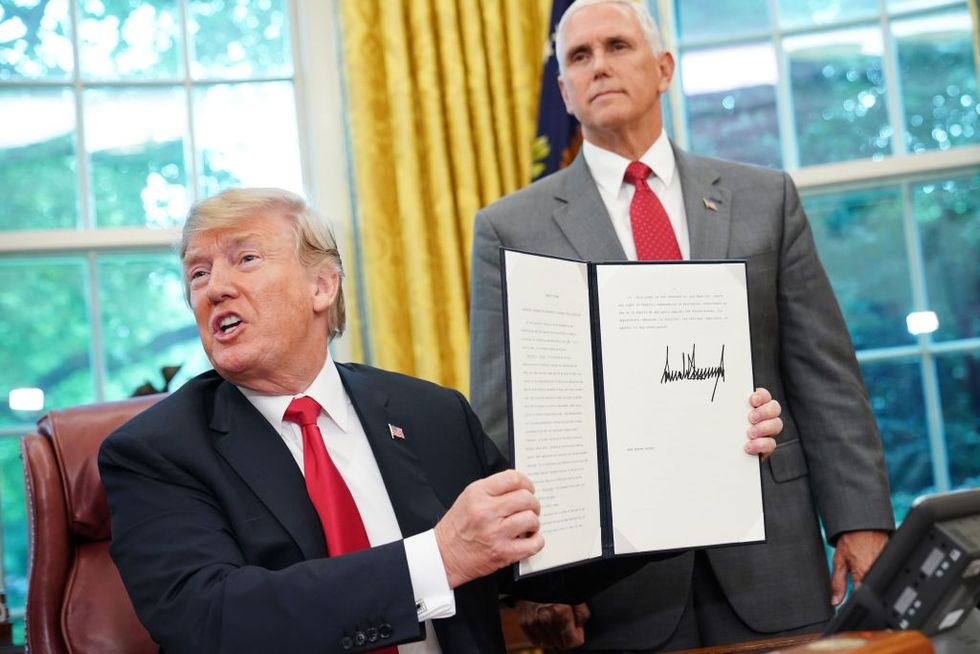 TOPSHOT - Watched by Vice President Mike Pence, US President Donald Trump shows an executive order on immigration which he just signed in the Oval Office of the White House on June 20, 2018 in Washington, DC. - US President Donald Trump on Wednesday signed an executive order aimed at putting an end to the controversial separation of migrant families at the border, reversing a harsh practice that had earned international scorn."It's about keeping families together," Trump said at the signing ceremony. "I did not like the sight of families being separated," he added. (Photo by Mandel Ngan / AFP) (Photo credit should read MANDEL NGAN/AFP/Getty Images)

The U.S. government is performing DNA tests on children and parents in an attempt to reunite migrant families separated at the U.S.-Mexico border, according to Health and Human Services Secretary Alex Azar.

"It's important to remember that information from children can at times be unreliable," Azar said, noting that the agency is reviewing the cases of nearly 3,000 children, a number that is larger than the 2,047 he'd previously told a Senate panel still need to be reunited with their parents. Azar told reporters that the number is much larger "because a court order has required HHS to reunite all separated migrant children, even those taken from their parents before zero tolerance went into effect in early May."

Some children who are part of the nearly 3,000 in the agency's custody may not qualify for reunification, Azar noted, because the children became separated from their parents on their journey to the United States, and not by Border Patrol agents.

HHS will be conducting DNA tests by taking a cheek swab of every child before matching him or her with a parent.

"The safety and security is paramount, and it is not uncommon for children to be trafficked or smuggled by those claiming to be parents," an official with the agency said.

"To our knowledge, this is a cheek swab and is being done to expedite parental verification and ensuring reunification with verified parents due to child welfare concerns," the official added, though they did not clarify how long the practice has been taking place, if the testing requires consent or if the DNA is stored in a database.

The move comes after a federal judge in the Southern District of California ordered that the government must reunite parents separated from children younger than 5 by July 10 and children ages 5-17 by July 26. These deadlines are "extreme," said Azar, warning that the deadline would likely require the agency to be a bit laxer in its vetting procedures.

"We will comply even if those deadlines prevent us from conducting a standard or even a truncated vetting process," Azar said.

The news that the government is performing DNA tests in order to reunite families marred by the humanitarian crisis which erupted in the wake of President Donald Trump's "zero tolerance" family separations policy opened up the federal government to criticism from RAICES, a nonprofit in Texas that offers free and low-cost legal services to immigrants and refugees. The aid group raised concerns about potential surveillance.

This is a further demonstration of administration's incompetence and admission of guilt. This further drives home the point we've been saying: They never registered parents and children properly," RAICES communications director Jennifer K. Falcon said.

Falcon added that it's not possible for migrant children––including some who are as young as two months old––to consent to DNA testing. RAICES said "they'd never heard of conducting DNA tests to reunite families before and they don't," according to CNN.

The news also alarmed many who criticized the government's lack of preparedness to remedy the crisis.

The president has not offered solutions for the crisis––but has continued tweeting.

Earlier today, the president sent out tweets dealing with immigration.

And the family separation saga is "likely to get worse," notes commentator Chris Cillizza.

What's even more striking is that Trump's solution to stop the family separations at the border -- an executive order that allows children to be detained with their parents -- is a stop-gap solution that is about to expire. Why? Because Trump's executive order did not override a Supreme Court decision from the early 1990s that says a child cannot be held in a detention facility for more than 20 days. Which means that on or around July 10 -- 20 days from Trump's signing of the EO on June 20 -- border enforcement officials will be required to start separating families currently being held in detention centers.

In short: The family separation crisis is likely to get worse -- and soon.

Trump's call for Congress to act is also hollow: Two comprehensive immigration bills failed in the last week. White House Press Secretary Sarah Huckabee Sanders was excoriated last week after she claimed that the president wasn't lying when he claimed he "never pushed" House Republicans to vote on immigration legislation. A look through the president's tweets proved her words were false.