George Conway Just Explained What Would Be Grounds for Donald Trump's Impeachment, and It May Have Already Happened 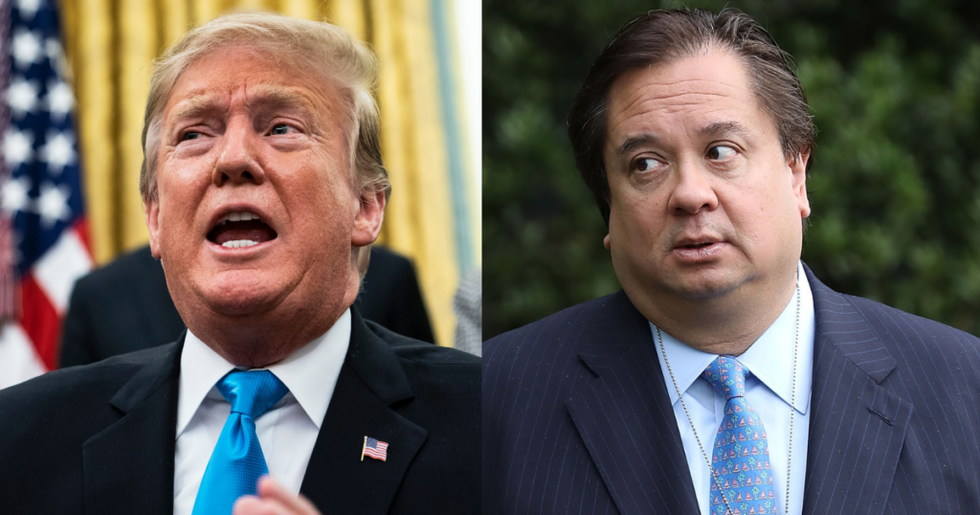 President Donald Trump "unquestionably" committed an impeachable offense when he ordered his former economic advisor Gary Cohn to block a merger between AT&T and Time Warner, George Conway, the attorney who also happens to be husband of White House Counselor Kellyanne Conway, tweeted on Monday.

Conway's tweet was in response to an explosive New Yorker report claiming that in 2017, Trump ordered Cohn and then-White House Chief of Staff John Kelly to pressure the Justice Department into stopping the merger.

Trump's opposition to the deal, Jane Mayer was informed by a source familiar with the incident, "was a matter of petty retaliation against CNN," which Trump routinely chides as "fake news."

"If proven, such an attempt to use presidential authority to seek retribution for the exercise of First Amendment rights would unquestionably be grounds for impeachment."

If proven, such an attempt to use presidential authority to seek retribution for the exercise of First Amendment ri… https://t.co/0IqN50peRd
— George Conway (@George Conway) 1551702127.0

Is anyone really surprised that Trump would try to overstep his authority?

@gtconway3d And welcome to Monday. Where everything happens and nothing changes :/
— Sarah Macdonald (@Sarah Macdonald) 1551702641.0

Add it to the list of supposed high crimes and misdemeanors.

Conway's take on this carries some serious weight.

But will Trump ever face consequences for his misdeeds?

People are not terribly optimistic.

@gtconway3d We keep seeing this behavior, yet still this abomination sits at the resolute desk. What has the Trump… https://t.co/YDvV7JlfIj
— Dianne (@Dianne) 1551705058.0

@gtconway3d The most disheartening thing is that this same tweet can be applied to something that happens every oth… https://t.co/8xb9sGuLYj
— Kevin Hardison (@Kevin Hardison) 1551702292.0

Trump's desire to meddle in legal matters was reportedly concerning to Cohn.

"Cohn, a former president of Goldman Sachs, evidently understood that it would be highly improper for a President to use the Justice Department to undermine two of the most powerful companies in the country as punishment for unfavorable news coverage, and as a reward for a competing news organization that boosted him. According to the source, as Cohn walked out of the meeting he told Kelly, 'Don’t you fucking dare call the Justice Department. We are not going to do business that way.'"

One unnamed former White House official recalled that Trump frequently “vented in frustration” over his inability to stop the media giants from merging.

“The President does not understand the nuances of antitrust law or policy,” the individual said. “But he wanted to bring down the hammer.”

An enraged Trump said at the time that the deal would be “not good for the country" one day after the Justice Department filed a lawsuit to stop the merger The department has denied that Trump directed it to do so.

Last month, the US Court of Appeals for the DC Circuit ruled that the merger could proceed.