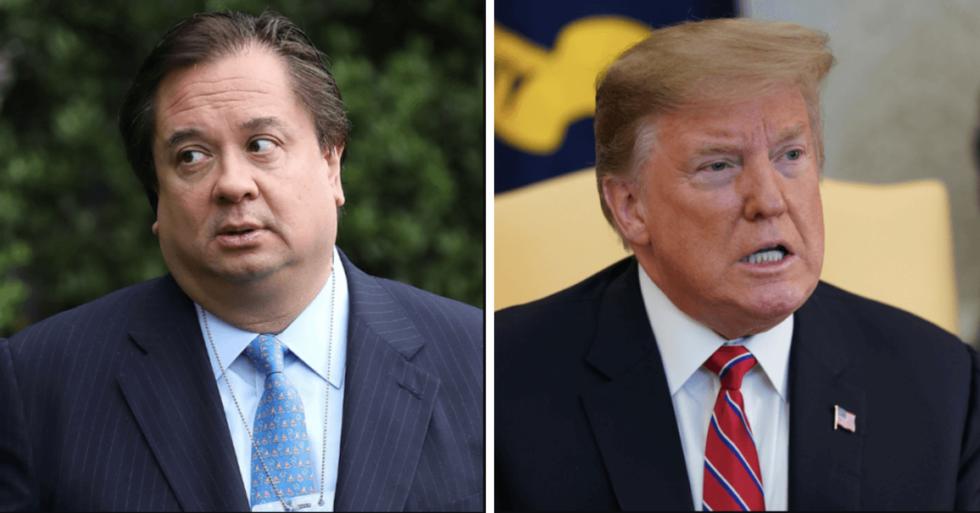 Attorney George Conway, the husband of presidential counselor Kellyanne Conway, coined a new nickname for President Donald Trump, referring to him as "Deranged Donald" in response to the news that Trump had made a baseless accusation against the British, accusing them of spying soon after he accepted an invitation for a state visit from Queen Elizabeth II.

"Deranged Donald is [at] back at it again," he wrote, adding that Trump's behavior is so erratic that stories like this one don't make it to "the top of the news... lost beneath all of the other deranged things Deranged Donald does."

Conway took a couple more shots, saying that "Deranged Donald has this neat job" that grants him access to "top secret information" that he ignores if it doesn't flatter him. He further added that the president doesn't get his information from our intelligence agencies at all, but from Fox News, which he watches and tweets about on a regular basis.

Donald Trump is a bad person. He’s a cheater, a pathological liar, a traitor who colluded with Russia, a criminal w… https://t.co/FgiN6iVMgn
— Scott Dworkin (@Scott Dworkin) 1556196922.0

Conway has been one of the president's most vocal detractors in recent weeks, particularly in light of the Mueller report's release.

Earlier this week, Conway tweeted that Trump's obstruction of the Mueller investigation was “worse than Nixon,” because, as he wrote in an April 18 column for The Washington Post, “The investigation that Trump tried to interfere with here, to protect his own personal interests, was in significant part an investigation of how a hostile foreign power interfered with our democracy.”

Conway went on to explain that in putting his own “vanity and self-interest above that of the nation and people whose laws and Constitution he swore to faithfully execute and uphold,” Trump committed acts that warrant impeachment.

“If that’s not impeachable, nothing is,” he wrote.

Put another way, a president takes an oath in which he “solemnly swear[s] [to] support and defend the Constitution… https://t.co/hJQWsZ86ho
— George Conway (@George Conway) 1556022006.0

... with our electoral process, Trump violated that oath and put his own vanity and self-interest above that of the… https://t.co/DSnfCUnsT5
— George Conway (@George Conway) 1556022134.0

Kellyanne Conway, by contrast, criticized House Democrats' push for impeachment this week, saying in response to subpoenas issued by Democrats for the unredacted Mueller report that the president made it “very clear that there’s really no reason to comply with all these requests when we have the Mueller investigation."