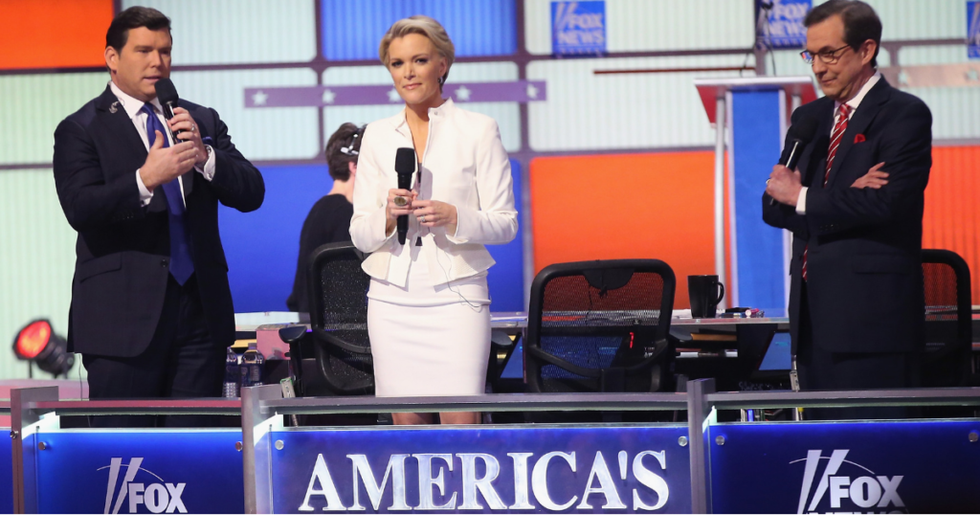 DETROIT, MI - MARCH 03: Moderators (Lto R) Bret Baier, Megyn Kelly and Chris Wallace are introduced at the Republican presidential debate sponsored by Fox News at the Fox Theatre on March 3, 2016 in Detroit, Michigan. Voters in Michigan will go to the polls March 8 for the State's primary. (Photo by Scott Olson/Getty Images)

In response to Jane Mayer's blockbuster New Yorker report on collusion between Fox News and President Donald Trump's White House, Democratic National Committee Chairman Tom Perez announced on Wednesday that Fox News will not be hosting any of the Democratic debates in 2020.

Perez said in a statement to The Washington Post that in light of Mayer's revelations, he does not believe Fox is capable of conducting a "fair and neutral debate."

“I believe that a key pathway to victory is to continue to expand our electorate and reach all voters. That is why I have made it a priority to talk to a broad array of potential media partners, including Fox News," Perez said. "Recent reporting in the New Yorker on the inappropriate relationship between President Trump, his administration and Fox News has led me to conclude that the network is not in a position to host a fair and neutral debate for our candidates. Therefore, Fox News will not serve as a media partner for the 2020 Democratic primary debates.”

This spooked the heck out of Fox News Senior Vice President Bill Sammon, who asked Perez to reconsider allowing his network's anchors, whom he dubbed "the best debate team in the business," to host a debate.

Sammon said in a statement:

“We hope the DNC will reconsider its decision to bar Chris Wallace, Bret Baier and Martha MacCallum, all of whom embody journalistic integrity and professionalism, from moderating a Democratic presidential debate. They’re the best debate team in the business and they offer candidates an important opportunity to make their case to the largest TV news audience in America, which includes many persuadable voters.”

But the moderating skills of those three individuals are not the issue. Rather, it is the manner in which Fox News has nestled itself into the Oval Office.

"I know Roger Ailes was reviled,” Charlie Black, a lobbyist, told Mayer. “But he did produce debates of both sides. Now Fox is just Trump, Trump, Trump.”

The internet has a point.

@RawStory They've never shown it before why should anyone believe it now. Whether it was giving trump questions in… https://t.co/aBiF0lyqWP
— Stephen Seidel (@Stephen Seidel) 1551901847.0

Other sources told Mayer that Ailes, Trump's now-deceased friend who was the former head honcho at Fox, warned Trump about gotcha questions ahead of the first GOP debate in 2015.

“A pair of Fox insiders and a source close to Trump believe that Ailes informed the Trump campaign about Kelly’s question. Two of those sources say that they know of the tipoff from a purported eyewitness. In addition, a former Trump campaign aide says that a Fox contact gave him advance notice of a different debate question, which asked the candidates whether they would support the Republican nominee, regardless of who won. The former aide says that the heads-up was passed on to Trump, who was the only candidate who said that he wouldn’t automatically support the Party’s nominee—a position that burnished his image as an outsider.”

These eyewitness accounts are bolstered by tweets by the president in which he expresses gratitude for Ailes's assistance throughout the Republican primary process.

No doubt, though, that prime time Trump sycophants like Tucker Carlson, Laura Ingraham, Lou Dobbs, and Sean Hannity will do what they do best: spin and distract.