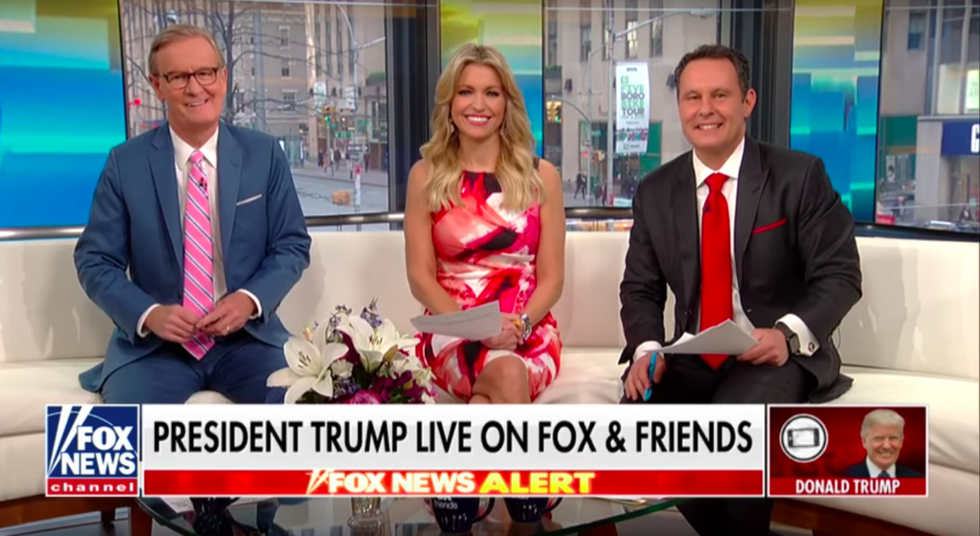 The list didn't go over well with many people, as evidenced by the social reactions. Many pointed out that these "accomplishments" cannot be credited to the president himself.

"History will show that your assessment of Trump's 'accomplishments' will not be seen through your rose-colored glasses," wrote one user.

@foxandfriends History will show that your assessment of Trump’s “accomplishments” will not be seen through your ro… https://t.co/aB4ya0RwEh
— Nancy Keenan (@Nancy Keenan) 1526310901.0

"It's strange that only Trump's base, i.e. Faux's viewers, consider these to be accomplishments," wrote another.

"Only one of those things is actually an accomplishment (charitably)," wrote @jamieel. "The rest are lies or something else."

@foxandfriends Only one of those things is actually an accomplishment (charitably). The rest are lies or something… https://t.co/rc7T8GQccC
— Jamie Eisenhart (@Jamie Eisenhart) 1526226237.0

"This is the saddest list of accomplishments I have ever seen. By a president 15 months in no less," wrote @Hoffa777. "Half of those aren't even directly attributable to trump. And the few others are things he has done but aren't really "accomplishments."

Wrote @LauraJanespoon: "On his list of 'accomplishments' is two judges rebuked Mueller investigation. Explain to me how that is an accomplishment?"

This list isn't meant to be an exhaustive one. So the question stands: What, from this list, has the president actually accomplished? To answer that, we must point to the definition of accomplishment, which Phillip Bump from  The Washington Post defines as:

MOVING THE U.S. EMBASSY TO JERUSALEM

The president has indeed moved the U.S. embassy to Jerusalem. However, he did not reach an agreeable compromise with lawmakers to do it; he did this unilaterally. He did this despite warnings from foreign policy experts and diplomats that moving the embassy could jeopardize peace talks between Israel and Palestine.

No other country has its embassy in Jerusalem. Some of the United States’ most vital allies expressed serious concerns that unilaterally recognizing the holy city as Israel’s capital will have dire consequences. They fear Trump doesn’t understand the impact of his decision, both in violence in the region and for any chance of a diplomatic settlement to the decades-old Middle East crisis.

The president's decision to move the embassy runs afoul of seven decades of foreign policy. He has previously threatened to cut aid "to any and all countries who vote in favor of a draft resolution before the United Nations, which calls for the United States to withdraw its decision to recognize the religiously-divided city of Jerusalem as Israel’s capital."

When Trump announced last week that the United States would withdraw from the 2015 Iran nuclear deal, he received considerable criticism from world leaders. Trump had long campaigned against the nuclear deal and made exiting the agreement one of the signature pledges of his candidacy during the 2016 presidential election.

The president delivered, but he did it, again, without reaching an agreeable compromise with both political parties. In fact, he was given authority to withdraw from the deal by Republicans, many of whom decried the deal when it was introduced by the previous administration.

RELEASE OF PRISONERS AND SUMMIT WITH KIM JONG-UN

Three men imprisoned by the North Korean government are now free, and that's no small feat. It's still unclear how much credit the president should receive for securing their release. And while the president has received some credit for less frosty relations between the U.S. and North Korea––Trump even referred to Kim Jong Un as a "very honorable" leader in remarks last week––he still needs to demonstrate how he will conduct himself during his anticipated summit with Jong Un next month.

One thing is for certain: The president's off-the-cuff style will remain intact. Noted Peter D. Feaver, a political scientist at Duke University who was a national security official under George W. Bush:

It’s not unusual in diplomacy for people to be yelling at each other in one moment and singing kumbaya in the next, but what makes this so dramatic is that the president went further in both directions than others have. I think that’s a reflection of his belief that we have to break the standard playbook here — we’ve tried everything else with North Korea and it hasn’t worked, so why not try something different?

The president's approval ratings have improved, now standing in the low 40s. FiveThirtyEight’s polling average places Trump at the same level of popularity he enjoyed before he fired James Comey, the former FBI Director.

But these are murky waters, according to Phillip Bump:

But now we get into the question about how big a window we’re looking at. Trump and his allies have been trumpeting his improved approval numbers in Rasmussen Reports’s polling since the beginning of April, regularly touting that he has crossed the 50-percent mark in that most friendly of polls.

The rise, per FiveThirtyEight, began in mid-December. Since mid-February, his approval ratings have been fairly static (though in the past 10 days he has been at about 42 percent). If the “rising ratings” began in December, that suggests a lot of other things that might meet the bar of “accomplishments” in the interim. His most significant legislative accomplishment happened after that! If the window opened in December, you would think that would make Fox’s list.

The president has come under fire for providing misleading poll insights; he claimed most recently that his support among African Americans had doubled. It had not.

The president's attacks against Robert Mueller, the special counsel in the Russia probe, have only intensified since his personal attorney, Michael Cohen, had his home, office, and hotel room raided by the FBI.

"They were not cases that had anything to do with Trump directly, one involving questions during the trial against Paul Manafort for financial crimes and the other against the Russians indicted by Mueller," writes Bump. "In the latter case, the term 'rebuke' is a bit strong; the judge ruled against Mueller on a procedural question."

The economy had been doing rather well prior to Trump taking office and continues to improve. Last week, he claimed that the media would have ignored these job gains even if he had predicted them correctly, particularly that the economy would have added 3.3 million jobs by now after the election. However, these job gains are precisely what projections would have suggested.

The president has also praised his administration for the "booming" stock market, but stocks don't reflect an improving economy or earnings.