Fox and Friends Tweeted a Poll Asking If the Benefits of Medicare for All Would Outweigh the Cost, Regretted It Almost Immediately 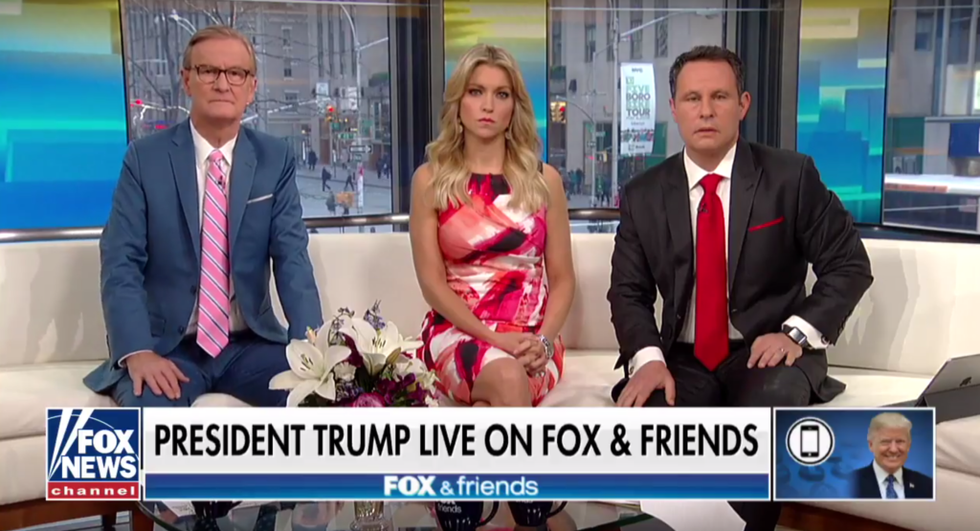 "Bernie Sanders' 'Medicare for all' bill estimated to cost $32.6 trillion, new study says. Would the benefits outweigh the costs?"

And the result was a bit of a surprise, no doubt, for the conservative outlet. Of more than 31,000 people who responded, 73 percent said Yes - that the benefits of a single-payer health care system in the United States would outweigh the projected cost of $32.6 trillion over ten years.

Twenty-seven percent of respondents said No.

Neither did actor Rob Delaney.

Nor Bonnie Castillo, executive director of National Nurses, the largest organization of registered nurses in the United States.

The $32.6 trillion figure was the result of a study funded by the billionaire brothers Charles and David Koch, who have long advocated for abolishing Medicare and Medicaid.

The George Mason University-led study found that the "U.S. could insure 30 million more Americans and virtually eliminate out-of-pocket health care expenses," said Matt Bruenig of the People's Policy Project. In his analysis, Bruenig added that Sanders' plan would also save, yes save, a "whopping $2 trillion in the process" over that same ten-year period.

Bruenig also noted that the study's findings were published to be intentionally misleading.

"At first glance, it is strange that the Mercatus center...would publish a report this positive about Medicare for All," writes Bruenig.

"The claim that 'even the Koch organizations say it will save money while covering everyone' provides a useful bit of rhetoric for proponents of the policy," he adds.

But the real game here for Mercatus is to bury the money-saving finding in the report's tables while headlining the incomprehensibly large $32.6 trillion number in order to trick dim reporters into splashing that number everywhere and freaking out.

The same can be said for the Fox & Friends poll, however, social media saw right through it. In addition to voting overwhelmingly in support of the idea of universal healthcare, Twitter users shared their thoughts on the matter.

Medicare for all is a "bargain compared to what they would pay through private insurance and would be much better coverage." Canadians would know, eh.

Our market-based system is a "failure," according to others.

Followers also cited the study, which concluded that the benefits of Medicare for all would outweigh the costs.

"All told, 'Medicare for All' would actually slightly reduce the total amount we pay for health care," the study concludes.

"Even if you take the report's headline figures at face value, the picture it paints is that of an enormous bargain," Bruenig said. "We get to insure every single person in the country, virtually eliminate cost-sharing, and save everyone from the hell of constantly changing health insurance all while saving money. You would have to be a fool to pass that offer up."

@foxandfriends Didn't that same study you guys are referencing conclude that the benefits would actually outweigh that cost?
— HellblazerHawkman (@HellblazerHawkman) 1533051017.0

@foxandfriends That same study said that it would be more expensive to not implement Medicare for all. But nice cherry picking!
— Joseph Noel (@Joseph Noel) 1533039250.0

"They know their viewers didn't actually READ the study." Yet, miraculously, here we are.

Considering the savings, Medicare for all should be a "no-brainer."

@foxandfriends Considering the costs would be $3 trillion less than our current system which only insures a tiny fr… https://t.co/hy9zdvD7Ny
— William LeGate (@William LeGate) 1533091424.0

The United States is still the only industrialized country that does not guarantee the right to health care to its citizens.