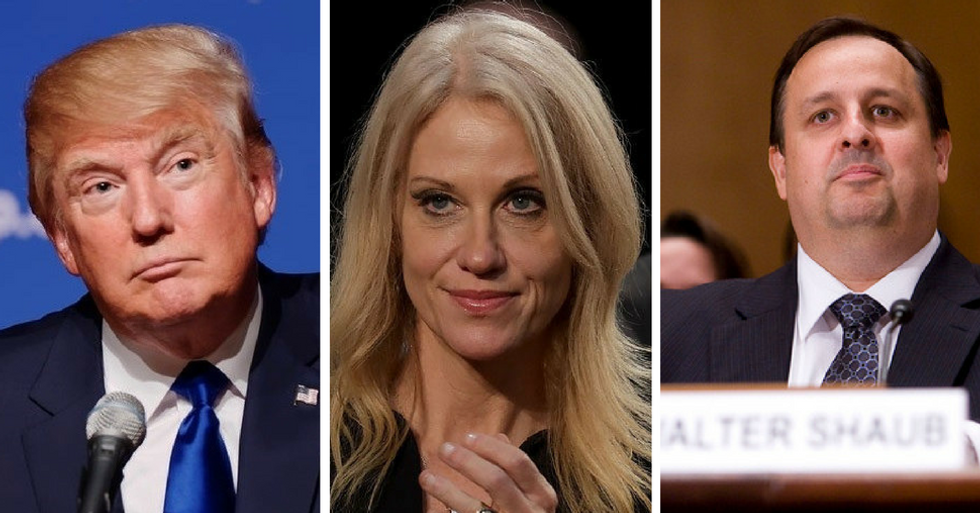 The Office of Government Ethics rebuked the White House for failing to discipline Kellyanne Conway, counselor to President Donald Trump, after she encouraged Americans to purchase Ivanka Trump’s products during a Fox News broadcast.

In letters to both the White House Counsel's office and top members of the Oversight and Government Reform Committee, OGE director Walter Shaub criticized the White House for its "extraordinary assertion," made in a recent letter, that "many regulations promulgated by the Office of Government Ethics ('OGE') do not apply to employees of the Executive Office of the President."

"The assertion is incorrect, and the letter cites no legal basis for it," Shaub wrote. "Presidential administrations have not considered it appropriate to challenge the applicability of ethics rules to the entire executive branch. It is critical to the public's faith in the integrity of government that White House employees be held to the same standard of ethical accountability as other executive branch employees."

Schaub also expressed concern over the lack of discipline of Conway. "I remain concerned about Ms. Conway's misuse of position," Shaub wrote. "Not taking disciplinary action against a senior official under such circumstances risks undermining the ethics program." He noted there is "strong reason to believe that Ms. Conway has violated the Standards of Conduct" by promoting private gain for the president's family, adding that "disciplinary action is warranted."

A regulation from the OGE bans federal employees from endorsing products or companies and prohibits the use of public office for the personal gain of oneself or friends and relatives.

Under the regulation, the director of OGE can notify the employee of the violation. The director can then ask the agency’s workers to investigate. A first offense would likely result in a mere warning. However, the director could also recommend disciplinary action, including suspension and loss of pay or termination.

Conway's remarks, in which she told Fox News she found it “ironic that you’ve got some executives all over the internet bragging about what they’ve done to [Ivanka] and her line,” were an apparent endorsement:

Yet, they’re using the most prominent woman in Donald Trump’s — you know, most prominent — she’s his daughter, and they’re using her, who has been a champion for women empowerment, women in the workplace, to get to him. I think people could see through that. Go buy Ivanka’s stuff is what I would tell you. I hate shopping. I’m going to go get some myself today… This is just wonderful line. I own some of it. I fully — I’m going to give a free commercial here. Go buy it today, everybody. You can find it online.

In a letter to Schaub dated February 28, Stefan Passantino, the White House Deputy Counsel, responded that Conway had "acted inadvertently," but he did not say the White House would discipline her for the ethics violation. It was then when he asserted that many of OGE's ethics do not apply to the Executive Office. He did add, however, that "the Office of the White House Counsel has instructed all such employees to abide by 3 CFR 100.1," the segment of ethics law that pertains to Executive Office employees." He did not specify what he meant by "many," nor did he explain why those rules do not apply to employees of the executive office.

Ethics experts who have considered the White House's argument that "many" ethics don't apply to Executive Office employees conclude that it may rest on the definition of "agency." A number of ethics rules do state that they apply to employees of government "agencies," which determines which rules apply to whom. (In a footnote to his letter, Passantino cites The Ethics in Government Act of 1978, which states that the OGE director "is authorized only to provide overall direction of Executive branch policies related to officers and employees 'of any executive agency, as defined in Section 105 of Title 5 United States Code.'")

In an email to NPR, Norman Eisen, an Obama administration ethics official, dismissed the Trump White House's approach. "This is nonsense. There are debates about whether for other purposes the [White House] is an agency," Norman Eisen wrote. "Never before for ethics purposes."

The issue over Conway's ethics violation prompted Representative Elijah Cummings (D-MD), the top Democrat on the House Oversight Committee, to write his own letter, this one to White House Counsel Donald McGahn, demanding which regulations the White House believes are "inapplicable to employees of the Executive Office of the President." He also asked what its justification is for believing OGE rules do not apply to Executive Office employees. The White House has not yet responded to his questions.