Eric Trump Just Made a Questionable Accusation Against Jeff Bezos, and Twitter Is Dragging Him Hard 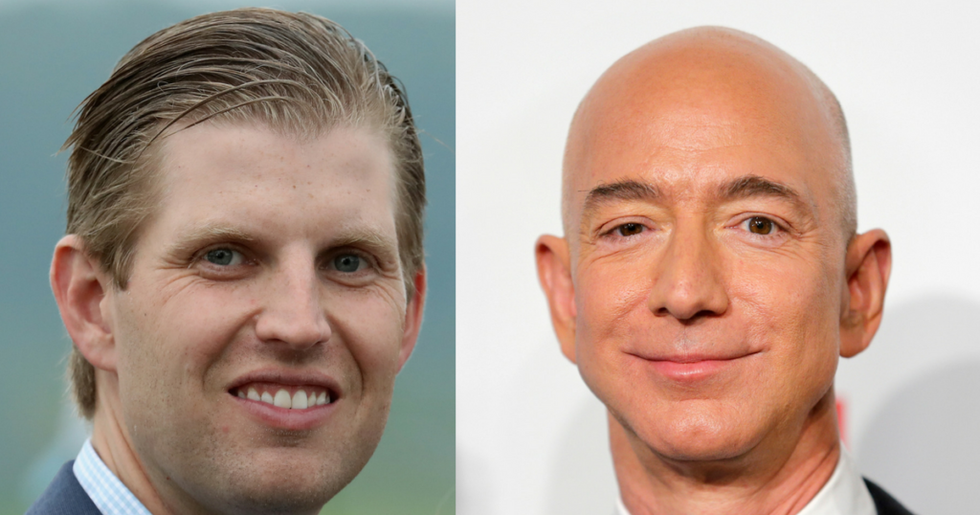 Eric Trump, the second son of President Donald Trump and Vice President of the Trump Organization, accused Jeff Bezos and the Washington Post of "ugly and relenting" attacks on his family and their "great company" in a Twitter rant Friday afternoon.

"The level of hatred and the willingness to disparage my family and our great company has never been so ugly and unrelenting as I have seen recently by the @WashingtonPost," Trump griped. "It is clearly coming from the top with one motivation in mind. @JeffBezos."

Trump is asserting that Bezos, the world's wealthiest individual and owner of Amazon and the Washington Post, is using his business empire as his own personal means of retaliation against the Trump family.

Retaliation against what, however, remains elusive, as does any evidence of an agenda.

Trump's tweet is part of a larger pattern of attacks on Bezos and his businesses by the president, who routinely chides WaPo as "fake news" and frequently targets the media outlet for supposed biased reporting against him.

Perhaps there's some resentment over Bezos' enormous wealth, which topped a staggering $150 billion in June. President Trump's official net worth is unknown because he has refused to release his tax returns.

In June, the president said: "The Amazon Washington Post has gone crazy against me..."

The Amazon Washington Post has gone crazy against me ever since they lost the Internet Tax Case in the U.S. Supreme… https://t.co/OUL6J4UdEo
— Donald J. Trump (@Donald J. Trump) 1532352075.0

...and then accused the paper of being "nothing more than an expensive (the paper loses a fortune) lobbyist for Amazon."

The president has also whined that WaPo does "nothing but write bad stories even on very positive achievements - and they will never change!"

...and the Amazon Washington Post do nothing but write bad stories even on very positive achievements - and they will never change!
— Donald J. Trump (@Donald J. Trump) 1532891359.0

A few days later, the president bemoaned the Post again, this time regarding anonymous sources, which are an essential tool for journalists.

"The Washington Post is constantly quoting 'anonymous sources' that do not exist. Rarely do they use the name of anyone because there is no one to give them the kind of negative quote that they are looking for. They are a disgrace to journalism but then again, so are many others!"

The Washington Post is constantly quoting “anonymous sources” that do not exist. Rarely do they use the name of any… https://t.co/O8OQzKImp9
— Donald J. Trump (@Donald J. Trump) 1530653711.0

You can peruse all of the president's tweets here.

Trump's lunchtime Twitter tantrum was savagely trolled by people who are tired of the Trumps trying to portray themselves as victims.

@EricTrump @washingtonpost @JeffBezos Eric, your family has worked hard for many years to earn all the disdain, cri… https://t.co/bJWCqmCzYA
— July Wolfe 😎 (@July Wolfe 😎) 1533329294.0

@EricTrump @washingtonpost @JeffBezos Your family is ugly and a disgrace to america. You don't get it yet.
— Τζον Σκιβερ (@Τζον Σκιβερ) 1533328511.0

The level of hatred and the willingness to disparage my family and our great company has never been so ugly and unr… https://t.co/ObFh0HPWYr
— Eric Trump (@Eric Trump) 1533323799.0