The Call of the Wild Comes at a Distinct Cost. 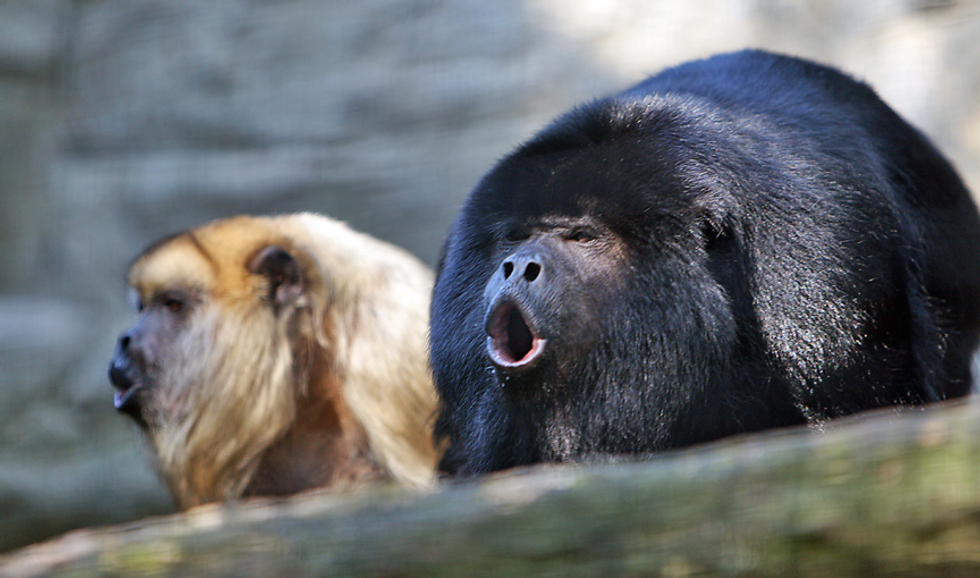 New research suggests that, as with humans, some female monkeys find deep male voices more attractive than their higher-pitched brethren. In a cruel kick in the pants, this research also suggests that – at least with howler monkeys – the deeper the voice, the smaller the testicles.

In a study published in Current Biology, a team of Cambridge University researchers comparing the size of howler monkeys’ hyoid bones (located in the voice box) and testicle size found a trade-off between vocal production and sperm production. A trade-off which has, predictably, been reduced to “calls versus balls.”

The researchers argue that the trade-off occurs because it takes too much energy to produce both a very deep call and a large amount of sperm. Alternatively, they argue that the draw of the deep voice is so alluring that an investment in larger testes is simply not needed.

The researchers also found that males with smaller hyoids tend to have a different social structure than those with larger hyoids. Males with larger hyoids – and correspondingly smaller testes – tend to live in small social groups, often with only one male, in a so-called “harem” social model. In these societies, males need to invest more energy in fending off

males from their harem. The deep call serves double duty by both helping the monkey woo females and by scaring off would-be rivals.

In contrast, males with smaller hyoids tend to live in large groups, with multiple males living within it. In these groups, the males do not have exclusive access to females, and so the quantity and quality of sperm becomes more important. Energy needs to be invested in the production of as much sperm as possible so as to increase the chances of being the one to impregnate the female – a phenomenon known as “sperm competition.”

As one of the lead scientists in the study, Jacob Dunn, commented “You can’t invest in everything at once.” He continued that “there is strong evidence that sperm production is actually quite costly.” Similarly, howling for upwards of an hour at a time is “a very strenuous activity.”

Of course, the burning question is – does this translate to humans?

There are studies that may hint at similar evolutionary trade-offs in humans. For instance, one study shows that men with deep voices have more sexual partners, and therefore more opportunities to produce, whereas another showed lower sperm quality in deeper-voiced men.

However, the current study’s authors warn against drawing too quick a correlation between humans and monkeys. Said Leslie Knapp, one of the study’s main authors, a deep voice and testes size aren’t quite so important for humans as for howlers. “Human males try to show a female what their value is with other things: resources, care of offspring and other attractive characteristics like being successful in business or driving a fast, flashy car.”

Thus while human males may attempt to impress by strutting their stuff in other, non-vocal ways, it appears we cannot accurately reduce this principle to “struts versus nuts.” At least, not without further scientific study.