Obama's Task Force Misses Deadline: Is it Too Late to Save the Bees? 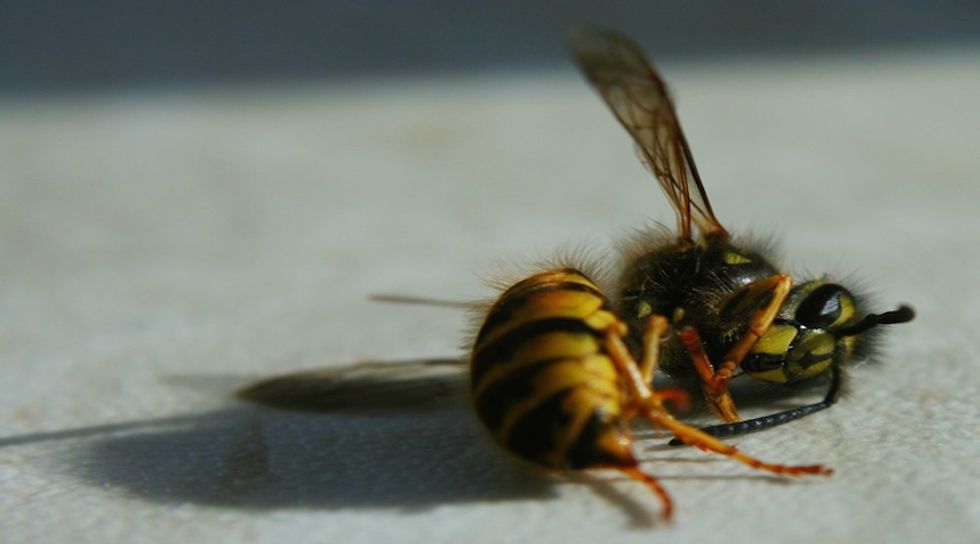 In a recent letter to the White House, CEOs of leading environmental groups urged President Obama to take strong and swift action against insecticides that are devastating honey bee and wild bee populations, threatening the nation's food supplies.

These insecticides, called “neonics” or "neonicotinoids" are particularly lethal to bees, because “they poison the whole treated plant including the nectar and pollen that bees eat, and they are persistent, lasting months or even years in the plant, soil, and waterways.” What happens next to the bee is devastating, as illustrated by beekeeper James Doan. "The pesticide blocks the nerve endings of the bee, and so the bee is paralyzed and then what happens is they starve to death, so you see the bee shaking, and it's a very horrific way of dying for a bee."

The National Resources Defense Council (NRDC), one of the agencies responsible for the letter, warns that “the crisis in bee deaths represents a potential crisis of food security - our ability to grow our own food will be threatened if bee declines continue at the current rate. Out of some 100 crop species responsible for providing 90% of the world's food supply, 71 are dependent on bee pollination. The estimated annual value of crops dependent on honey bee pollination is $15 billion in the United States alone, with another $9 billion from pollination by other species. In addition to fruit, vegetable, and seed crops that are pollinated by bees, bee-pollinated forage and hay crops, such as alfalfa and clover, also are used to feed the animals that supply meat and dairy products.”

According to the White House, "The number of managed U.S. honey bee colonies dropped from 6 million colonies in 1947, to 4 million in 1970, 3 million in 1990, and just 2.5 million today" (June 2014).  At their current annual disappearing rate of 30 percent, bees could be completely wiped out in a few years.

A good start, but no finish line in sight

In June of last year, President Obama issued a memorandum directing the EPA and the USDA to co-chair a new Pollinator Health Task Force (PHTF) to develop a strategy to save the bees. In addition to the EPA and the USDA, the PHTF included representatives from a broad array of federal agencies from the U.S. Departments of State, Defense, Transportation and Energy, to the National Science Foundation to the National Security Counsel, as well as the Office of Science and Technology Policy.

The PHTF doesn't seem capable of taking swift action. It missed a December 2014 deadline to come up with a plan, and it has now indicated its report may not arrive

That may be too late for the bees. "If current rates of bee die-offs continue,” the NRDC letter says, “it is unlikely that the beekeeping industry will survive EPA’s delayed timeline, putting our agricultural industry and our food supply at serious risk."

Feeling the sting, the pesticide lobby fights back.

The European Union, as well as the states of Minnesota and Oregon and cities including Spokane, WA; Seattle, WA; Eugene, OR; Shorewood, MN and the province of Ontario, Canada have already passed measures to address the use of neonicotinoids.

But the pesticide manufacturers are lobbying hard to block action. And the continued delays by the EPA are putting the bees at even greater risk.

Powerful D.C. lobbying groups, "including farm organizations, seed producers and pesticide companies such as Monsanto, Bayer CropScience and Syngenta," are hastily scrambling to downplay the problem in an effort to avoid a ban akin to the two-year moratorium on neonicotinoids in the European Union.

Bayer has launched a two-prong public relations strategy. They've created what they call "Bee Care Centers" in the EU and US (currently only in North Carolina) and taken on a second lobbying team headed by former House Majority Leader Richard Gephardt, D-Mo. Bayer calls the Bee Care Centers a  "hub to promote worldwide bee health initiatives," but it appears that their primary goal is to cast doubt on whether the pesticides are truly at fault for the disappearing bees.

The effect of a national ban on neonicotinoids could impact their bottom line in a big way: neonicotinoids currently shield over 90 percent of the U.S. corn crop from pests. Therefore, the lobbying push has been backed by correspondingly deep pockets. Bayer spent more than $2 million for its lobbying efforts in the first quarter of 2014, while Syngenta, meanwhile, "paid out $350,000 in the same interval for total lobbying expenditures."

Environmentalists and public-health and food-safety advocates are also desperately and diligently trying to prove that the pesticides are killing off honeybees at an alarming rate, but have considerably less cash at their disposal. The National Journal reported that "[t]he Center for Food Safety, which lobbies against neonics, spent only $10,000 total on lobbying efforts in the first quarter of [2014]. Friends of the Earth, an environmental group, which contends neonics are the leading cause of bee deaths, spent just under $13,000."

It's not just about the honey.

Dr. Richard Fell, a professor of entymology at Virginia Tech and currently serving as Pollinator Health Advisor to the National Pest Management Association, explains that "without bees to spread pollen from the male parts of plants to the female parts, fruit may not form."

He further cautioned that "[t]he biggest impacts from decreased hive numbers will be felt by farmers producing crops with high pollination requirements, such as almonds. Consumers may see a lowered availability of certain fruits and vegetables and some higher costs."

Last summer, a Whole Foods Market in Providence, RI, published a startling photograph of what their produce section would look like without bees. They temporarily pulled off shelves over 50 percent of their available produce, including apples, onions, carrots, lemons, limes, melons, zucchini, kale and broccoli, which all come from plants dependent on pollinators.

In addition to their agricultural significance, honey bees are a "keystone, indicator species." The Pesticide Action Network states alarmingly that "their decline points to (and will likely accelerate) broader environmental degradation in a kind of ripple effect. Pollinator population declines are thus a disproportionately important piece of the current collapse in biodiversity that [many] biologists believe poses an even greater threat to humanity than the global warming which contributes to it."

Beeline to save the bees

Grassroot organizations are popping up all over the country to support efforts to save the bees, at both the national and local level.

Donate!  Concerned individuals can donate money through environmental organizations (such as Environment Oregon) to provide the funding needed to mobilize against the pesticide manufacturers and call the EPA to swifter action.

Educate!  Vanishing of the Bees is a full-length documentary, narrated by Ellen Page, discussing the scope of the problem and offering ideas for what people can do to help. (There is also a shorter 34-minute educational version, accompanied by a study guide designed to be shown in schools and geared towards students in Grades 5-12.) Both DVDs can be ordered on their website. You can also offer to host a screening of the movie.

Advocate!  Among others, Honeylove is a 501(c)(3) non-profit group based in Los Angeles that supports the educational outreach, community action and advocacy efforts to protect the health and well-being of honey bees. They are looking for both volunteers and interns to run community workshops, help with social media, assist at their bee yard, and teach the public about the importance of bees at special events.

Pollinate!  Honeybee Haven enables people to take a pledge to provide a honeybee haven with access to pesticide-free food, shelter and water.