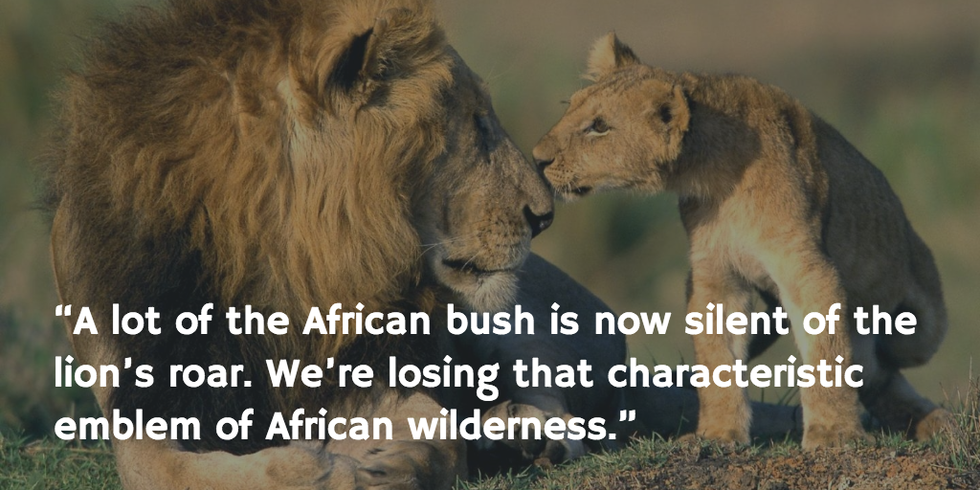 The lion is a symbol of ferocity, of freedom, of power. But according to a recent study published in the Proceedings of the National Academy of Sciences, the lion is losing the race for survival.

A century ago, more than 200,000 lions roamed across Africa. Today, it is estimated that less than 20,000 remain. They are extinct in nearly half of Africa’s countries, and have disappeared from over 90 percent of their historic range. In West Africa, only 400 lions remain, and that number is expected to fall again by half in the next twenty years.

“A lot of the African bush is now silent of the lion’s roar. We’re losing that characteristic emblem of African wilderness,” said Luke Hunter, one of the study’s co-authors and president of Panthera, an organization dedicated to the conservation of lions and other big cats.

Hunter and his colleagues looked at over 8000 lions in 47 different populations across Africa, going back to 1990. The results were startling. West and Central Africa are expected to lose half of their lion population in the next two decades. East Africa stands to lose over a third of its lions in the same period.

Why Are Lions Disappearing?

Although the killing of Cecil the Lion made big news, very little of the lion population’s decrease is due to trophy hunting. “Even if trophy hunting of lions was banned today, it still

wouldn’t avert the decline, because the factors driving the decline are much bigger,” said Hunter.

However, the two biggest causes are still man-made. Pastoralists who manage herds of animals often trap and kill lions that threaten their livestock. And poachers systematically bring down the lion’s traditional prey—such as zebra and wildebeest—through indiscriminate trapping. With fewer animals to hunt, lions are often left without enough to eat.

The Far-Ranging Effects of the Dwindling Lion Population

Allowing the lion population to continue to fall would be bad news for more than just the lions. Their decimation is expected to have a huge impact on Africa’s overall ecosystem. Said Hunter: “The lion plays a pivotal role as the continent’s top carnivore, and the free-fall of Africa’s lion populations we are seeing today could inexorably change the landscape of Africa’s ecosystems.”

As a top carnivore, the lion plays a key role in regulating species – both the ones that lions directly eat (such as zebras, hyena and buffalo) – but also for animals lower down the food chain. For instance, if the zebra population explodes because there are not enough lions preying on them, the zebra can out-compete other herbivores, which can significantly reduce food resources for many other species down the chain.

The reduction of the lion population can also lead to an increase in “mesopredators,” which are typically harder to control. In some parts of Africa, the loss of the lion has led to an explosion of baboon mesopredators, who have taken to brazenly raiding crops. “The issue is

very complex, and a lot of the consequences are not known,” Oregon State University professor William Ripple said. “But there’s evidence that the explosion of mesopredator populations is very severe and has both ecological and economic repercussions.”

The small increase in the lion population in Southern Africa is giving some conservationists hope. However, most of these lions live in fenced-in reserves, and the countries have wildlife tourism economies that require the devotion of significant resources to conservation.

In the western and central countries hardest hit, scarce resources and limited funding makes conservation more difficult – but not impossible. Teaching people to protect their herds in ways other than through hunting – for instance, by moving livestock into corrals at night – could go a long way to slowing or even halting the decline. However, to really halt the process, more conservation workers would be needed to patrol wildlife refuges and remove snares, Hunter opined.

“Lions and people both evolved in Africa and co-existed for millennia, but today, one is losing the race for survival,” said Hunter.

Whether people will work to halt the race remains to be seen.