Have we learned nothing? 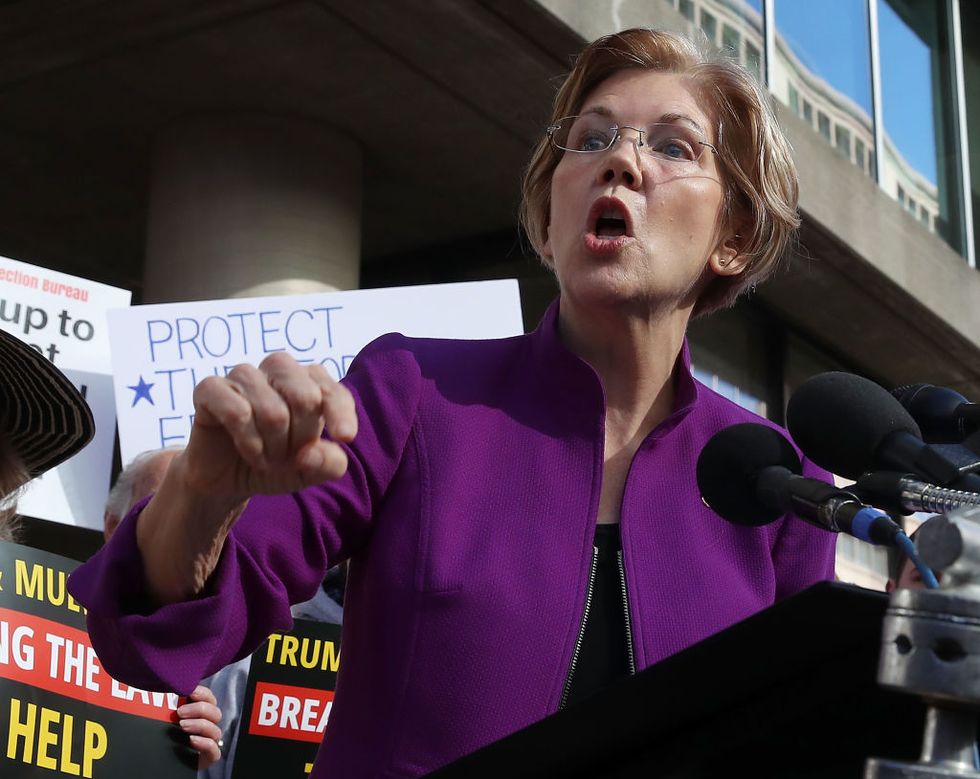 Sen. Elizabeth Warren (D-MA) speaks during a protest in front of the Consumer Financial Protection Bureau (CFPB) headquarters on November 28, 2017 in Washington, DC.

Senator Elizabeth Warren (D-MA) is naming and shaming Senate Democrats who ignored warnings from progressives and sided with Republicans to advance S.2155 (the Economic Growth, Regulatory Relief and Consumer Protection Act, known as the Crapo bill for its primary sponsor, Mike Crapo, a Republican senator from Idaho,) a major bank deregulation bill.

Legislators are expected to pass the measure in the coming days. Should it become law, it would significantly loosen Wall Street regulations put in place by the Dodd-Frank Wall Street Reform and Consumer Protection Act following the 2008 financial crisis.

"The people in Congress may have forgotten the crash 10 years ago, but I guarantee that people across this country have not forgotten the pain that these giant banks caused,” Warren said as she called on her colleagues to break from the legislation, which is backed by the White House. “They do not want to see Congress move toward deregulating these banks.”

Before her speech, Warren issued a warning to her social media followers, calling the legislation "a punch in the gut to American consumers."

I’m about to speak on the Senate floor about why the #BankLobbyistAct is a punch in the gut to American consumers.… https://t.co/C1glXO6oex
— Elizabeth Warren (@Elizabeth Warren) 1520371610.0

Warren later took to her Twitter account to share the list of Democrats who supported the new measure. "This bill," she noted, "wouldn't be on the path becoming law without the support of these Democrats. The Senate just voted to increase the chances your money will be used to bail out big banks again."

Senate Republicans voted unanimously for the #BankLobbyistAct. But this bill wouldn’t be on the path to becoming la… https://t.co/dQrvwXS4jE
— Elizabeth Warren (@Elizabeth Warren) 1520366853.0

The Democrats who supported the measure are:

It is especially troubling that the #BankLobbyistAct has the support of more than a dozen Senate Democrats – an ugl… https://t.co/0HRPPNY0Vp
— Public Citizen (@Public Citizen) 1520356204.0

The measure is one of the few important bipartisan pieces of legislation to move through Congress and has several elements which would scale back banking regulations. They include:

The bill does, however, include some customer protections. For example, it would mandate credit reporting companies to provide free credit monitoring to military members. Conservative legislators have said they oppose this, noting it would open up firms to lawsuits.

Instead of seeking out thank you letters from big banks and their lobbyists, we should be working on what our const… https://t.co/AAVfgtDgzj
— Elizabeth Warren (@Elizabeth Warren) 1520290617.0

The Democrats who helped draft the bill believe the bill is, according to one report, "an opportunity to show that things can still get done in a bitterly divided Congress.

“This is old-school legislating,” Senator Heitkamp said, who also said she believes critics are exaggerating the impact the bill would have.

“I am not going to let this legislative history get papered with misstatements about this bill,” she said.

Senator Warner, meanwhile, says the bill will be subject to several additions, via a so-called manager’s amendment, including new student loan safeguards.

But Senator Warren is adamant that the measure could serve as a precursor to another financial collapse:

In an op-ed for The New York Times, Mike Konczal, a fellow with the Roosevelt Institute, also criticized Democrats who've supported the bill:

Why would some Democrats provide support for a rollback of Dodd-Frank? Proponents argue that this bill provides much needed relief for community banks and credit unions, which, these proponents claim, face enormous difficulties. They also say that it doesn’t endanger financial reforms aimed against the largest and most dangerous players. But that view is mistaken: This bill goes far beyond the health of community banks and credit unions. It removes protections for 25 of the top 38 banks; weakens regulations on the biggest players and encourages them to manipulate regulations for their benefit; and saps consumer protections. What do Democrats get in return? Nothing substantive that they should want. They could demand better funding for regulators or an appointment to the Consumer Financial Protection Bureau — or a vote on gun control.

Elsewhere, he notes that the measure would "encourage regulatory shenanigans," including violations of the Volcker Rule:

Other changes make life much easier for the largest players and encourage regulatory shenanigans. Dodd-Frank introduced more “stress tests” — fire-drill-like exercises that ensure the banks can handle a major downturn. The Crapo bill reduces their frequency for all the major players’ internal tests, from Citigroup to JPMorgan Chase on down. The Crapo bill will introduce a one-word change from “may” to “shall” that will pave the way for the biggest, most politically connected financial firms to argue that regulations should be tailored to be weaker for themselves, creating a race-to-the-bottom dynamic in what has been, so far, fair rules written for all banks to follow together. It allows community banks to violate the Volcker Rule, introduced in Dodd-Frank to prevent banks from engaging in hedge-fund-like gambling with their own funds.

Democrat support, he concludes, is a sign that the party doesn't know how to broker deals with a president who considers himself the finest dealmaker of them all:

Instead of signing a bill that is well targeted to community banks or strengthens other parts of Dodd-Frank, Democrats got an agreement that consumers can freeze their credit scores once a year. Consumers are going to need that with the abuses President Trump is allowing to happen, now with moderate Democratic support. The Democrats promised a better economic “deal” than Mr. Trump. Those supporting this bill instead show that they can’t make any deal at all.

The White House has backed the legislation, a move that lies in stark contrast to the point of view then-candidate Donald Trump expressed in an ad titled “Donald Trump’s Argument for America," which was released in the final week of the election.

As images of images of bankers and politicians flash onscreen, Trump says, “The establishment has trillions of dollars at stake in this election for those who control the levers of power in Washington and for the global special interests they partner with, these people that don’t have your good in mind.”