Democrat Who Will Chair the House Oversight Committee Just Revealed What He Intends to Investigate, and Trump Should Be Very Worried 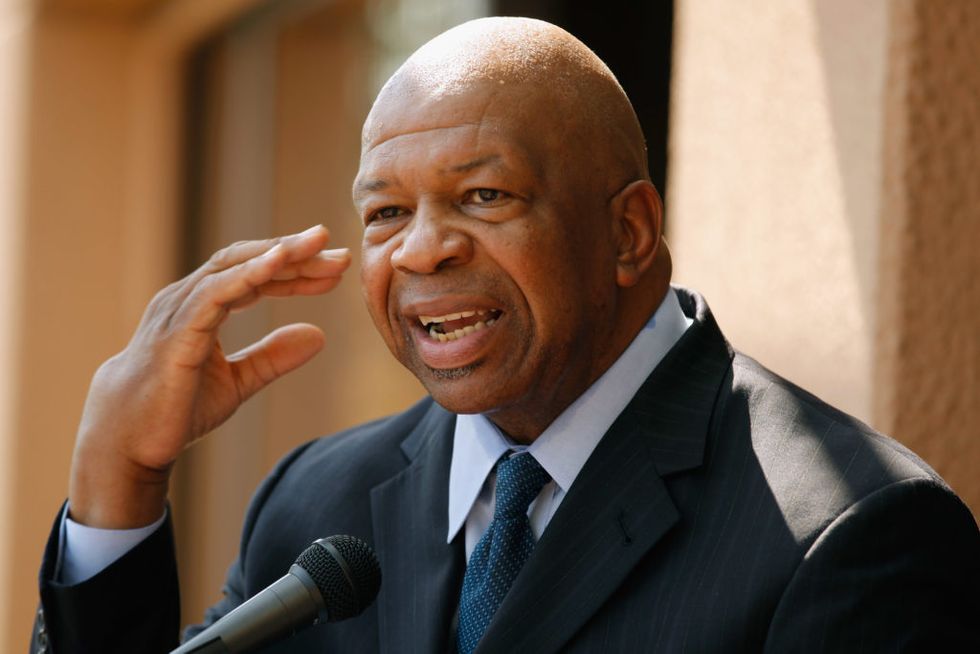 WASHINGTON - SEPTEMBER 23: Rep. Elijah Cummings (D-MD) delivers remarks while responding to the House Republican's unveiling of their "Pledge to America" outside of the Democratic National Committee headquarters September 23, 2010 in Washington, DC. House Democrats attacked the pledge as a public relations stunt that would take the country back to the economic and tax policies of former President George W. Bush. (Photo by Chip Somodevilla/Getty Images)

Now that Democrats have formally taken control of the House of Representatives, President Donald Trump will find himself having to comply with investigations into members of his administration.

Representative Elijah Cummings (D-MD), who will chair the House Oversight Committee, has signaled he will launch probes into the Trump administration after taking office on January 3:

“I want to look at all the things the president has done that go against the mandates of our Founding Fathers in the Constitution,” he said. “We need accountability, transparency, integrity, and honesty from this Administration.”

Cummings has wasted no time: His committee has already compiled a list of 64 subpoenas and inquiries into Trump administration activities that were denied when Republicans controlled the chamber. The budget for the Democrats will allow them to hire lawyers and investigators and fill key staffing positions.

Cummings says that he will not lose sight of issues important to his constituents, such as the high prices of prescription drugs, as he contends with investigating the Trump administration.

Cummings said they would also look into matters involving the use of security clearances in the Trump administratio… https://t.co/qtYvPBY5kj
— Manu Raju (@Manu Raju) 1541564213.0

"I'm not looking for retribution, life is too short,” he said. While we are dealing with whatever may come in the storm of Trump, I have to keep in mind that there are people who have to live day to day.”

Cummings retained his seat representing Maryland's Seventh District, receiving 76 percent of the vote according to the most up to date returns. He thanked his supporters as the race was called last night.

"I am immensely grateful for the opportunity to continue to serve you," he wrote.

Thank you, voters of Maryland’s seventh district for showing your faith in me and electing me to represent you in C… https://t.co/yZmZPbaMiA
— Elijah E. Cummings (@Elijah E. Cummings) 1541564719.0

Many agree that Cummings, a noted critic of the administration, will be a "force to be reckoned with" as chair of the Oversight Committee.

Elijah Cummings chairing House Oversight will be a force to be reckoned with.
— Brian Fallon (@Brian Fallon) 1541569442.0

Of all the ups and downs of election night up and down the ballot, the single most consequential result could be th… https://t.co/7uP5cvxuB6
— Gregory Korte (@Gregory Korte) 1541562874.0

As Trump revels in key Senate victories, he should think about this: -- Elijah Cummings will be chair of the Oversi… https://t.co/m7baRTmP8p
— Brian Goldsmith (@Brian Goldsmith) 1541561246.0

Meanwhile, President Trump has indicated that he would complicate matters for Democrats by launching counterinvestigations.

"Two can play that game!" he wrote.

The president fired Comey on May 9, 2017, an action which, many legal experts say, constitutes grounds for an investigation of Trump for possible obstruction of justice. A New York Times report the following Monday revealed that Trump asked Comey to halt the criminal investigation into Michael Flynn, his former national security advisor. (Flynn would later plead guilty to lying to federal investigators about his conversations with Sergey Kislyak, the former Russian ambassador to the United States.)

Cummings has expressed his belief that the president’s “interference was a blatant effort to deny justice, and director Comey was right to document it as it happened in real time.”