Early Voting Shows Indications of How Battleground States May Go 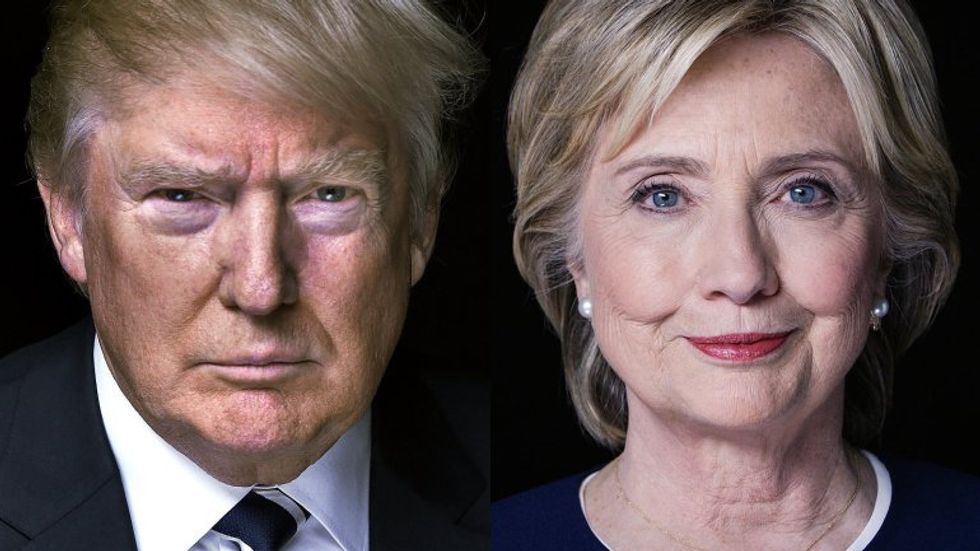 Hillary Clinton and Donald Trump are tightening their grips on the Democratic and Republican presidential nominations.

Donald Trump and Hillary Clinton are encouraging their supporters to hit the polls early, and their efforts appear to be paying off. According to information from Catalist, a data company working to receive detailed early vote return information this year, more than 30 million votes have been cast already across 38 states with early voting in place. Catalist's findings are not results (its voter list connects returned ballots with demographic and registration information, providing clues on who is voting and which party is getting out the vote), but the data shows that about 7.4 million registered Democrats and about 6.4 million Republicans have already cast their votes.

The data suggests that an uptick in participation from Latinos, who historically vote in lower numbers than the electorate overall, might benefit Clinton, the Democratic nominee. Advocates working to expand the Hispanic vote say Trump's controversial immigration proposals and often violent rhetoric about Mexicans and other Latinos are influencing voter turnout. “The Trump candidacy and the climate it’s created has really heightened the importance and the personal nature of this election for Latinos,” said Yvanna Cancela, political director of Culinary Workers Union 226, which represents casino workers in Nevada.

Catalist's data shows the largest increases of early voting by Latinos is taking place in traditionally Republican Arizona. Clinton's running mate, Sen. Tim Kaine of Virginia, delivered an entire campaign speech in Spanish on Thursday evening in Phoenix, where he criticized Trump' s rhetoric about immigrants and stressed his beliefs in diversity and inclusion. “For the first time in a long time Arizona is competitive,” Kaine said in Spanish. “The power of the Latino vote can make a big difference in many states, in a historic way.”

Clinton also campaigned during a pair of appearances in North Carolina on Thursday in which she argued that Trump's policies will impair the African American community. “He has spent this entire campaign offering a dog whistle to his most hateful supporters,” Clinton told a crowd of supporters on the grounds of Pitt Community College. “He retweets white supremacists and spreads racially tinged conspiracy theories.” Clinton also noted that Trump has faced lawsuits and repeated accusations of housing discrimination at his real estate properties and that he continued to proclaim the guilt of the Central Park Five, a group of black and Hispanic men, on assault and rape accusations despite DNA evidence to the contrary. “Do any of us have a place in Trump’s America?” Clinton asked.

On the Republican front, Trump has been bolstered by tightening poll numbers in New Hampshire, a largely white state where support for Clinton appears to be wavering. The campaign has also enjoyed upticks in GOP participation in counties in Ohio that Mitt Romney, the party’s 2012 nominee, carried. Trump also visited North Carolina where he disparaged Clinton as a "candidate of yesterday" and claimed that he is held to a different standard than his Democratic opponent. He also drew attention to a recent inquiry from the FBI into Clinton's use of a private server while she was Secretary of State. “Now she’s got bigger problems. If she were to win, it would create an unprecedented constitutional crisis that would cripple the operations of our government,” Trump said.

A look at early voting data from several battleground states:

About 1.3 million people have already voted. Registered Republicans lead by 71,000 votes, or 5.5 percent. The GOP had a 10 percent advantage over Democrats at this point four years ago, however. The Clinton campaign decided this week to spend an additional $1 million into the state for television ads. Republicans appear to have successfully shored up support. One week ago, they had only an 11,500 lead over Democrats.

Colorado conducts almost the entire election by mail. This bodes well for Democrats, who consistently led Republicans in terms of ballots returned. Democrats are ahead of Republicans by more than 18,500 votes, or about 1.5 percent. Republicans had a lead of more than 33,000 votes, or about 3 percent, at this point four years ago. New polls in Colorado show a tightening race, however. The Democratic lead one week ago was about 5.6 percent and now stands at 1.5 percent.

Republicans have been in the lead in the early vote by about 0.5 percent over the last week. The GOP lead is small, at only about 16,000 votes out of more than 2.7 million cast, at this point in 2008, they trailed Democrats by more than 73,000 votes. Latinos have boosted their turnout by 129 percent from 2008. Among white voters, turnout has increased by 55 percent. The African American share of the electorate has dropped from 2008, but turnout is up by 24 percent. Democrats hope to mobilize Latino voters to overcome the decline in African American votes in the coming days.

About 41,000 more Democrats than Republicans have voted in the state. According to Catalist's data ,their advantage is shrinking as Election Day draws closer, but this also happened when Barack Obama won in 2012.

Registered Democrats are ahead by about 29,000 votes over registered Republicans. That's a drop from the 31,000-vote lead they had on Tuesday, but still a larger lead than they had one week ago. The early vote is critical in Nevada, and Obama relied on early voters to carry the state in 2012.

Democrats are increasing their raw vote advantage over Republicans as more early voting locations open across the state, and registered Democrats are ahead by about 243,000 votes statewide. But Democrats are still lagging behind their pace in 2012, when the Democratic lead was more than 307,000 votes. African American turnout is lower than it was in 2012, dropping to 23 percent of the shared electorate. Turnout might increase as more polling locations open this week, especially in counties with a large black electorate.

Registered Republicans in the state are now ahead of Democrats by almost 66,000 votes, or about 5 points. They were only up by 2.5 points one week ago. That's good news for the GOP, which at this point in 2008 led by a margin of 0.4 percent. Ultimately, the Republicans lost the state that year. Early voting turnout is down across the state; in 2013, the Republican-controlled legislature imposed cutbackss that reduced the number of days of early voting.