Donny Deutsch Just Listed Off the Traits of a Sociopath, and Yeah, They Perfectly Describe Donald Trump 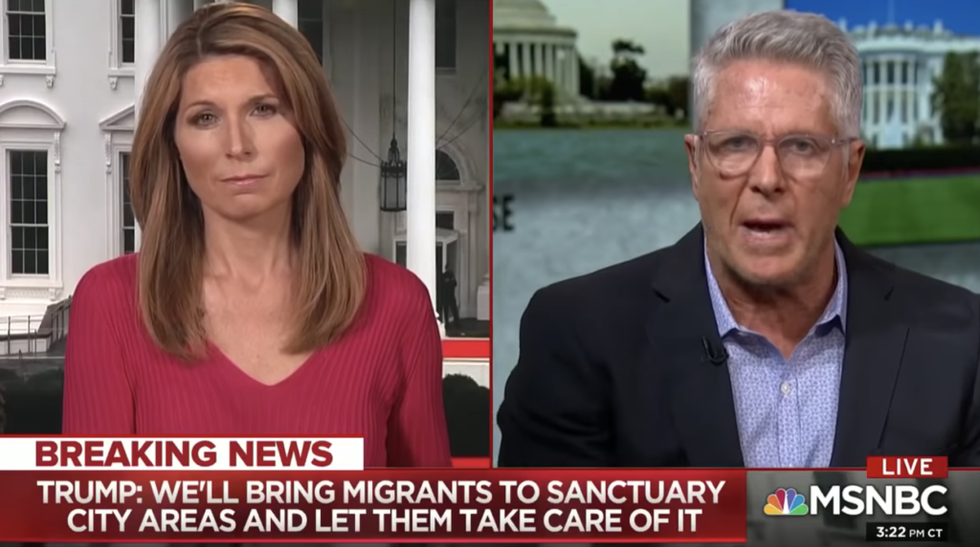 It was reported on Thursday that Donald Trump had tried to push through a plan to dump detained migrants onto the streets of sanctuary cities, such as San Francisco, apparently to retaliate against what he calls "the radical left."

Then on Friday, not only did Trump confirm the report, but conceded that he was still considering such a move.

Due to the fact that Democrats are unwilling to change our very dangerous immigration laws, we are indeed, as repor… https://t.co/sNDauZ3JDv
— Donald J. Trump (@Donald J. Trump) 1555087082.0

He followed that up with:

On MSNBC on Friday, Donny Deutsch reacted to the news with a somber message. After remarking how sad the news had made him, "as a father, as a human," Deutsch asked, "how could anyone, how could a president, act this way?"

"The only explanation is that he is a sociopath."

He then went on to read off a list of the "traits of a sociopath" and yeah, they describe Trump to a tee:

“They never recognize the right of others and see their behaviors as permissible, their victim is merely an instrument to be used. There’s no remorse, shame or guilt, they don’t see others around them as people, but only targets and opportunities.

“Instead of friends they have victims and accomplices who end up as victims. They’re callous and have a lack of empathy. They’re unable to empathize with the pain of their victims, having only contempt for others’ feelings of distress and readily taking advantage of them. They believe they’re all powerful, all knowing, entitled to every wish. No sense of personal boundary and no concern for their impact on others."

@DeadlineWH @DonnyDeutsch @NicolleDWallace This was one of @DonnyDeutsch ‘s finest moments. So eloquent and clearly… https://t.co/rZquATRags
— Deb Pinion (@Deb Pinion) 1555117441.0

@DeadlineWH @DonnyDeutsch @NicolleDWallace As true a statement about the pathology of trump as you will hear. The s… https://t.co/z80axrNAJF
— Kapers (@Kapers) 1555155952.0

And the sadness was palpable.