Donald Trump Just Explained Why He Admires Kim Jong Un So Much, and Yep, He Wants to Be a Dictator 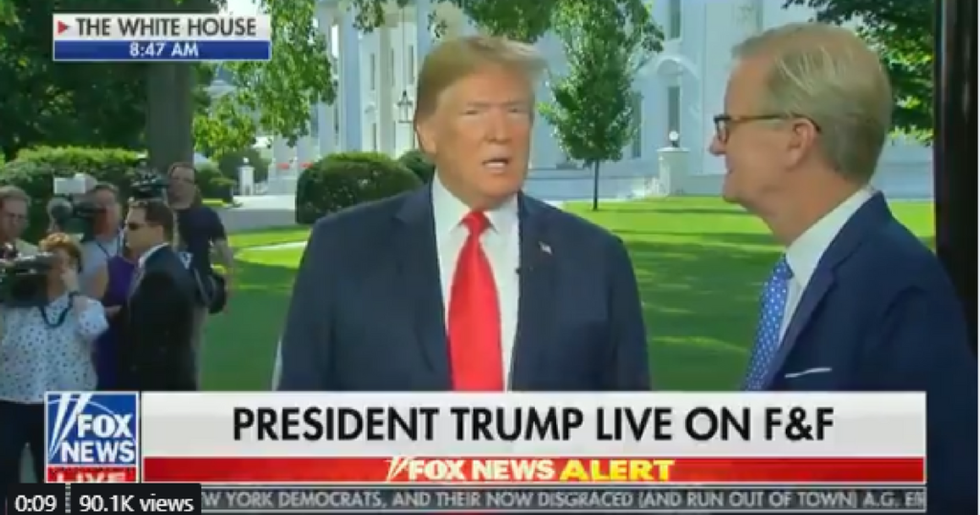 President Donald Trump told a Fox News reporter that he'd like to command the same level of dictatorial respect that Kim Jong Un, the North Korean dictator with whom Trump met in Singapore earlier this week, receives from his subordinates.

"He's the head of a country, and I mean he's the strong head. Don't let anyone think anything different," Trump told Steve Doocy of Fox News. "He speaks and his people sit up at attention. I want my people to do the same."

Doocy had asked Trump if "we are close to seeing" Kim at the White House. Trump replied that "he would have him" and "it's something that could happen."

The president then expressed admiration for Kim, whom he described as a "strong head" of his country.

This is not normal. These are things wannabe dictators say.

This isn't the first instance of Trump sharing his respect for the power wielded by Kim, who took over North Korea in 2011 upon the death of his father, Kim Jong Il.

On Wednesday, Trump told Bret Baier of Fox News he sees Kim as a "smart guy" and a "great negotiator."

“He’s a tough guy. Hey, when you take over a country, tough country, tough people, and you take it over from your father, I don’t care who you are, what you are, how much of an advantage you have, if you could do that at 27 years old, I mean, that’s one in 10,000 that could do that,” Trump gushed. “So he’s a very smart guy, he’s a great negotiator, but I think we understand each other.”

Trump is facing some heat Thursday after he went against presidential norms by saluting a North Korean general… https://t.co/BAYXCQ1clS
— POLITICO (@POLITICO) 1528996916.0

Critics slammed the president for paying respect to an adversarial nation like North Korea, with whom the United States has only barely begun to have diplomatic relations. White House Press Secretary Sarah Huckabee Sanders defended the president, saying the salute was "common courtesy."

In addition to heaping praise onto North Korea, Trump has strained relations with some of the United States' closest allies, such as Canada, by imposing tariffs and blowing up last week's G7 conference in Canada. Trump's insistence that Russia be allowed back into the G7 further demonstrates his attraction to authoritarian leaders.

Perhaps even more disturbing than Trump's adulation for Kim, however, is the willingness of members of the Republican Party to imply that Trump's power is unchecked and absolute.

On Wednesday, Republican Party Chair Ronna McDaniel tweeted: "anyone that does not embrace" Trump's agenda of "making America great again will be making a mistake." The New York Times has described McDaniel to be “unfailingly loyal to Trump."

Complacency is our enemy. Anyone that does not embrace the @realDonaldTrump agenda of making America great again will be making a mistake.
— Ronna McDaniel (@Ronna McDaniel) 1528939320.0

McDaniel's tweet comes a day after Representative Mark Sanford (R-SC) lost his primary bid for reelection. Sanford had refused to say whether or not he supports the president, which in the age of Trump, is becoming a death knell for Republicans' political careers.

"We swear an allegiance to the Constitution and we pledge allegiance to the flag," Sandford told MSNBC's Morning Joe, "and what was weird about this race that I've never experienced before in any race I've been a part of was an allegiance question where people say, 'Are you for or against the president?'"

"I've never before had a question of allegiance to a person, rather than allegiance to the flag and Constitution, and to a degree that's what this race came down to," he added.

On Tuesday, Trump tweeted support for Sanford's opponent, Katie Arrington, after saying Sanford had been "very unhelpful to me in my campaign to MAGA."