Donald Trump Just Tried to Speak Off the Cuff About the Notre Dame Fire, and People Are Pretty Sure He Doesn't Know What Notre Dame Is 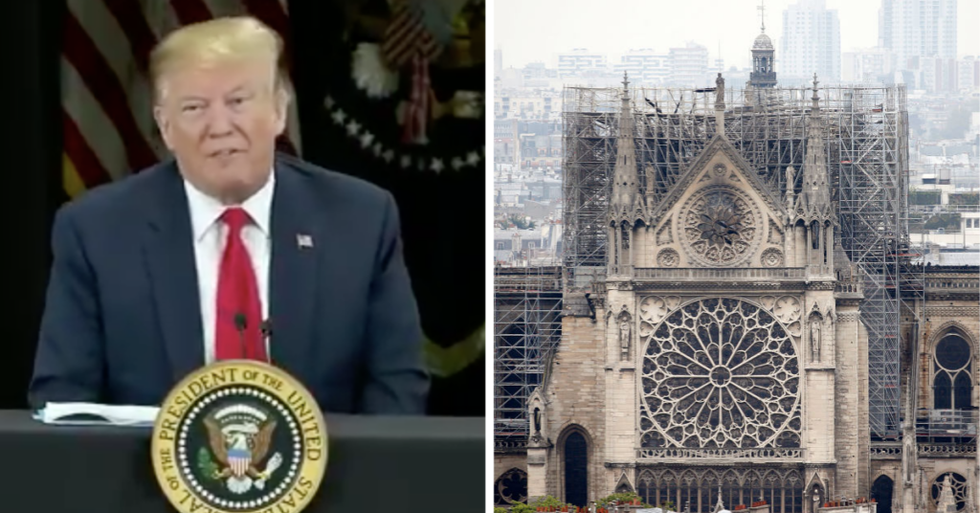 A day after the enormous fire that broke out at Paris's historic Notre Dame Cathedral, President Donald Trump, speaking at a Tax Day roundtable in Minnesota, seemed to go off script a bit when describing the fire and the cathedral itself.

I will tell you the fire they're having at the Notre Dame cathedral is something like few people have witnessed. When we left, we had a whole group of your great representatives, and when we left [Air Force One] it was burning at a level that you rarely see a fire burn.

But then it got a little weird:

It is one of the great treasures of the world, the greatest arts in the world. If you think about it, it might be greater than almost any museum in the world and it is burning very badly.

People wondered, does he even know what Notre Dame is? Was he confusing it with the Louvre?

The president's off-the-cuff comments came just a day after he courted controversy by suggesting that firefighters should employ “flying water tankers” to quench the fire.

The French Civil Security agency, which is part of the French Ministry of Interior responded soon after, pointing out that dropping water from the air onto the building could cause the entire structure to collapse.

"The weight of the water and the intensity of the drop at low altitude could indeed weaken the structure of Notre-Dame and result in collateral damage to the buildings in the vicinity," tweeted the agency, which is part of the French Ministry of Interior.

The president was harshly criticized for that statement.

The president's remarks were a far cry from those issued by his wife, First Lady Melania, and Vice President Mike Pence.

Yesterday, the First Lady tweeted that her "heart breaks for the people of Paris."

My heart breaks for the people of Paris after seeing the fire at Notre Dame Cathedral. Praying for everyone’s safety.
— Melania Trump (@Melania Trump) 1555351535.0

Pence, meanwhile, said Notre Dame is "an iconic symbol of faith to people all over the world."

French President Emmanuel Macron will hold a Cabinet meeting tomorrow dedicated to the national fundraising campaign and reconstruction work for the landmark, which has survived several fires and many wars since it was completed in the 13th century.