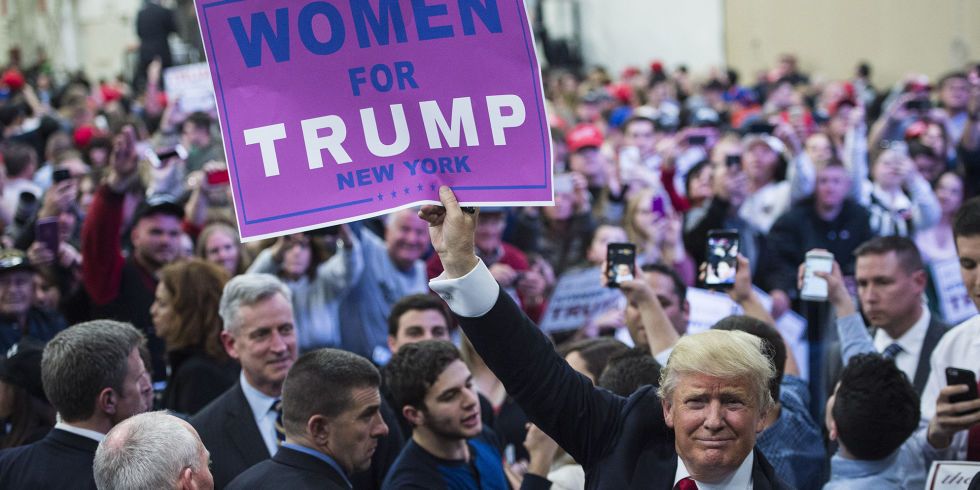 In the last 24 hours, four women have now stepped forward publicly to challenge Donald Trump's statement at the second presidential debate that he did not kiss or grab women as he had boasted on the leaked Access Hollywood tape from 2005.

Natasha Stoynoff, a reporter with People Magazine, published a detailed account late last night of how Trump forced himself on her when she'd gone to his resort to interview him for a piece. In December 2005, Stoynoff traveled to Trump’s Mar-a-Lago estate to speak to him and his wife, Melania, for a feature on their first wedding anniversary. The interview went well and afterward, while Melania went to change her wardrobe for more photos, Trump volunteered to take Stoynoff on a tour of the mansion. “There was one ‘tremendous’ room in particular, he said, that I just had to see,” she recalled. Within seconds of entering that room, Trump pushed her against the wall and forced his tongue down her throat.

“Now, I’m a tall, strapping girl who grew up wrestling two giant brothers. I even once sparred with Mike Tyson. It takes a lot to push me. But Trump is much bigger––a looming figure––and he was fast, taking me by surprise and throwing me off balance. I was stunned." Stoynoff was grateful when Trump’s longtime butler came in to inform them that “Melania would be down shortly.” After the butler left, Trump boasted: “You know we’re going to have an affair, don’t you? Have you ever been to Peter Luger’s for steaks? I’ll take you. We’re going to have an affair, I’m telling you.”

Stoynoff left for the airport the following day, but not before keeping her appointment with a massage therapist at the Mar-a-Lago spa. She arrived late, and she offered to pay the therapist his full hourly rate for a 30-minute session. The therapist told her that Trump had waited for her in the massage room for 15 minutes before he had to leave for a meeting. Stoynoff decided against reporting the incident to her managing editor. “[But] like many women, I was ashamed and blamed myself for his transgression. I minimized it (“It’s not like he raped me…”); I doubted my recollection and my reaction,” she wrote. “I was afraid that a famous, powerful, wealthy man could and would discredit and destroy me, especially if I got his coveted People feature killed.”

A second woman, Mindy McGillivray, told the Palm Beach Postthat Trump groped her backstage at a Ray Charles concert in 2003. She never reported it to the authorities. “Ray already performed. He’s ready to leave. He’s saying his goodbyes to everyone,’’ McGillivray recalled. “All of a sudden I felt a grab, a little nudge. I think it’s Ken’s camera bag, that was my first instinct. I turn around and there’s Donald. He sort of looked away quickly. I quickly turned back, facing Ray Charles, and I’m stunned.’’

McGillivray’s friend, official Trump photographer Ken Davidoff, remembered the moment McGillivray took him aside to tell him, “Donald just grabbed my ass!” Though he did not witness the incident, he said he does not doubt McGillivray’s honesty. McGillivray kept relatively quiet about the incident for years, only speaking up more after Trump entered the presidential race. McGillivray supported Bernie Sanders in the primaries, but says she intends to vote for Hillary Clinton in the upcoming election. “It’s important “to set a good example for my daughter,’’ she said. “It’s a respect issue for all women. If something like this happens to you, you should speak up.’’

Jessica Leeds, a retired businesswoman, remembered the moment Trump groped her as he sat beside her in the first-class cabin of a flight to New York three decades ago. They had never met before. About 45 minutes after takeoff, Trump lifted the armrest, grabbed her breasts,

and tried to put his hand up her skirt. Leeds fled to the back of the plane. “He was like an octopus,” she said. “His hands were everywhere.” Leeds said she did not complain to airline staff at the time because such unwanted advances were common throughout her time in the business world in the 1970s and 1980s. “We accepted it for years,” she said. “We were taught it was our fault.”

Leeds began sharing her story with more people, including her son, a nephew, and two friends, after Trump launched his presidential bid. “It made me shake,” said Linda Ross, a neighbor and friend whom Leeds confided in. The New York Times spoke with the the people she’d told and obtained independent corroboration that she had discussed the incident long before with them.

Rachel Crooks was a 22-year-old receptionist at Bayrock Group, a real estate investment and development company in Trump Tower in Manhattan, when she met Donald Trump in an elevator. Knowing that her company did business with Trump, she introduced herself. They shook hands, but Trump would not let go. Then “he kissed me directly on the mouth. It was so inappropriate. I was so upset that he thought I was so insignificant that he could do that.”

Crooks returned to her office and called her sister, Brianne Webb, to tell her what had happened. “She was very worked up about it,” said Webb. “Being from a town of 1,600 people, being naïve, I was like ‘Are you sure he didn’t just miss trying to kiss you on the cheek?’ She said, ‘No, he kissed me on the mouth.’ I was like, ‘That is not normal.’”

These personal accounts come on the heels of the discovery of more damaging tapes, including a 1992 Entertainment Tonight Christmas feature revealed yesterday where Trump speaks to a 10-year old girl passing him on the escalator and states that he'd be dating her in 10 years (Trump would have been 46 years old at the time).

In recently uncovered radio interviews with Howard Stern, Trump describes coming into dressing rooms during beauty pageants he owned where contestants were still undressed. “I’ll tell you the funniest is that I’ll go backstage before a show and everyone’s getting dressed,” Trump tells Stern in a 2005 recording. “No men are anywhere, and I’m allowed to go in, because I’m the owner of the pageant and therefore I’m inspecting it…. ‘Is everyone OK’? You know, they’re standing there with no clothes. ‘Is everybody OK?’ And you see these incredible looking women, and so I sort of get away with things like that.”

An account by the former Ms. Arizona squares with Trump's own admissions on the Howard Stern show. Tasha Dixon, who was 18 at the time, remembered that Trump came “strolling” into dress rehearsals for the pageant while the contestants were “half-naked.” People who worked for Trump also urged the contestants to “walk up to him” and “fawn all over him,” according to her account. "Who do you complain to? He owns the pageant," she said. "There's no one there to complain to. Everyone there works for him."

In response to the growing testimonials against Trump, Slate published a complete and updated list of women who allege Trump sexually assaulted them. As that list grows, Trump's standing with women voters continues to plummet. Efforts by Trump surrogates to defend his statements and actions often result in further evidence of tone deafness. His chief supporter in Congress, Senator Jeff Sessions, went as far as to claim that what Trump was discussing does not constitute assault. “I think that's a stretch. I don't know what he meant,” Sessions said at the time.

Meanwhile, some of Trump's followers on Twitter, lamenting the effect women are having on Trump's chances, are now clamoring for a repeal of the 19th Amendment granting women the right to vote.

But with women now forming a majority of voters, and the 19th Amendment not ever going away, the issue of sexual assault and the increasing hostility with which female voters view Trump could result in an election day disaster for him. Trump has less than four weeks to change perceptions and refocus his campaign, but his latest threats to continue bring up Bill Clinton’s sexual misconduct is likely to only reinforce negative perceptions and keep the subject matter front and center for the duration of the remaining time.