Donald Trump Just Made a Bonkers Argument in Favor of Voter ID, and Twitter Is Dragging Him Hard 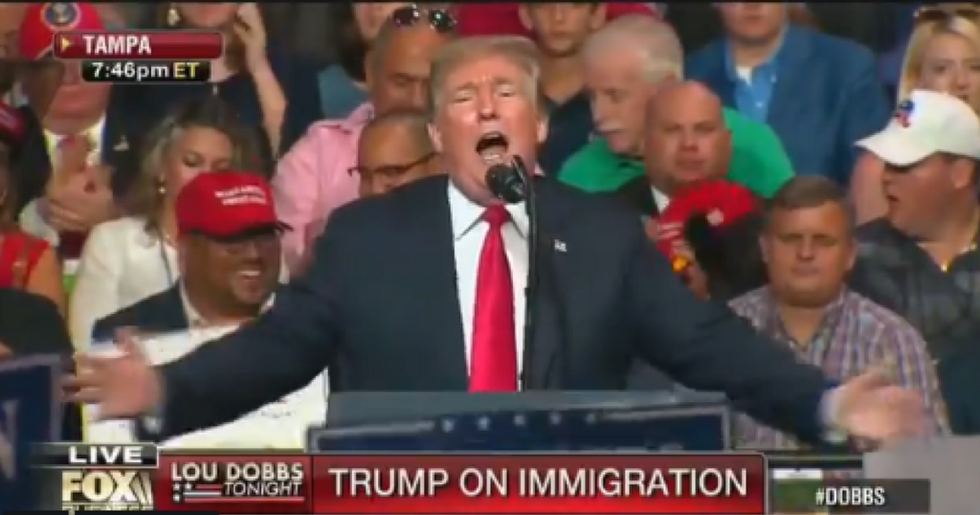 During a campaign rally in Tampa Florida last night in support of Florida Republican gubernatorial candidate Ron DeSantis, President Donald Trump insinuated that voter fraud is a problem in American elections (it's not). After calling for people to be required to have voter IDs, Trump made a startlingly odd claim involving IDs and grocery stores.

"Only American citizens should vote in American elections," Trump groaned. "The time has come for voter ID, like everything else."

As applause thundered through the Florida State Fairgrounds Expo Hall, Trump expanded on the necessity of having an ID - by claiming photo IDs are required to buy groceries.

"You know if you go out and you wanna buy groceries, you need a picture on a card," the president proclaimed, hinting that the billionaire has never actually set foot in a grocery store. "You need ID."

No, a photo ID is not required to buy groceries.

Leggum added that in any other time, "this would be a gaffe that would hound him for years."

Before Trump, this would be a defining gaffe that would hound him for years. Remember when John Kerry was pillori… https://t.co/9m9XbvoYUU
— Judd Legum (@Judd Legum) 1533083764.0

Of course, these are not normal times, and Trump is not a typical president. Leggum compared Trump's remarks to the time President George H.W. Bush was criticized for being "out of touch" because he didn't know how to work a grocery store scanner. The story made the front page of the New York Times in 1992.

This is akin to in Arrested Development when Lucille Bluth asks: "how much can a single banana cost, $10?"

Twitter dragged Trump's words and accused him of being out of touch.

"Out of touch much?"

@CheebaJones @JuddLegum Out of touch much? I wonder how his salt of the earth middle American supporter will feel about that?
— Sandra Adair (@Sandra Adair) 1533084989.0

But will Trump's supporters care? Probably not.

Trump has "never gone grocery shopping in his life." Quite possible.

How long until the president's supporters begin further drilling this false narrative into the national dialogue?

Some people hypothesized why Trump may have needed an ID at a grocery store - if he's ever been to one.

It's not a secret that Trump has a less-than-stellar reputation for paying his debts.

And his words are often full of hot air.

Is "grocery purchase fraud" a thing?

Twitter also went nuclear with the memes. Oh, the memes.

"Things get bought & paid for all the time without ID, like when #Putin bought #Trump."