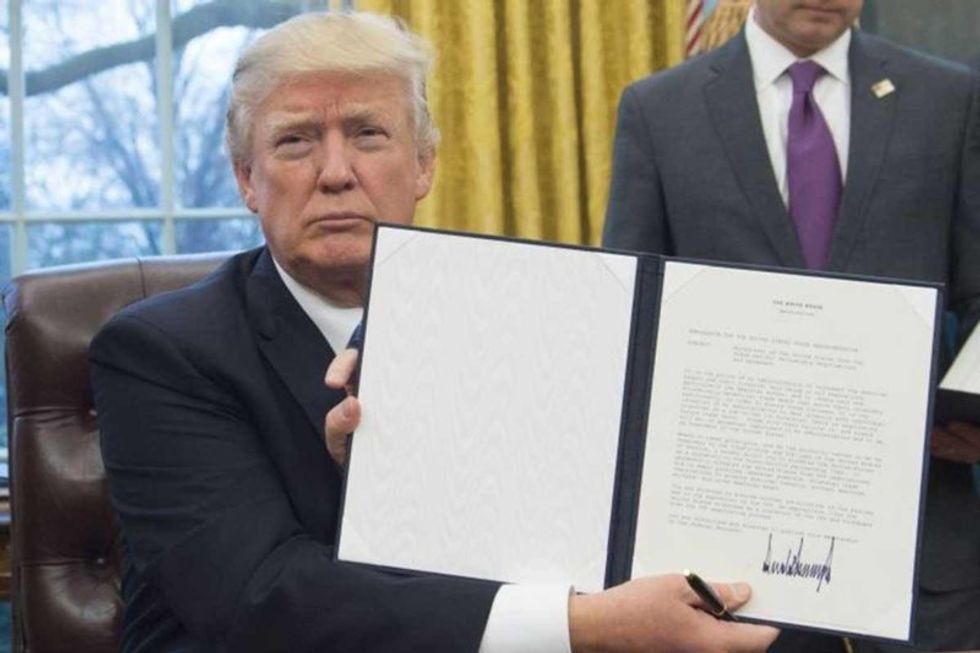 Following the mass shooting at Texas church on Sunday, the largest shooting at a place of worship in our nation's history, President Donald Trump said on Monday that what caused the massacre "isn't a guns situation" but instead "a mental health problem at the highest level." He was speaking in Japan at a joint press briefing with Prime Minister Shinzo Abe. "Mental health is your problem here," Trump reiterated.

However, back in February of this year, Trump signed a bill that rolled back an Obama-era gun regulation that would have made it harder for people with mental illness to buy firearms. The regulation was aimed at keeping guns out of the hands of the severely mentally ill.

In the wake of the Texas shooting massacre that left 26 dead, including 14 children, and 20 others injured, gun control advocates are condemning Trump as a hypocrite for signing the gun-regulation-nixing bill and then 8 months later blaming the shooting on a "mental health problem."

"Trump is wrong — study after study show that stronger gun laws can save lives — and a hypocrite of the worst kind," Peter Ambler, the executive director of Giffords, the gun control group started by former Rep. Gabrielle Giffords, told NBC News. "One of his first actions as president trashed a new regulation that would have prevented potentially irresponsible and mentally incompetent people from being able to buy guns."

"Blaming mental health is a tactic straight out of the gun lobby's playbook that's meant to paralyze Congress. Donald Trump's goal is to make people think our leaders don't have the power to prevent gun violence," Ambler added.

To keep reading, continue to the second page...

Democratic Senator Richard Blumenthal of Connecticut also spoke out after the shooting, stating that Congress must enact gun regulation laws despite any issues of mental health: "Any link between mental health and gun violence in a particular situation cannot be used as an excuse for inaction on common sense gun violence measures."

"It is the height of hypocrisy for President Trump — who called the latest tragic mass shooting 'a mental health problem at the highest level' — to have rolled back a rule specifically designed to prevent some gun violence deaths," Blumenthal added in a statement.

It is not clear if the rule would have applied to the gunman in the Texas church shooting, identified as Devin Patrick Kelley. Kelley was previously court-martialed from the Air Force for assaulting his first wife and child, arrested for animal cruelty, and was known for harassing ex-girlfriends.

In addition, Texas has no assault weapon legislation. You do not need a license to carry a long gun, nor do you need to pass a background check.