The Trump Campaign Is Getting Dragged for Replacing People Sitting Behind Donald Trump at His Montana Rally, and the Internet Has a New Hero 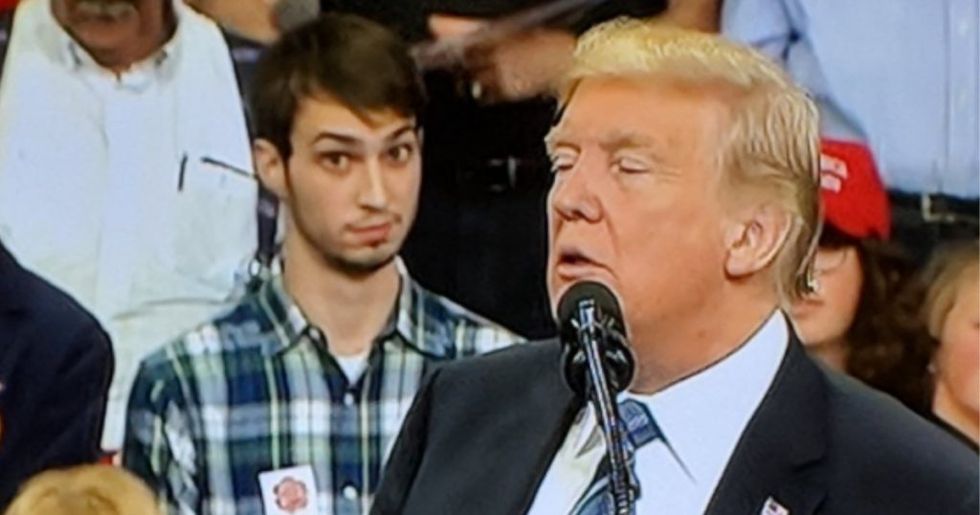 At a Montana MAGA rally Thursday night, a man in a plaid shirt standing behind President Donald Trump was removed because he couldn't hold back his disbelief over what the president was saying.

Trump was boasting about how easy it is to win the popular vote, which he lost handily to Hillary Clinton in 2016.

So about the man in the plaid shirt standing behind Trump at his Montana rally last night who was switched out midw… https://t.co/z1OnS2jGq1
— Andrew Wortman (@Andrew Wortman) 1536324560.0

"It's hard, it's harder to win than [the] popular vote," Trump said of the Electoral College. "Popular vote you go to three, four states boom boom boom."

At this point, plaid shirt guy's face is like, "wait, what?" right before Trump says: "It's like the hundred-yard dash versus running the mile, you practice differently."

"What, what?" our friend in plaid can be seen uttering. His expression turned to surprise again when Trump struggled to pronounce the word, "anonymous" - twice - while ranting about a New York Times op-ed.

And when Trump said that he and his campaign have "picked up a lot of support," Plaidman says, "have you?"

@DonnaBesneatte @RanttMedia this was one of my favorites ‘we’ve picked up a lot of support’ plaid shirt guy ‘HAVE Y… https://t.co/EjFeUjksZz
— Katie Moeser (@Katie Moeser) 1536304374.0

Plaidman was escorted away and replaced by someone more willing to smile through the president's borderline-incoherent speech, which at this point was peppered with Trump's greatest hits - immigration, trade, tax cuts - the usual.

And it wasn't just our hero - others around him were asked to leave as well.

Like this girl, who mouthed "wow" when Trump dropped a "fake news" bomb.

The whole section of "supporters" behind Trump looked bored, to be honest.

Probably because they aren't billionaire beneficiaries of Trump's tax cuts.

@TheViewFromLL2 @dave_in_sa @allanbrauer He announces THE BIGGEST TAX CUT IN THE HISTORY OF THIS COUNTRY and not on… https://t.co/vRibqU7pz0
— Julia Gulia (@Julia Gulia) 1536325903.0

Naturally, Plaidman was turned into a gif.

He had the internet cheering.

He got marriage proposals.

What must he have been feeling?

His loss was deeply felt.

There was also a girl behind Trump wiping her nose with an American flag handkerchief.

Good help is so hard to find these days.