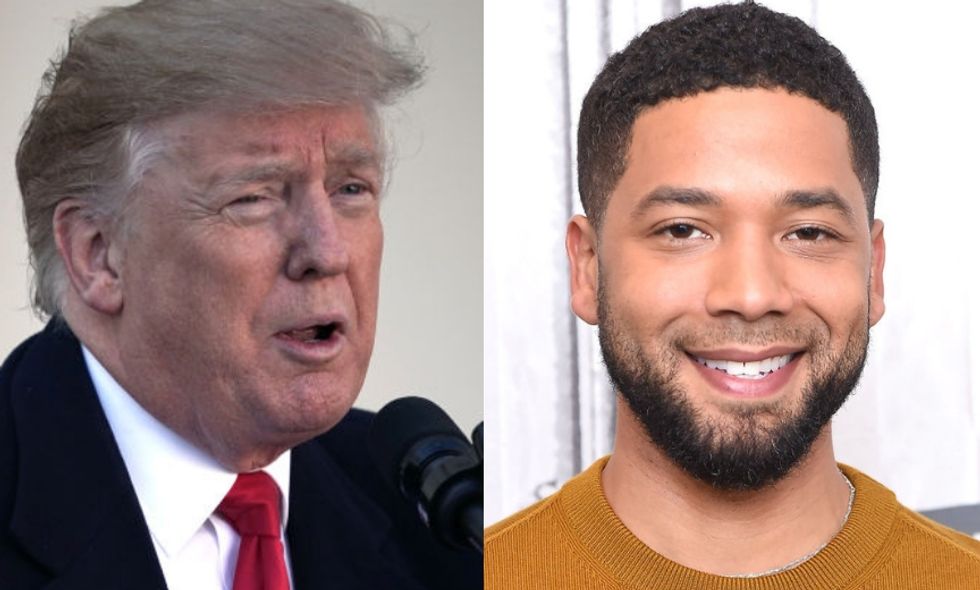 Many across the nation were horrified whenthe news broke that Empire actor Jussie Smollett had been targeted in a racist and homophobic attack.

Smollett was walking home from a fast food place in Chicago when he was attacked by two men in ski masks. The attackers put a rope around Smollett's neck and poured an unknown liquid on his skin while berating him with racial and homophobic slurs. They also reportedly yelled "MAGA Country," invoking President Donald Trump's 2016 campaign motto, "Make America Great Again."

Now, Trump has addressed the attack...sort of.

When asked about the attack on Smollett, Trump said:

"That I can tell you is horrible...I think that's horrible. It doesn't get worse as far as I'm concerned.

Then it took a turn:

As far as the people are concerned, many of those people wanted me to stay out, but I didn't want to do it because people were getting hurt. What I think is the worst sin of all is the fact that we're allowing people to come into this country and sell drugs and human traffic and do all these horrible things..."

And suddenly Trump's answer wasn't about Jussie Smollett at all, but instead about—you guessed it—a wall.

"If we had the simplicity of a well-constructed, beautiful barrier or wall, they wouldn't be able to come into our country. That, to me, is the great sin, and everybody knows it works."

Trump proceeded to discuss the morality of walls and their effectiveness for another two minutes without mentioning Smollett again.

People were disgusted by the callousness of Trump's response.

We almost preferred the nonresponse. #JussieSmollett https://t.co/tApe6OGEJS
— The Advocate (@The Advocate) 1548965701.0

@ABC As part of trumps response he immediately launched into how the lack of a wall was making America suffer. Insu… https://t.co/IOSlKIEqlg
— Pugmother (@Pugmother) 1548958671.0

@ABC aaand back to the wall. The wall that will save America from EVERYTHING! Even racist homophobic attacks from homegrown white people!
— Butterfly (@Butterfly) 1548960851.0

Some, however, were capable of sending sincere well wishes for Smollett.

Celebrities and politicians alike expressed outrage at the attackers while wishing Smollett a full recovery.

None of them made it about a wall.

This is heartbreaking and terrifying...please pay attention to what’s happening here. Sending all my love to… https://t.co/xAKE4hVjn9
— Zendaya (@Zendaya) 1548781202.0

The attackers remain at large.