Donald Trump Jr. Is Live Tweeting the Michael Cohen Testimony and Twitter Is Making Him Seriously Regret It 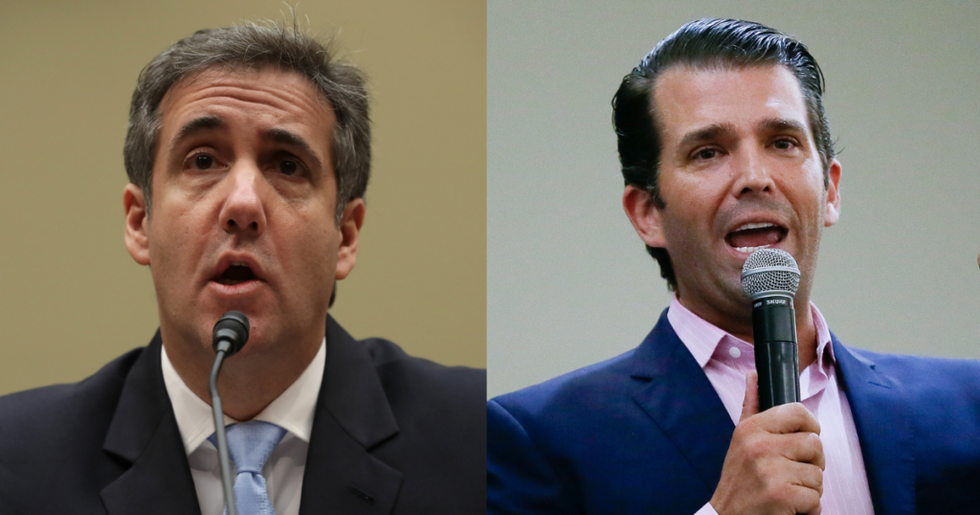 Donald Trump Jr. has been live-tweeting about Michael Cohen's House Oversight Committee testimony and it is a sight to behold.

Shortly after the hearing got under way, Junior wrote on Twitter that Cohen's testimony "sounds like a breakup letter."

In his statements to the Committee, Cohen said that Junior told his father, Donald Trump, the Republican nominee for president at the time, about the infamous 2016 Trump Tower meeting with Russian operatives promising to deliver dirt on Hillary Clinton.

Cohen also said Trump once told him that his eldest son "had the worst judgment in the world."

Clearly, since Junior obviously failed to read this whole tweet before retweeting it:

Cohen added that "nothing went on in Trump world, especially the campaign, without Mr. Trump's knowledge and approval."

@DonaldJTrumpJr "Mr. Trump had frequently told me and others that his son Don Jr. had the worst judgment of anyone in the world."
— Hawk or Handsaw? (@Hawk or Handsaw?) 1551282046.0

"This is the fourth iteration of the story and even his own lawyer retracted it in Aug 2018," Junior tweeted of Cohen. "Amazing how he remembers this but couldn’t remember to pay millions in taxes."

You'll recall that it was Junior who said of the possibility of the Russians providing damaging information on Clinton: "if it's what you say, I love it."

@DonaldJTrumpJr How many iterations of the Trump Tower meeting have you given?
— Frank Stuart (@Frank Stuart) 1551282952.0

Junior did not fare any better when he suggested Cohen was trying to save his own hide.

"Funny how things change when you’re trying to save your ass."

Cohen will begin serving a three-year prison sentence in May for his role in various crimes - including lying to Congress, tax evasion, and campaign finance violations - in which he has named Trump, "Individual-1," as a co-conspirator.

Junior, on the other hand, doth protest too much.

Recall that Junior tried to save face about the Trump Tower meeting by claiming it was about adoptions. Trump helped Junior draft the false statement.

Junior also accused Cohen of "begging" for a job in the White House.

If Junior really believes this, perhaps he should testify under oath...

In his testimony, Cohen said he turned down offers to work in the West Wing.

Junior said that Cohen "just wants to be famous."

Junior also implied that Cohen's lawyer, Lanny Davis, has been secretly working on behalf of the Clintons. He offered no evidence for this.

@DonaldJTrumpJr How many felonies do you think Cohen will implicate you in before 2pm? I think the count is already at 3.
— Treason Stickers (@Treason Stickers) 1551287387.0

RT @realDonaldTrump: Michael Cohen was one of many lawyers who represented me (unfortunately). He had other clients also. He was just disba…
— Donald J. Trump (@Donald J. Trump) 1551284733.0

Unfortunately for the Trump clan, Cohen has little to gain besides personal redemption and would face additional charges if he lies to Congress again.