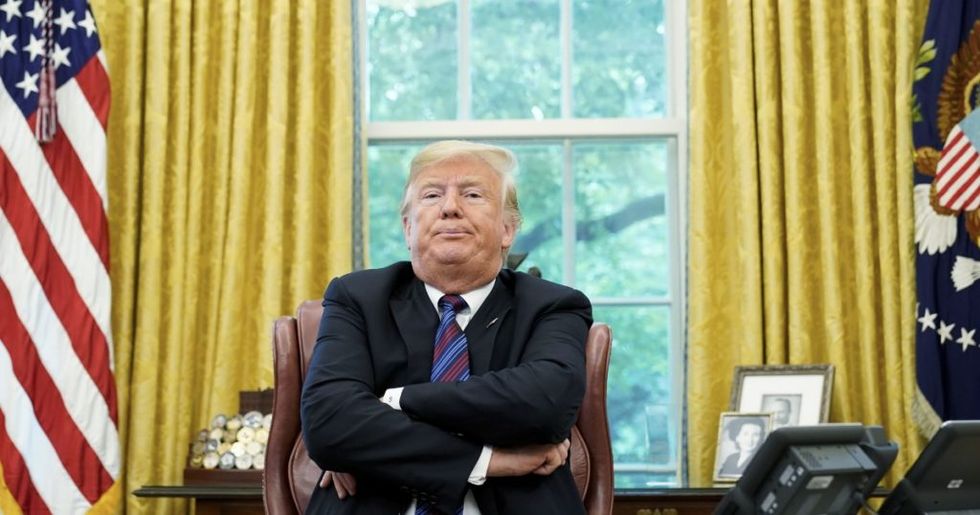 US President Donald Trump speaks to reporters after a phone conversation with Mexico's President Enrique Pena Nieto on trade in the Oval Office of the White House in Washington, DC on August 27, 2018. - President Donald Trump said Monday the US had reached a 'really good deal' with Mexico and talks with Canada would begin shortly on a new regional free trade pact.'It's a big day for trade. It's a really good deal for both countries,' Trump said.'Canada, we will start negotiations shortly. I'll be calling their prime minister very soon,' Trump said.US and Mexican negotiators have been working for weeks to iron out differences in order to revise the nearly 25-year old North American Free Trade Agreement, while Canada was waiting to rejoin the negotiations. (Photo by MANDEL NGAN / AFP) (Photo credit should read MANDEL NGAN/AFP/Getty Images)

President Donald Trump holds deep contempt for Attorney General Jeff Sessions, according to Bob Woodward's new book Fear: Trump in the White House. In his book, Woodward writes that Trump referred to Sessions as a "traitor" and "dumb Southerner."

Excerpts of Fear were published by the Washington Post on Tuesday.

Woodward writes that while speaking to then-staff secretary Rob Porter, Trump said Sessions was a "traitor" for recusing himself from Special Counsel Robert Mueller's Russia investigation.

He’s this dumb Southerner. … He couldn’t even be a one-person country lawyer down in Alabama.

Trump's treatment of Sessions is an affront to his conservative base, a voting bloc that dominates the South and helped propel Trump to victory over Hillary Clinton in 2016. Trump swept the former Confederacy - including Sessions' home state of Alabama and its neighbors Mississippi and electoral-rich Florida - in large part because of southern white voter turnout.

Sessions has drawn the ire of Trump as Mueller's team of prosecutors close in on the president. Most recently on Monday, Trump berated Sessions on Twitter for pursuing criminal charges against two Republican Congressman who supported his presidential run.

Senator Lindsey Graham (R-SC) has described Trump's relationship with Sessions as "beyond repair."

Retiring Tennessee Republican Senator Bob Corker responded by saying Trump's treatment of Sessions is "unbecoming of a 71 or 72-year-old president."

Bob Corker to me about Trump's demeaning comments on Sessions in Woodward book: “If the president doesn’t like his… https://t.co/pJgGqKIcB9
— Manu Raju (@Manu Raju) 1536087673.0

Social media users threw Trump's words back into his face.

Others within the president's inner orbit were also subject to his insults, Woodward claims.

Trump didn't hold back on anyone.

Woodward says the Trump also insulted Commerce Secretary Wilbur Ross. "I don’t trust you," Trump said to Ross. "I don’t want you doing any more negotiations. … You’re past your prime."

Trump expressed additional frustration with the National Security Council last year, according to Woodward. At one meeting, Woodward writes, Trump thrashed his military advisers over the lack of progress in the War in Afghanistan.

"The soldiers on the ground could run things much better than you," Trump told generals on the NSC. "They could do a much better job. I don’t know what the hell we’re doing." Trump then added: "How many more deaths? How many more lost limbs? How much longer are we going to be there?"